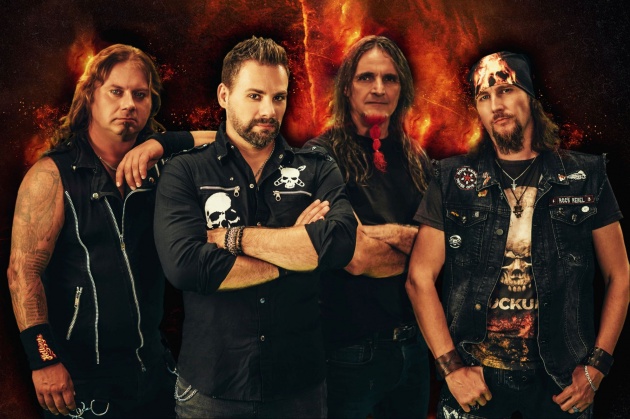 Serious Black have a musical pedigree that many bands would die for.

Featuring ex members of Helloween, Blind Guardian and Tad Morose, the genesis of the power metal group can be found backstage at a 2013 concert where bass player Mario Lochert and guitarist Roland Grapow struck up a conversation which led to a series of events which culminated in the birth of a new superpower.

With five albums already under their belt since their debut As Daylight Breaks in 2015, Serious Black are now preparing for the launch of their sixth full length, Vengeance Is Mine, on February 25.

Lochert joined HEAVY to chat about the album.

“The story about this album is also based on true stories and what happened in our life,” he explained. “That’s why the album title is called Vengeance Is Mine“.

After veering into progressive rock territory with their most recent albums, Lochert is quick to stress that with a new vocalist on board for Vengeance Is Mine that fans will finally see Serious Black return to the more traditional power metal style for which they are known.

“We started as a power metal band with the first album, then we drifted, and I was not really happy about it,” he began. “The singer wanted to go in to a melodic, prog rock band direction but now he has left, and it was time to make a power metal album again. I think the success we’ve had so far with this album is very good, also the media has had the most clicks. We have a lot of interviews, and this is the first time we have had Australian interviews and I’m really proud and happy about it.”

In the full interview Mario talks more about the songs on Vengeance Is Mine, the personal nature of some of the lyrics, the album opener Rock With Us Tonight and how it sets the tone for the rest of the album, the early days of the band and how they formed plus more.