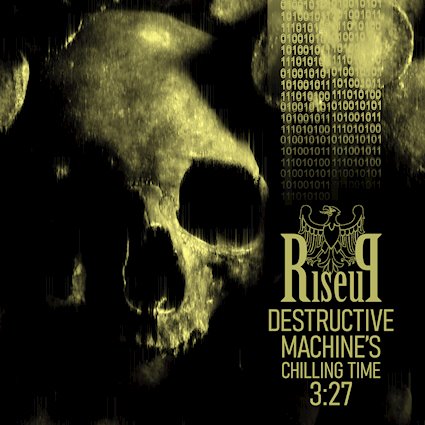 What’s that, you say, Death-Groove Metal from Poland? You have my fucking attention, even though that’s at least one too many words for a genre.

Sub-sub-genre hate aside, I’ll get to reviewing this 11-track album from RiseuP titled Destructive Machine’s Chilling Time 3:27. That’s a mouthful isn’t it, and just for that, that’ll be about four words less in this review each time I’m made to repeat it.

Rise introduces us to the album with some very detuned heavy thumping chugs, and I’m very much already liking where this is going. Enter double kick, and a blend of spoken and heavy vocals, and the song is on its way. It’s a groovy number that blends varied vocals styles throughout. Not a super heavy, or super-fast track, just a bouncer that always maintains a solid rhythm that you can slowly band your head to. Not a bad opener!

Next up is UNfaith which picks up the pace and hammers you straight in the face right from the get-go. Triple layered vocals in the chorus add an interesting element that pricks the ears up, and the verses introduce some semi-rapped vocals that you would have heard back in the good ol’ nu-metal days. Let’s not throw ‘em in that basket just yet though because these guys are actually pretty damn heavy, especially when the song reaches a very mechanical Fear Factory sounding breakdown.

I could easily confuse the opening of the following track Crown as a track by Lamb Of God or Devildriver as it sits precisely in the Modern Metal and Groove Metal niches. These guys really capture the essence of groove and bounce that is missing in a lot of recent metal. Probably my favourite track so far, with another killer breakdown mid-song!

Digital Whore starts with some clean strumming, then heavies up with some chugs and a strange sounding out of place spoken word voice over. As the songs hits it’s verses it takes me back to a sound we heard coming out of Bakersfield many years ago. The choruses shift quickly and take us back to that groove metal vibe, which saves it from sounding too Nu.

I’m struggling to hear where the whole “death metal” claim comes into this, but maybe it came from one of those boomers that call anything with heavy guitars and screamed vocals Death Metal.

Fire Still Burning commences with some heavily effected clean guitars which build a spacious atmosphere. A quick slap in the face with a whammy pedal or two throws us into the first verse with those multi layered vocals again, and before we know it we are full blast into a heavy punk style beat with quick sharp vocals. It’s a bit hard to actually tell where the verses, choruses, and bridges sit, and which is which, but it doesn’t really matter because the track is quite an enjoyable adventure.

A 30-second noise track titled Inglorious 13 inserts itself here, and makes absolutely no sense. So, we’ll just leave it at that!

Oh, what’s this? The guys have written a song about me? Nah, I’m not that fucking special, well not that kind of special anyway. Jim B starts more like a rock song, and I hear a Mr Whippy sample in the background. Fuck, wait, that’s actually Mr Whippy driving down the street and I just missed my opportunity. Can someone please tell these guys that they now owe me a double choc dip with a flake. Back to the track, yeah, it’s a good one. Probably the most commercially friendly track so far, which is probably why it was the lead single. It also has something to do with having a drink. So, check it out on You Tube while you’re having a drink.

Misery comes straight out the gates with a slow and true blast beat and some call and reply vocals. There is possibly a second vocalist on this track, or just some clever editing to make it sound that way. The Whammy pedal makes an appearance again throughout the bridges, and the choruses slow us down monetarily before throwing us back into the ferocity of the verses. A strange interlude section includes some desperate sounding spoken word overdubs that reminds me of that Daddy song from the blokes on the Kob.

Does anyone know wtf Slonski Wurszt means because Google Translate isn’t coughing up the goods. Anyhow, we’ve just heard the “Death” element of the band, as well as some weird background clunks and bangs. I’m sure this song has a purpose, but I struggle to find it until the song pauses and then recommences with a heavy rolling riff and some Polish vocals that I’m fucked if I can make sense of. Even though I can’t understand a single fucking word they are saying, I’ll let ‘em have this one though because the music fucking bangs!

Two tracks to go and the next one up, Prophecy reminds me very much of a band with a song and album of the same name, and that’s all I really need to say about this track. The final track Gutter could almost be thrown into the same basket, or least a related project/s of the previously suggested band.

I’m going to suggest here that the band just leaves their genre at Groove Metal and ditch the “Death” part because it thankfully doesn’t ever really get there. If you’re into the heavier side of Nu-Metal and the resultant Groove Metal that was created at the death of Nu-Metal, I’d suggest giving this band a listen. They fill the void which has been flooded by
everything core for the past 15 or so years.

This one’s going in my playlist, and I highly suggest you add it to yours!