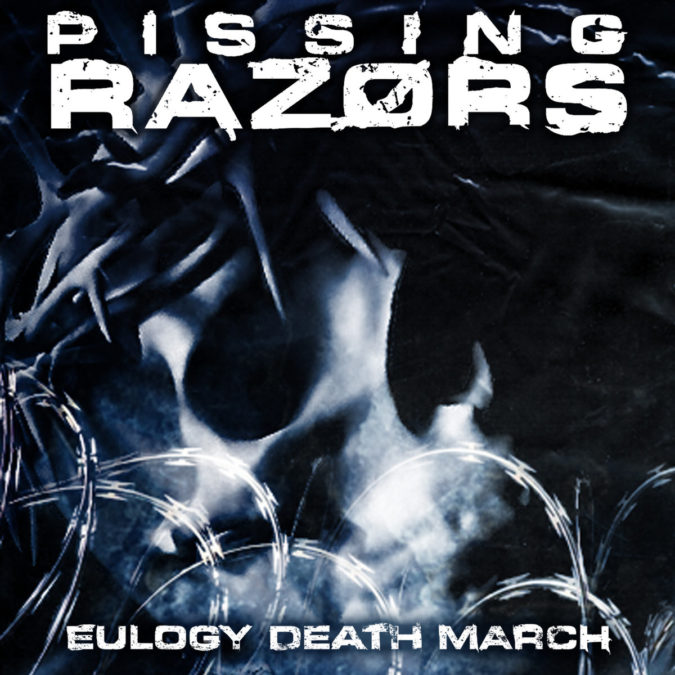 Pissing Razors, what a name! I think I already like these guys without even hearing their tunes. Let’s hope they don’t disappoint, and that the music is as brutal as the band name.

Apparently, they are groove metal from Texas which is another two reasons to like this band without even listening, but I guess I’m going to have to give it a crack if I’m going to do this review any justice.

Some quick triplet jabs over a blast beat set us on our way into In Spite of My Scars. This track features some bloke named Dave Linsk from a band called Overkill that you may or may not have heard of. It’s a heavy groovy track and the dual vocal attack gives it an interesting call response type feeling throughout the verses and choruses. Nice little opener!

Unsee kicks off with a randomly sporadic, offset timed riff.

When it kicks in, it makes sense, a whole heap of heavy sense. The use of silent pauses throughout the track help to feed the intensity each time the main riff kicks back in. I think they turned the bass guitar up in this one too, either that or they just dialled in one hall of a killer tone.

Holy shit, I just realised that this is a 14-track album. I think I might need to attack this a couple of songs at a time, otherwise I might lose all of your limited attentions. Hell, I’ll probably even lose mine. So, Chemical Burn is up next and after a quick tribal sounding intro it kicks into a thrash section before pulling back into a slower groove with some killer
big slow guitar bends holding it together. Then we hit a bounce in what I think is the chorus, the kind of bounce that I wish we’d hear more in the modern heavier genres.

This next one comes in two parts, the first part being a 1-minute intro which really doesn’t seem to serve any purpose. Part 2, being the actual song titled Result of Virtue starts with a not so brutal intro and then jumps into a very brutal chugging guitar progression. Vocalist Eddy Garcia seems to be channelling Burton C. Bell on this track, and even the band itself delivers a very Fear Factory sounding track. Not bad, not bad at all.

I really hate it when bands use weird timings, and not because it doesn’t sound good, but just because I couldn’t be fucked trying to count so I can get into the groove. Luckily for me, though, this one quickly picks up the groove over some simpler 4/4 timing. Well, kind of, it loses me again after an absolutely grooving chorus. Great song if you can figure it out.

It’s time for the title track Eulogy Death Match, and it’s nothing like I expected, with its strange little tom fill intro and out of time guitar chugs. Seems to be the formula here, fuck you up with the intro and then smash ya with some groove. I’m not gonna lie, I’m digging the shit out of this. At least until they lose me again with some strange time signatures.

Anyone up for teaching me how to count?

Left for Dead, is exactly how I’m feeling right now because that last track lost me somewhere in the abyss of having to count past 4. Anyway, this one’s a bit simpler and more of a heavy rocker. It pulls back just at the right time for a quick couple of chugs in each pre-chorus before it throws us into a heavy singalong style chorus. Absolute belter of a track
with a token guitar solo in the outro.

Pulverised keeps up the rocking pace with a simple 4 to the floor drum rhythm and chugged out guitars. Throw in the odd guitar solo or two, and you’ve got yourself in the Crushing Grip of a classic thrasher. And that’s the name of the following track, Crushing Grip. And yeah, it’s got one with its crushing guitars, solid double kicks and angsty vocals. The bass guitar even gets a bit of airtime in this one as it blasts away with its distorted sound all by its lonesome.

Another guest vocalist jumps onboard for the next track. That vocalist being Steev Esquivel of Skinlab fame. The songs main riff sounds an awful lot like the bridge into the solo in an old and quite famous Sepultura song that everyone always calls the wrong name, and a fair bit like another one from the first Soulfly album. This isn’t a bad thing, though, it’s just a noteable mention amongst some heavy metal royalty.

Nothing to Say, well not much, which is very unlike me. This tracks’ pretty fucking heavy though, probably the heaviest so far. Not so fast or technical, just solid and heavy with a nice little bounce through the verses which breaks up the hard slams and chugs that carry on throughout the track. The next track Sharpened Wood fairly well follows suit but rests a little more on the groove element of the band. I’m really impressed with the mid 90s to mid 00s sound that the band delivers flawlessly. Takes me back to a good time in metal!

Ok, here it is, the final track Die for the Crown. It’s heavy, it’s groovy, and by this point it’s exactly what you’d expect from this Groove Metal powerhouse. Thrashy where it needs to be, and full of groove everywhere else. Well played gents, well played!

Fuck Yeah, that was a pleasant experience. Get it into ya!