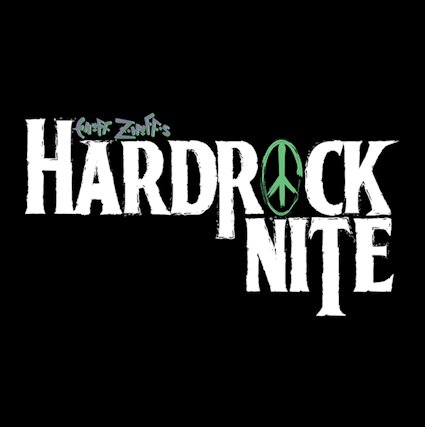 This is probably going to get me crucified straight up, but I am not, will never be, and more to the point am not a fan in any way, shape, or form of the band who allegedly gave birth to rock and roll, The Beatles.

I find their music dull, uninspiring and at most times utterly pointless, much to the disappointment of many people I have had to share a tour van with.

So, when I sat down to review Enuff Z’Nuff’s Hardrock Nite, a covers album of some of the band’s favorite Beatles songs as well as songs from Beatles’ members solo careers, it was only out of respect to Enuff Z’Nuff, who I had the pleasure of looking after last time they were in Australia.

In fact, the intro to the album reminded me precisely of that tour, with the circus big top theme exploding happily to life, before chaos reigns and the electric instruments of one of the finest exponents of power pop hard rock in the world kick their high boots in the air to commence Magical Mystery Tour.

It is evident from the outset that Enuff Z’Nuff are not merely trying to replicate or pay simple homage to The Beatles. Yes, the degree of musical respect is obvious by the fact they decided to cover 10 of The Beatles songs, but in typical Enuff Z’Nuff fashion the rulebook has been thrown out the window and the new Principal is Chip Z’Nuff.

This man is a musical enigma. Larger than life with a debauched rock and roll life style following in his wake, Chip is a true gentleman and talented as fuck vocalist and bass player.

But he isn’t on his own. Guitarist Tory Stoffregen is a brilliant player and awesome human being, while drummer Daniel Hill is the smiling assassin of the group but also the glue holding them together with an astute and flowing drumming style that makes it look effortless.

Although I don’t know guitarist Tony Fennell, he has to be a gun just for the fact Enuff Z’Nuff have him playing in the band and even at this early stage you can hear he has the right chops for the job.

Cold Turkey kicks in next with a twin guitar assault creating a life of their own, punctuating proceedings with precision and fire.

I don’t know this song but I’m pretty sure the original sounds nothing like this. You can almost see the large frame of Chip caressing the mic stand as he purrs into the microphone, oversized glasses covering half his face while he slaps away at the neon green bass strings creating a magical maelstrom of music that is as accessible to your parents as it is to your children.

The guitar solo that leads the second half of the song is awesome and carries Cold Turkey almost to the end in a swaggering display of timeless hard rock excellence that translates into the next song, Eleanor Rigby.

This song I know, having been covered by many people over time, but none better than my best mate Pep Rogers, who made this song his bitch.

Until Chip decided to cover it.

This version of the song strays less from the original than the opening tracks but well placed guitar licks and solos add an extra element to elevate it above and beyond.

What’s this? They have stuck in a cover of Live And Let Die by Guns N Roses?

I didn’t know the four insects did this originally, but obviously they did.

With a more electric intro that soon succumbs to the familiar stripped back opening verse, Enuff Z’Nuff keep this pretty straight – until the guitars kick in and Hill decides this song deserves a little more oomph.

Venturing awfully close into reggae territory on occasions, this version is a true musical journey through the genres. It ebbs, it flows, it rocks the fuck out, and it is also superbly delivered by Chip who sings within himself with dignity.

Everything turns to chaos towards the end when the guitars decide to go to war against each other and I’m still not sure who won but it must have been close.

Dear Prudence swirls to life in an almost dreamy state of distorted guitars, creating a trance like atmosphere that would almost take you down the rabbit hole with the right hallucinogens.

Fuzzy guitars abound and by the time the vocals kick in I realise I do know this one. Turns out I know more about insects than I thought.

This one (from my memory) is pretty faithful to the original, with Chips vocals not too dissimilar to the way I remember hearing it when my musical nemesis Larry Attard forced it down my ears somewhere between Coffs Harbor and Byron Bay. I think he would like this version too.

Helter Skelter, the song made famous by a particular deranged lunatic, fires into action, guitars blazing, high hats tumbling in a restrained yet eclectic – does that even make sense – rendition that is beautifully guitar dominated.

The poetic license taken by Enuff Z’Nuff on most of these tracks is refreshing to see.

As far as I am concerned if you are going to cover another bands music on an album the least you could do is show them the respect of adding your own feel to them.

For better or for worse.

And I’m pretty sure if the Fab 4 heard any of the songs on this album they would come out of their yellow submarine for long enough to share a cup of tea and break some scones with Chip and the boys.

The backing vocals – not just on this song, but throughout – are also flawless, adding a clarity and layer to the songs.

In fact, everything about Hardrock Nite so far has been well-thought-out and crafted, lifting the songs from the hands of their creators and onto a different plain that they were possibly never intended to reach.

JET takes off with just enough of the original version seeping through the cracks that it doesn’t take long for me to recognize.

Another song I had no idea was sung by The Beatles or one of their members.

But would I have liked it if I had have known? Probably not.

This track stays on course until about the midway point, where Tory and Tony have obviously had enough of sticking to formula and board their own flight to paradise.

I think I have already said it but I’m nothing if not repetitive.

For mine the guitars are the defining point of this entire album. They are subtle when needed and explosive when not, creating a different – I didn’t say improved, even though I thought it – version of the songs that typifies the love and respect Enuff Z’Nuff have for The Beatles and their music.

Fuck, I just remembered I have to interview Chip tomorrow so lets hope he doesn’t read this before we chat because that guy is a massive fan of The Beatles and is much tougher than me…

Revolution kicks off, awash with guitars, before a scream interrupts proceedings, giving way to an up-tempo version of one of the songs I actually will admit to liking.

Chip owns this shit by now and is clearly enjoying the chance to record a lasting tribute to a band that has obviously shaped his life and career in ways many of us will probably never comprehend.

More guitars storm the castle, fighting for supremacy, before Chip brushes them back into line, potentially thwarting a…revolution.

Back In The USSR begins with a spaceship sound flashing across the landscape before the guitars kick in defiantly and bring things back to Earth.

Chip shows yet another strain of his vocal reach on this track, maintaining his own style and charisma while managing to emulate the talents of a band that recorded these songs well over half a century ago.

Not that I think The Beatles would ever have imagined their tracks would be getting this royal treatment, but something (probably Larry again) tells me they would be more than happy with the treatment afforded by Enuff Z’Nuff.

The changes are many and obvious but are never disrespectful which is an important component when recording someone else’s music.

With A Little Help From My Friends (I thought that was Joe Cocker, but if one thing this review has taught me is I know fuck all about The Beatles) brings the album to a close.

So far it is pretty much as I remember hearing from Mr. Cocker, but with a slightly bluesier edge and vocals that don’t smell of stale whisky.

It is the most laid-back track on Hardrock Nite and an interesting selection to sign off on, but it seems to work.

This album won’t convert me into a member of Beatle Mania but has definitely escalated my respect for the musicianship of the whole of Enuff Z’Nuff.

It should stand as a lasting monument to a band that, and yes, I will begrudgingly admit, MAY have left an indelible mark on the music world at large.

And if not, it will live on as an outstanding body of work in its own right by a band that continue to surprise and impress in a world where surprises are few and far between.