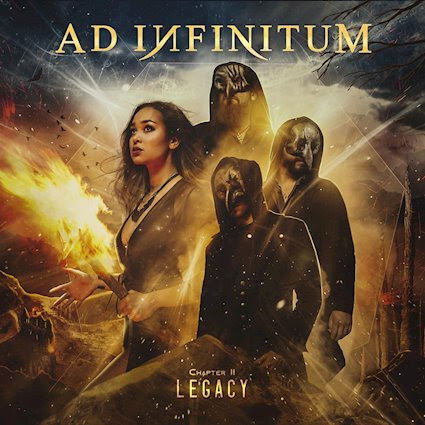 Female fronted Symphonic Metal, not sure how I fell about this, but it sounds interesting. In defence of the band and their promo team, though, they did not claim to be “female fronted” in any of their promo material. This is a step in the right direction with this reviewer, as like many others and punters included, I’m quite sick of that being used as a genre or selling point and some kind of bonus program for additional credit and attention.

The promo team on this one just called it a Symphonic Onslaught. Let’s see if I can survive this one then, shall we!

The album kicks off with, well, some symphonic stuff to introduce the opening track Reinvented. Who’d have thought, hey? Harmonic guitars enter and shorty after we hear frontwoman Melissa Bonny creep in seamlessly with some super clean, super melodic vocals. This chick can certainly sing, and she also throws in some nasty little evil sounding undertones which are just enough to make you listen a little harder. Constant strings and synths fill the background of the track as it rocks along with traditional sounding metal riffs.

Unstoppable fairly well follows the formula of the opening track, and I take some time to read the album promo a little further. I’m intrigued to discover that the band does not have a keyboard or synth player and is a basic 4 piece with vocals, guitar, bass and drums. For a four piece, the band have created a massive soundscape with this recording and this track hear guitarist Adrian Thessenvitz show off his lead guitar skills mid-track. Just a guess, but I reckon the whole live set must be played to along to a click with programmed synths and soundscapes. And while I’d really like to see the keys and samples performed by a keyboard player or sampler, I’ve got to admit that it takes some serious talent to pull it all together in a live arena.

I’m now halfway through the next track, Inferno, and it hasn’t really stood out to me until a ripping super-fast guitar lead pokes its head out to snatch my attention back. Then the chorus really grabs me, and I’m thinking I should probably rewind a little and give it a listen.

Ain’t nobody got time for that though …

A short burst of djent kicks off Your Enemy before the song pulls back to a more subtle groove and the guitars make room for the drums, bass and synths. When we hit the chorus the djent riffs rears its ugly head again, and rather than return to a verse, the song continues to build and get heavier. We then hear some killer heavy screams which are a nice
change from the otherwise cathartic melodic vocals which have filled the album so far.

Catchy tune, bit of a banger!

Next up is a track featuring Nils Molin titled Afterlife. I have no idea who that is but google tells me something about Swedish metal, and a couple of bands called Dynazty and Amaranthe who I’ve also never heard of. Anyway, the song sounds a little bit darker and epic than everything so far and the shared vocal duties and resultant mix of female and
male vocals give it a touch of extra spice.

Breathe commences with a vocal melody backed by strings and synths. It’s a slower one this one, and it sounds very ethereal. Some tasty guitar lead work bridges the first couple of verses, or maybe the chorus, or who knows really, these songs don’t tend to follow your standard song structures. It’s all very progressive, and well, symphonic.

By this point, I’m honestly hoping that some of the strings and synths would piss off for a minute so that I could hear the band. Luckily, synths full blast still and all that shit, Animals actually has a few good riffs, that stand alone just enough to give the track some long-awaited chunk and groove. Oh, and there is some piano’s floating around at the end there.

Into the Night takes off with a lot more pace than anything leading up to this point, and the first vocals we hear are those nasty screams. This doesn’t last long before the melodic vocals take over again, but this time around, we hear a little more grit and intensity to them as the song hits a rocking chorus. Not a bad track to be 100% honest, and a well-needed step away from the formula of the rest of the album so far.

Surprise, strings and synth is where the next track Son of Wallachia rises from. It pretty well continues the vibe and format of the earlier tracks. Not bad, but not great either. This chorus is quite catchy though if you’re into big drawn-out melodies.

In an interesting turn of events, My Justice, Your Pain gets its groove on with a quick drum blast and some distorted clean lyrics. We even get to hear a bit of a riff after that as the band takes the forefront with very little synth and keys anywhere to be heard. They are there though, but just subtly in the background and not flooding the entire mix as
prominently as they are throughout the rest of the album. We even get to hear those screams again a few times, which add some much-needed brutality. Probably my favourite track so far, as it focuses more on rocking than it does on creating symphonic atmosphere.

Only two tracks to go, and Haunted brings on probably the heaviest riffing so far. Those pesky synths make an appearance again too, but almost get lost under multiple layers of guitars. It’s a heavy track with melodic vocals, but we do hear some screams again through the bridge of the track. That is of course until the melodic vocals return sounding sweeter than ever. Big track!

Synth, more synth and then some more synth. I wouldn’t call this my kind of Lullaby, but that’s what the band is calling this one. Nice groove throughout with its syncopated guitar stabs. The pre-choruses bring out the screams again, and there’s also some pretty amazing vocal melodies happening throughout the verses and choruses. Oh, and that breakdown, holy shit, I didn’t think they had it in them, but they sure do. That was actually great.

Well, it’s not too often you enjoy the second half of an album more than the first, but that’s exactly what just happened here. If you’re into Symphonic metal, you’ll probably enjoy the first half more because there is a literal butt tonne of synth smothering everything. Maybe a little too much for old school riffaholics like myself, which is probably why I enjoyed the latter half more because you actually start to hear a shift in focus to the actual band.

All in all, bloody solid effort!