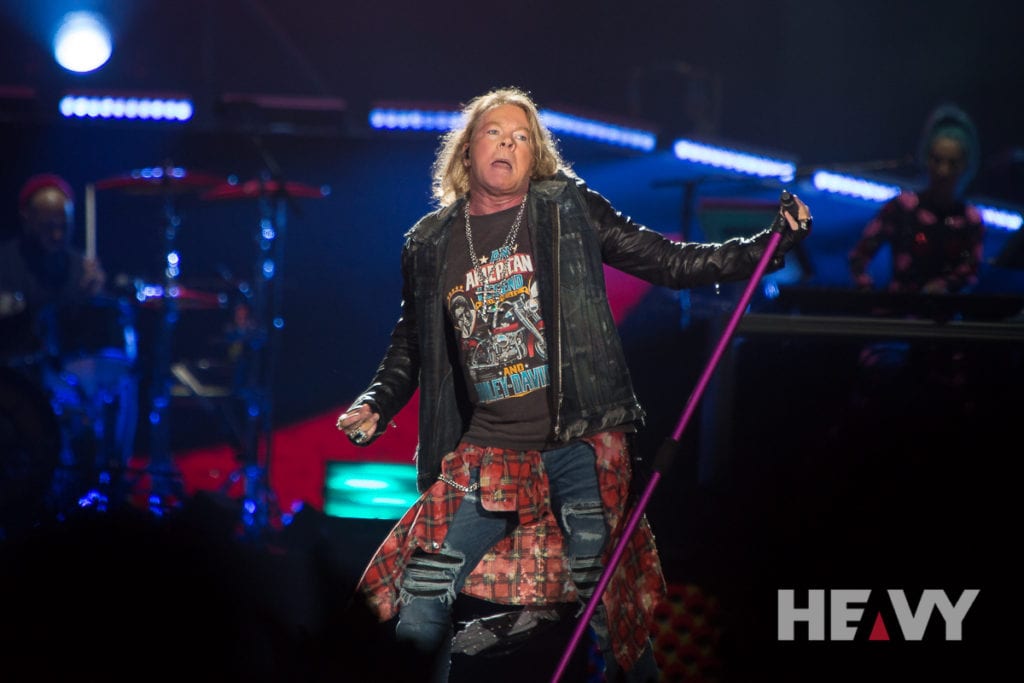 iPhone Video of the epic “Paradise City” show finale. Wait for the confetti and pyro!

Twelve months ago if you’ve said that Guns N’ Roses would be touring Australia in 2017, I would have called you crazy. According to all reports, the band was disarray, and it seemed like they were down and dusted… well as far as them ever appearing as Duff, Slash and Axl again.

Flash-forward to Feb 14th 2017 and there we were on the hallowed turf of the MCG waiting to see whether my memories of 1993 would be re-kindled… bar of course the lack of water, the dust bowl known as Calder Park and the 40 degree temperature that at times had my teenage self wondering if I was ever going to make it home alive.

Gunners’ frosty relationship with Melbourne fans appeared to take another blow early on this time around. Not only were the band nearly an hour late hitting the stage (a shame seeing Wolfmother whipped the audience into a frenzy early) but their announcer then referred to Melbourne as “Sydney” which led to a chorus of 80,000, “Boooos”.

Slash took to Twitter to apologise for the wrong city announcement:

Melbourne, thank you for an awesome fucking evening! Apologies for the Spinal Tap intro! But, we had a great fucking time tonight! Cheers!

Goodnight Melton! There will be no encore! pic.twitter.com/cqIlWHV8cN

After that little faux pas the only way the band could go was up… and up they sure did with not only a show that will be long remembered by the bands’ legions of fans but also served as a reminder to just how dominate the band still are in the industry… not many modern day acts could attract an 80,000+ crowd at the MCG.

Early on the crowd had been entertained by an energetic Wolfmother that seemed keen on reminding the audiences that not only were they still around… but also still recording music. Their brand of high-energy psychedelic rock certainly got the crowd going. Hits like Woman and The Joker And The Thief reminded us all just how great this Aussie rock act is and I found myself promising myself to look for their new material.

Sadly though the hour-long break between Wolfmother and Guns N’ Roses meant the crowd had mellowed again before Axle, Duff, Slash and co took to the stage. When they did they opened with a surprise – It’s So Easy rather than one of their big hits. It did seem a while for Axl to warm his vocals up but by the time he had the crowd singing along with Mr Brownstone he was well and truly in full flight.

From there on the band did nothing wrong. An amped up version of Chinese Democracy which was enhanced by the amazing visuals behind the band very quickly won me over… a surprise as it wasn’t a track I’d ever really loved previously and the whole ‘G erupted as Slash begun the very, very familiar strains of Welcome To The Jungle.

The loyal fans kept the energy going all night even though the band strayed from its stable of hits from time to time and dusted off tracks like Double Talkin’ Jive, Better, Estranged, Rocket Queen and This I Love, etc. The army of black stepped it up to another notch though during the hits. Live And Let Die, You Could Be Mine, and Sweet Child Of Mine saw the crowd louder than a Grand Final, but that was nothing to the way they reacted to Angus Young taking the stage and helping out with AC/DC covers – Whole Lotta Rosie and Riff Raff. As Young did his trademark waltz across the stage guitar in hand, passing Rose and Slash as he did so you feel that rock history was being made right there and then.

Perhaps the biggest thing to take away from this night is the showmanship of Gunners. Fireworks, firing guns lighting up the Great Southern Stand and an amazing array of video clips playing behind the band (including the amazing pornographic skeletons) just added even more to the night without ever distracting the audience from the music at hand. All of that came together with Axl Rose’s amazing piano skills as the band delivered the highlight of the night – an amazing rendition of November Rain that is going to stay with me for a long time come. For those that say that Gunners is Slash’s band – this just showed that as a team Slash and Rose are unbeatable.

Having said that though there were times during the night when the band used Slash as a great distraction while Rose went for another wardrobe change. Whether he was delivering a magnificent flamenco guitar piece or covering Pink Floyd’s Wish You Were Here with Richard Fortus Slash put on a master-class in guitar-playing for the entire audience and reminded everybody that he is still the best guitarist in the world.

When Guns N’ Roses launched in a full-on version of Nightrain, we knew that sadly the night was drawing to a close. To go out on a high though the band left the Melbourne audience with an encore of Don’t Cry (again the visuals behind the band only added to the atmosphere) and Paradise City.

Throughout the concert, we were reminded of how many great musicians we have lost over the last couple of years. The small symbol as a tribute to Prince on Duff’s bass-guitar all night served as a constant reminder that Prince alongside Lou Reed and David Bowie are now gone. Seeing a concert like last night also reminded me what a great band Guns N’ Roses are. Axl Rose again showed that he is a brilliant showman and still has an amazingly strong voice while Slash did what Slash did best… made us all wish we could play the guitar like him. Twelve months ago music experts had Guns N’ Roses dead and buried; last night showed us they still could have many more years to come.

iPhone photos from the front-row: