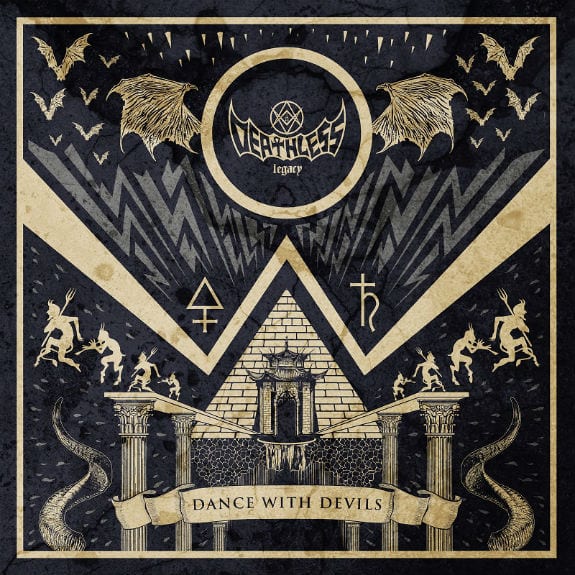 In Italy, back in 2006, five friends who loved Italian metal band Death SS formed a tribute band to them called Deathless. After seven years of this, they decided to begin writing their own music. Deathless became Deathless Legacy. The next year, the band released their debut album, Rise From The Grave, and two years later released the follow-up, The Gathering. Now, less than twelve months later, comes album number three from the hard-working rockers, Dance With Devils.

The album begins with the title track, Dance With Devils, a two minute long instrumental and haunting intro. It sets the scene (so to speak) for what’s to come on this horror metal record. With track titles like Headless Horseman, Devilborn and Lucifer, the album tells the tale of the macabre, black magic rituals, and gives a voice to witches who, over the centuries, have been mistreated, humiliated and even burned to death.

Join The Sabbath is the first official track on the album and, at over six minutes long, is also the longest. In this song more than any other, front-woman Steva La Cinghiala’s Italian accent is at it’s strongest, but it adds something to the track which is slightly reminiscent of Nightwish with its soaring guitars and haunting, powerful female leads.

For me, the standout track is definitely Lucifer which comes at about the halfway mark of the album. With its symphonic/power metal music and hard rocks vocals, this track shows how great a song this band can write because, ultimately, the rest of the album doesn’t really stand out and kind of blends into each other.

Horror music is certainly nothing new, with bands like Gwar, Wednesday 13 and Deathstars doing it for years and, while this is a solid album by Deathless Legacy that does show promise, it’s certainly nothing new. You can’t help but feel something is lacking. It’s a good album that has the potential to be great but doesn’t quite get there.