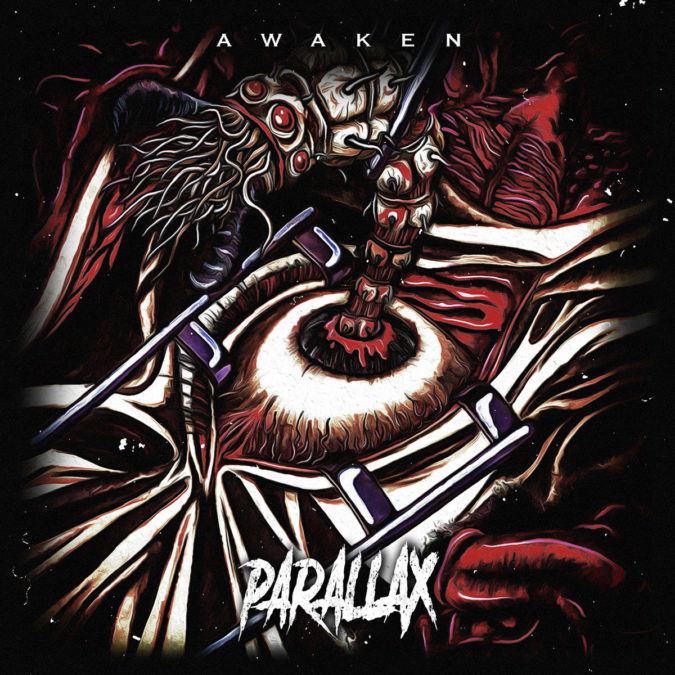 Huh, what? 5 seconds into the opening title track, Awaken, and I’m already confused. What the actual fuck have I gotten myself into? Jazz metal, is that what is going on here? Who knows, but it gets pretty damn brutal, pretty damn quickly!

Chug-chug, scream-scream … fuck yeah! Enough said about that one!

Descent? Well, this track does drop the tone and pace down a bit. Chunky and groovy would best describe it, but the band describes themselves as “a distinctive mash-up of chaotic yet atmospheric Groove, Hardcore, Tech, Death, Alternative & Nu-Metal” and I think I’ve heard all of these elements already in these first two tracks.

I’m really interested to see where this journey takes me, as the album is a concept album based on a “character that finds himself infected with a demonic parasite that brings about the destruction of planet earth”.

Track 3, Sleep, delivers the band’s distinctive mash-up and this time around we hear one of the band members take on some clean vocal duties. Not their heaviest track so far, but one of the more interesting ones which delves into the Nu-Metal genre. Sorry metal elitists, but they do it, and they do it quite well, so you can take yourself off to the basement now and put on some shitty underground European metal if you can’t handle it.

Nothing quite like a piano interlude mid metal album, or not, but that’s exactly what Solstice is. Not sure why, but I’m guessing it’s something to do with the concept. Interesting piece, but the kind of thing you usually hear at the end of an album or somewhere in the middle as some kind of intermission of sorts, and as track 4 on an 8-track album, I guess that’s exactly what it is.

Blood Moon comes straight back in with the heavy! Very cool use of offset timing between the drums and guitars through this track, with the heavy vocals keeping it all in order. This is one of those weird tracks where you just need to follow the snare to know exactly where to bang your head. Parallax pull it off well, though, without leaving you too confused. They even bless us with some more clean vocals and a guitar solo to bring us to a heavy ending of
the song. Great mix of genres and styles in this track!

Here I am thinking that the next track Hands is a bit simplistic with its chug along guitar riff, but then some weird timing shift happens, and the whole thing gets a bit weird. The timing and tempo continue to shift in and out throughout the song with the only defining and consistent factor being the heavy vocals, but then we hear a gremlin of some kind which I’m guessing is our concept character being infected by the demonic parasite. WTF is a demonic
parasite anyway, has the devil claimed the filthy Rona?

I didn’t realise I was listening to these tracks on vinyl, but the intro to Symbolic had me fooled into thinking I was, with that annoying hiss and crackle that the vinyl hipsters’ lose skin over. This is nothing more than an atmospheric track with no real musical content.

Possibly unnecessary, but again I’m guessing it’s all part of the concept story, so I’ll let ‘em have it.

Thankfully, closing track Esoteric blesses us with an actual song, and it’s not a bad one. Probably their most simplistic track so far, with basic chord progressions and the odd chug here or there. The second half of the track takes us back to the jazz metal feeling that the opening track delivered with its shifting and sporadic riffing. The song does end on a more simplistic heavy rhythm section with great chugs and some sharp, aggressive vocals.

It took me the whole album to realise that I probably should have read some lyrics so that I could understand the concept of the album. I’m sure there is a great story in there somewhere that actually enables you to make sense of the album because it does come across a little confusing, random and disjointed. I wouldn’t mind hearing a full album of
actual songs by this band, and I may even have a look into their back catalogue.

Probably not though, because I try not to live in the past, and I’m guessing these guys are more of a fan of the future with their interesting bland of genres and their non-generic, non-elitist style!