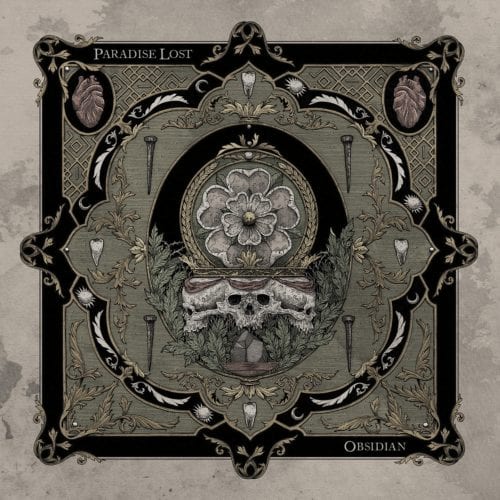 Even though Paradise Lost have been around for over thirty years now, Obsidian sees the band heavier, angrier but yet more melancholic than ever; more mature if that could even be possible.

Paradise Lost were one of the first bands that PROPERLY melded Death Metal and Doom Metal music together. Even though Paradise Lost have been around for over thirty years now, Obsidian sees the band heavier, angrier and more melancholic than ever. More sophisticated, if that could even be possible.

Like most doom/goth metal bands from the late eighties and early nineties, their early meanderings were built solidly upon the death metal foundations. But, as it would seem, the members of Paradise Lost have been seemingly looking for something more meaningful. A more profound creation of music that actually asks the listener to let themselves submit to their emotions and feel OK about not feeling OK.

Type O Negative, My Dying Bride, Katatonia, Agalloch and so many other great artists found an emotional release and purpose because of Paradise Lost’s genesis.

Now, four of the five original members of Paradise Lost – Nick (vocals), Greg and Aaron (guitars), Stephen (Bass) and Waltteri (drums – 2016 – current) have created a soundtrack for our angst that proceeds all else.

Obsidian, like its title reflects, is the sum of a stellar and meaningful career.

One need not listen to anything other than the magnificence of Gothic (1991), or Shades Of God (1992), Icon and the amazing Draconian Times (1993 & 1995 respectively) to get an understanding vulnerability through music.

The opening song, “Darker Thoughts” is Nick Holmes personally placing his hand upon my shoulder with a silent whisper of “everything’s gonna be OK!” The opening dialogue to the track is a lone acoustic guitar accompanying Nick telling his devotees “Drifting through loss we escape from the cost of the pain. The healing through years so obscured by the tears and the strain. But this one-way street you’re on, you’ll never be fulfilled! And this one-way street you’re on is gonna get ya killed!…”

Shortly thereafter a small chamber like orchestra backs Holmes on his intro then at around about the two-minute mark, Paradise Lost kicks in with their familiar sound to amplify and validate our angst.

“Fall From Grace” is nothing but classic Paradise Lost. That slow deep guitar-driven groove with a script both solemnly growled and harmoniously sung.

Track three “Ghosts” is for those of you who were part of the goth club scene in the nineties. It is a homage to Paradise Lost’s heavy bleakness, fading out so beautifully and leads into “The Devil Embraced”. Here is the track that if it is at all feasible, the album hits a definite sense of intent disguised as magnificent malevolence. “The Devil Embraced” is one of the standout songs on the record for me as it is full of all that PL represents as discussed, reviewed and broken down above.

Even though Paradise Lost as an entity have been around for over thirty years now, Obsidian absolutely sees the band heavier, angrier and more melancholic than ever; more mature if that could even be possible?

Even though Paradise Lost have been around for over thirty years now, Obsidian sees the band heavier, angrier but yet more melancholic than ever; more mature if that could even be possible. For absolute clarity of this posed question, check out the closing song of the album “Ravenghast”.