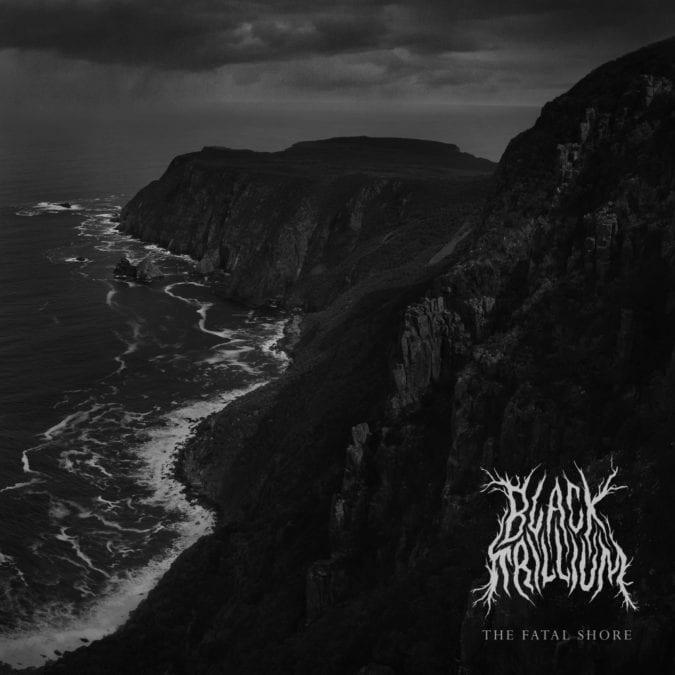 The purpose and intent of doom metal is to be enduring and not to give the listener a quick fix. The full picture is extended foreplay, unveiled agonisingly over time, through broad and succinct musical strokes. Although The Fatal Shore is a debut release, Black Trillium appears to have enunciated themselves exceptionally well.

Invoking the essence of many influences, Sydney Doom outfit, Black Trillium have released their debut album The Fatal Shore. A five-track offering that sees a well crafted and surprisingly robust collection of songs that brings to life the union of solemnity and brutality.

The album’s opener titled “Conviction” blissfully awakens our senses with intrigue as a lone guitar strums a grief addled riff, not at all dissimilar to the monotonous agony heard on “The Angel And The Dark River”. Both of which the deep guttural vocals akin to early Aaron Stainthorp of My Dying Bride and Renato Gallina from Australia’s own dISEMBOWELMENT.

A haunting serenade as a welcome to The Fatal Shore’s gives us clean vocals w- a genre-redefining dichotomy of MDB interbred with Alice In Chains. It may sound strangely bizarre to comprehend as it was equally odd to type that phrase, but what Black Trillium have offered here for us seems to work.

Track two “Banished” is a hypnotic deep thumping groove beast where death growls and clean vocals battle for dominance. A haunting, jarring tune interspersed with quiet melodic moments of serenity in between the groove. A beautiful violin melody at the end is courtesy of Tim Charles of Ne Obliviscaris. It gives the song a schizophrenic twist of madness.

The introduction to “Diseased” teases a hint of shoegaze crossed with black metal leanings before succumbing to the familiar groove that Black Trillium obviously feel comfortable with. “Diseased” ebbs and flows with a monotony that is only genuinely acceptable within doom while little disjointing nuances attempt to drive the song off track.

Truth be told I feel there is an undisclosed purpose of the album, briefly hinted within the press release and alluding to its title. The two members of Black Trillium, Zach Carlsson and Simon Skipper wrote the album whilst travelling around the country and visiting iconic locations. This journey inspired the album’s title – The Fatal Shore.

Opening with a lone harmonica and replaced by an acoustic guitar is soon beaten to a pulp by the familiar slow, repetitive growls and clean vocals heard on the previous three songs. “The Fatal Shore” lacks the real punch I was left longing for. Without being harsh, at this late a point in the album, I could predict what was coming next in terms of song structure and content. But, the final track on the album, “Haunted Oceans”, I would have to say is the standout song. It is the most diverse song and encapsulates what I feel is the real feeling that Black Trillium are working to convey as an entity. It has the deep foreboding emotional grip that I was anticipating throughout the entire piece. The quiet, subtle vocals gave me chills which were magnificently backed by pulsing discordant musical emotion.

The purpose and intent of Doom Metal is to be enduring and not to give the listener a quick fix. The full picture is extended foreplay, unveiled agonisingly over time, through broad and succinct musical strokes. Although The Fatal Shore is a debut release, Black Trillium appears to have enunciated themselves exceptionally well.

Although I don’t see Black Trillium as a stand out with this debut, I do believe that their sophomore album will define their sound and identity. Until such time The Fatal Shore is definitely a grandiose place to start, and Black Trillium should be commended on what they have achieved thus far.