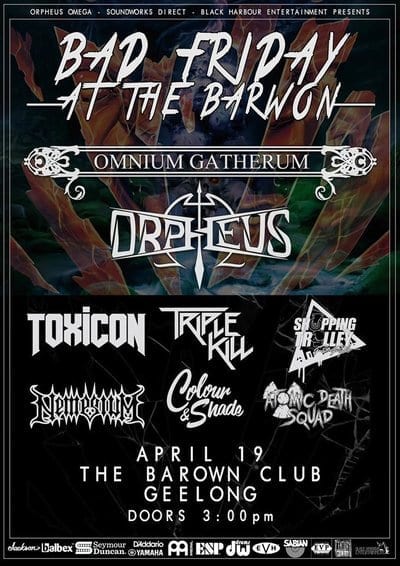 There’s always a special little tingling feeling in the marrow of metal fans when who live outside of the burbs and big cities and a big international band comes to play in their hometown and even better when it’s at the venue which is many a metalheads local drinking establishment.

So…what better way to be sacrilegious on Good Friday at The Barwon Club Geelong and eat and consume all of the evil beverages and prepare for an Easter Saturday hangover that even Jesus himself would rather wait an extra day for to recover properly? Well we wanted to spend it with a bunch of close mates and killer local metal bands and also one awesome band from Finland.

Unfortunately due to circumstances beyond my control I missed the two openers Atomic Death Squad and Colour & Shade. Sorry Lads. But I made it just in time to see G’town extreme band Nemesium who simply put were fucking awesome! Extreme death metal done brilliantly courtesy of years of practice, well honed finesse and attention to detail. Nemesium are advocates of the old school ways of writing and crafting their music but have seemingly mastered the ability to write extreme music that is relevant to the latter quarter of this century, hence why they have recently been signed, proof that what Nemesium deliver on disc is exactly what the audience bares witness to when they’re on stage. Their new album can not come quick enough.

Next to grace the small sticky Barwon Club stage were another batch of Geelong locals – Shopping Trolley Fist Fight. A combination of many genres but with a firm foot in the metalcore corner of a heavy metal dispute. They put on a show that was purely about making their audience move and be immersive in the feeling and emotion of the general metal collective. A united brother and sisterhood that has brought us all here together.

Following on Triple Kill are an energetic and fun heavy band that won’t take anything about being heavy metal seriously, aside from their music that is. And Triple Kill’s sound and formula is a little thrash metal, a little power metal and all tongue in cheek. A weird mix make no mistake, but Triple Kill’s formula on making music works. The crowd loved ‘em and where before them Shopping Trolley Fist Fight brought the crowd together, Triple Kill kept the audience held tightly together and in unison had the whole room moving. Their cover of Bonnie Tyler’s – “I Need A Hero” was awesome and vocalist Rodney’s voice was absolutely on point and nailed the song.

So where Triple Kill brought the crowd together and celebrate, Melbourne’s thrash metallers Toxicon ensured that those left standing close to the stage, near sore necks ready to propel up and down again with beers in hand, Toxicon shredded our faces off courtesy of their harsh thrash attack delivery. The night was back to being balls to the wall honest, heavy fucking metal and they were a perfect prelude to the final two bands.

Orpheus Omega. Little can honestly be said that hasn’t already about Orpheus? Having been around for many years now and have earnt our nations respect and kudos. Though their sound has been forged courtesy of the old school Gothenburg sound, Orpheus’ style and sound is clearly recognisable. One of the few Aussie bands that have a proper grasp on crafting proper melodeth, Chris, Joao, Nathan, Keswick and Matt put on a flawless, high profile performance to a small Geelong 100 person or so crowd as if they were playing to a stadium audience. Courtesy of their stellar live mix, they very well could of been. Frontman Chris (who also organised the Driven by Conflict And Sin tour with Omnium Gatherum) is a commanding and comfortable presence on stage every single member of Orpheus Omega performs their role of melodeth stardom perfectly and honestly.

And whilst Orpheus Omega, could be considered a hard act to follow, clearly up for the challenge were Finland’s Omnium Gatherum. The intimate and absolutely pumped Heavy metal loving Barwon Club attendees were ready to bare sonic brilliance from the Finn’s. This was their first time in Australia and Omnium Gatherum were going to make sure that it was a gig we weren’t going to forget. Like Orpheus before them, Omnium Gatherum walked, performed and commanded their stage, their music and their crowd as if it was a thousand capacity venue. Playing songs from their vast catalogue, Omium’s sound and style is deeply rooted in traditional European Melodic Death Metal. Thanks to the incredible front of house mix (many larger venues take note!) every single note, beat, and vocal was crystal clear and so satisfyingly complimentary of the sound and technicality of a band of Omnium’s stature they were all round a pleasure to hear and watch.

All up the Driven By Conflict And Sin Good Friday Extravaganza was an incredible way to spend the start to our Easter Long Weekend. Kudos goes to Chris Themelco for organising such a killer event and bringing all us varied yet unified metal heads together in one place.

CALIGULA’S HORSE Rise Above And Beyond Radiance