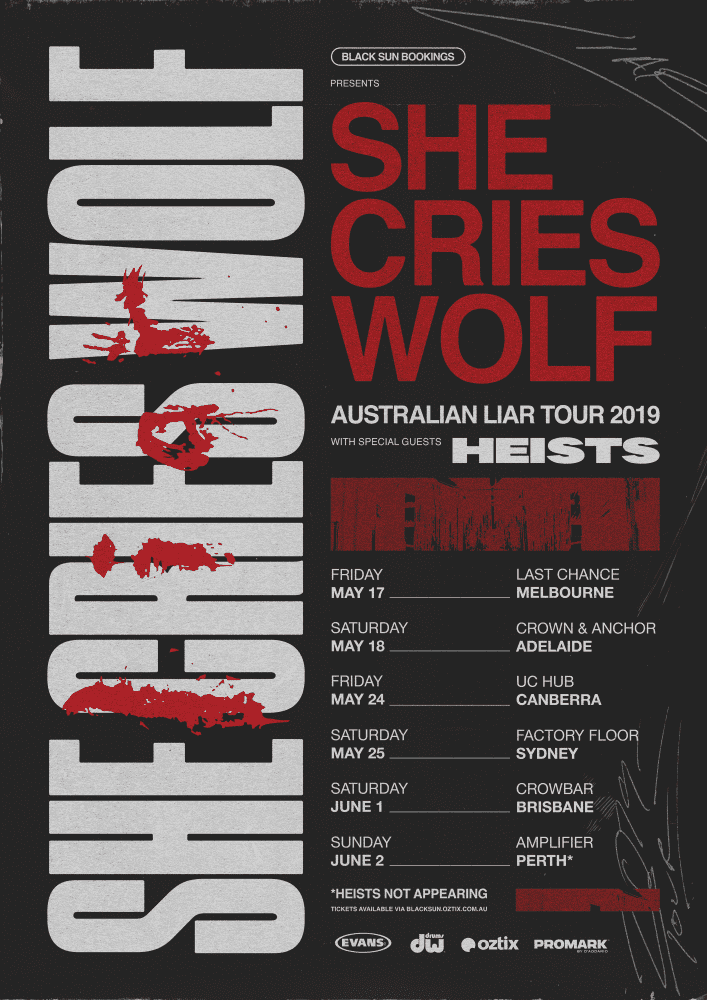 Brisbane’s melodic hardcore quartet She Cries Wolf took the Australian heavy music scene by surprise late in February with the surprise release of their third full-length Liar. Deep, dark and vicious, the album has received strong reviews, and the band are hitting the road for a string of shows around the country with some impressive supports. Tonight, we’re at the factory theatre in Sydney’s inner west to take in some of the finest up and coming bands in the local heavy scene.

Kicking it off this evening, Newcastle five-piece The Wandering. For a young band, their stage show was tight as. Heavy and aggressive, they didn’t hold back, unleashing their fury on the small but enthusiastic crowd. Hardcore pits were breaking out regularly throughout the set, with fists and roundhouse kicks flying everywhere, especially during singles ‘Old Wars’ and ‘Malignant’. Vocalist Jamie Yerbury was firing, delivering some first-rate ultra-low guttural growls. The rest of the band were on point as well, combining fast and slow sections with some brutally heavy breakdowns.

Following on from the savagery of The Wandering, Central Coast outfit Grim Indiana offered their brand of post-hardcore. There is a unique aspect of this band. While there is aggression in the music, there is a melancholic element that allows them to drift outside the boundaries of a typical hardcore band. Rather than remain on the stage, unconventional vocalist Elijah Smith delivered most of his uncompromisingly dark lyrics from the floor, getting up close and personal with the punters. You could hear both passion and frustration in his voice as he bared his soul while the rest of the band rumbled along behind him. Set highlights were ‘Defeatist’ and ‘Nazarene’, both great examples of how Grim Indiana delivers post-hardcore in a variety of different flavours.

Next up, it was Sydney melodic hardcore quartet Watchtowers. Fast and aggressive, with some heavy breakdowns, their music fits into the more conventional hardcore style. Many of their songs have the additional element of spoken word sections, giving the songs heartrending depth. Vocalist Jarrod is an authoritative frontman. A whirlwind of facial hair and tattoos, he delivers his lyrics with such passion and intensity that he takes everyone in the room on an emotional rollercoaster. He and the rest of the band gave a tight set, a destructive combination of bone-jarring tempo changes and unbridled aggression. The song ‘It All Ends The Same’ is a clear example of this, building from a slow beginning to an all-powerful finale. However, ‘Twenty Three’ was the compelling highlight, delivered with such power and emotion that it looked as though Jarrod was close to tears as he bared his soul through his lyrics.

Another Sydney band Heists kept the aggression rolling. These guys have only been around for a couple of years, but have supported the likes of Terror and Stick To Your Guns. They have built a reputation for delivering high energy live shows, and tonight was no exception. Opening with catchy ‘Outrage’, the crowd came to life with hardcore pits and screaming vocals. Many of their tracks are upbeat, with big choruses that encourage the audience to shout along. Vocalist Chris was holding out his mic to a screaming punter on several occasions throughout the set. New single ‘Defeated’ went over well, and ‘A Fractured House’ was the undisputed highlight, with its colossal breakdown shaking the foundations.

And finally, it was time to dive head first into fear and loathing with She Cries Wolf. Opening with Perjury from said album Liar, vocalist Luke screamed those poignant words “I tried to live as an honest man, but everyone fucking loves a liar”. This simple message set the tone for the show and sums up what this band is about. It is grim, sinister, and aggressive, and above all else, extremely honest.

The songs from new album Liar all sounded fantastic live. The band has managed to capture all of the fury of their live show during the recording process. After seeing the band perform live, it’s easy to appreciate the depth of the songs, both musically and lyrically. She Cries Wolf put a modern slant on the classic punk style. They play with tons of energy, but there’s also an abrasive, gritty feel. Tracks such as ‘Magdalene’, ‘Love Trader’, and ‘After Death’ all sounded explicitly consonant to the album recording. Although, it was an older song, ‘Baal’, that got my blood pumping. The harshness, the energy, the frantic opening, and tempo changes…and when Luke screamed “put down your rifle, run for your life”, I and many others in the room couldn’t help but thrust my fist in the air and SCREAM along with him.

The twin guitar assault from Kyal and Daniel worked exceptionally well, and underneath it all, the pummeling rhythms of drummer Luke Gallows are a rumbling avalanche of controlled aggression. Further to this, the integration of samples into their chaotic sound compliment the songs, never feeling out of place, nor are they too detracting from the songs themselves.

This gig will stick in my mind for some time. Tonight, She Cries Wolf showed their Sydney fans just how that have managed to carve out such a strong name for themselves within the Australian heavy music scene….by delivering blistering live shows.