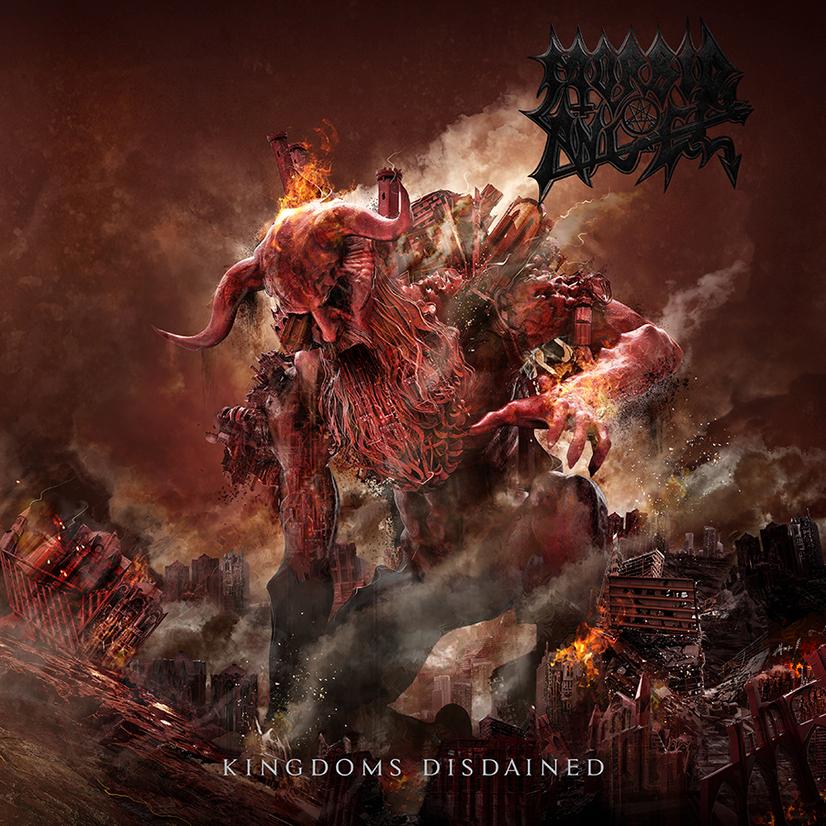 It’s been six long years for Morbid Angel since their ill-fated Illud Divinum Insanus, an album which has divided listeners since its release; and of which, undoubtedly, alienated a number of their older fans. Having passed “J” with their live album, Juvenilia, in 2015, one of the originators of Florida’s death metal scene has returned with their newest album, Kingdoms Disdained. Releasing this record so late in the year, one could be given to wonder, with a slight air of hesitation, whether this would be another misstep for the death metal titans? Sadly, it most certainly is not that. With David Vincent once more out of the fold, the band’s second long-time running vocalist/bassist, Steve Tucker has returned to take over vocal duties. This is Tucker’s first album with Morbid Angel since 2003’s Heretic, and Kingdoms Disdained find itself is as enraptured with chaotic passion and fury as some of the best of the band’s works, such as Gateways to Annihilation.

Kingdoms Disdained is not so much an album that is aiming to break the wheel or touch on broad new ground (that’s where some might argue Illud failed even), its purpose is to restore the bright name of Morbid Angel in the world of death metal. There has been a shadow cast over Morbid Angel’s name since the band released their “I” album, but it pleases me to say that Kingdoms Disdained is a fantastic step back in the right direction. Tucker’s vocals are full to brim with ugliness and venom, and the message behind the album is one of frustration and anger against the failure of our system and the anarchy that is allowed to run rampant. Kingdoms Disdained is an album that feels right at home with the early 2000s releases on which Tucker fronted. However, there is a modern sensibility here to the arrangements and style the new lineup has adopted which fits the current mandate of the band: something that appears to be a return to their classic form but is also laced with a rawness and will to reclaim the throne they’d held for so long.

The album opens with “Piles of Little Arms”, a single that could have easily been pulled from Gateways. Between this track, “D.E.A.D.” and “Garden of Disdain”, it becomes immediately clear just how uncompromising this album is. Morbid Angel is at their most inspired here, with guitarist Trey Azagthoth‘s leads on tracks like “The Righteous Voice” feeling his most passionate and creative in some time. With infectious riffs and complex fretwork sounding like it could be right at home on Altars of Madness and Blessed Are the Sick, this is the Morbid Angel fans know and love, and the Morbid Angel they’ve been waiting to see unleashed again in over a decade. “Architect and Iconoclast” may be my favourite track on this album. It’s simply oozing with a grit and a poison that has become a trademark of Morbid Angel’s unique sound. It’s here I feel strong praise must be given to the band’s newest drummer, Scott Fuller (Annihilated / Errorgeist). Almost midway through this album, I was seated listening in awe at just how impressive this man is. His sonic barrage is relentless and touches on the best sides of the band’s original drummer, Pete Sandoval. However, that isn’t to take anything away from Fuller at all, either. While the influences are clearly there (and how could they not be, truly?), Fuller’s precise technical expertise and handle over his kit is undeniable. His timing against the guitars, bass, and Tucker’s distinct vocal venom is a thing to behold. All you need to do is look at this pairing during the breakdown on “Paradigms Warped”. This is one of the best singular moments in Morbid Angel’s career, and Tucker’s ominous bass notes are brought to the fore in a spectacular way.

The blast beats arrive with hellish fury on “The Pillars Crumbling” and “For No Master”, and it is on the latter where Dan Vadim Von‘s guitar work shines in his riffs and licks, and where Azagthoth again reminds us his solos remain some of the best in death metal. Between Tucker’s sinister growls of ‘heresy‘ on “For No Master” and it in the opening to “Declaring New Hymn” – where it feels like a cultist delivering a hymn – it is evident just how talented and versatile of a vocalist he is. While Tucker comes from a more traditional class of death metal vocalist, his harsh vocals always feel organic and aren’t ever strained. It adds this fearsome natural element to Morbid Angel’s sound that works so well to complement the unique death metal style of this band. As someone who has admired Morbid Angel’s music for some time, it pleases me to see them back in top form.

As Kingdoms Disdained closes out with “From the Hand of Kings” and “The Fall of Idols”, Morbid Angel has once again delivered a cornerstone of the death metal genre. This is an album that erupts forth with a sense of the band’s four members invoking the Four Horsemen, bearing witness to Earth’s end as the mighty drag Armageddon behind them on the hooves of their great steeds. They stand at the vanguard, unfurling their scrolls as Morbid Angel cries forth messages of war, destruction, and hatred for the failings of mankind. The lords of death metal are back, come and see.