LUCIFER’S HAMMER ‘Victory Is Mine’ 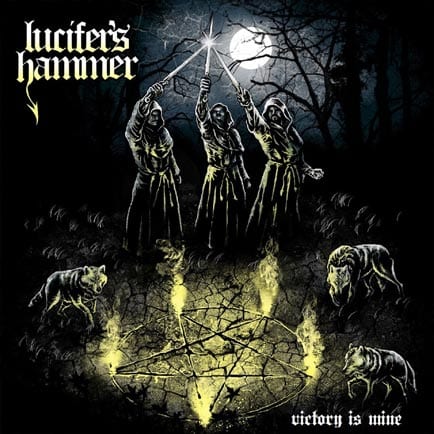 South America has produced some great metal bands over the years, such as Angra, Krisiun, and the mighty Sepultura. Keeping the Latin-American metal flag flying, up-and-coming Chilean three-piece Lucifer’s Hammer continues to make waves with their second release, Victory Is Mine, about to be released through Shadow Kingdom Records.

The band turned a few heads with their acclaimed debut, 2016’s Beyond The Omens, and they have followed it up with this ‘mini-album’, featuring four epic tracks. Heavily influenced by ’80s metal, particularly Iron Maiden and Judas Priest. With a touch of Metallica and even a little Sabbath, Lucifer’s Hammer really harnesses the energy of their forebears.

While the old-school thrash influences are there, the band also infuse crunching rhythms, tempo changes, and combinations of heavy and melodic to produce epic songs. The opening track, “The Valley of the Shadow of Death” begins with a slow, haunting intro that builds to a catchy mid-tempo thrash riff. The second track, “Thousand Nights (O.O.T.S.)” is the real standout. It begins slowly and builds into a banging riff. It contains a mellow, Metallica-esque mid-section, and builds again to a huge ending.

“Warriors Of The Storm” continues in the same vein, while closing track “The Destroyer” (Legend US cover) shows off the band’s diverse arsenal, with a completely different style of structure, riff, and vocals.

While Victory Is Mine isn’t a full studio album, what sets it apart from Beyond The Omens is a slightly bigger sound and more polished vocals from Hades. It highlights Lucifer’s Hammer’s astute musicianship, clever songwriting, and quality production. Well worth a listen.