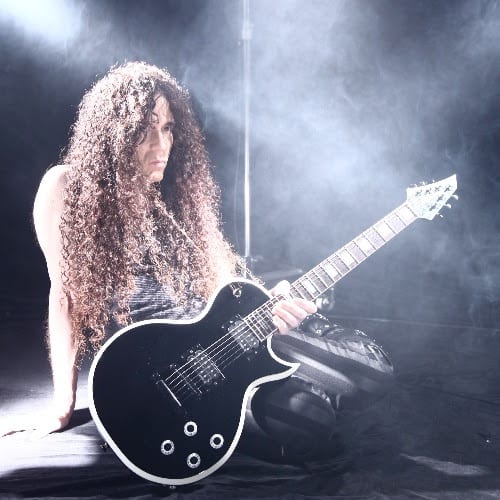 True music fans need no introduction to Marty Friedman. With other thirty years experience in the music industry Friedman has been part of bands like Megadeth and Cacophony during his career as well as releasing 15 solo albums and becoming a household name in Japan where aside from being a musician he has also become a television star.

This December sees Friedman bring his band to Australia for the first time and aside from the regular shows he will also be holding very special Masterclasses for his most devoted fans. To find out what Aussies can expect from the tour and these Masterclasses HEAVY Mag took the opportunity to sit down and have a chat to Friedman from his home in Japan.

“I’m very, very excited myself and my band is beyond excited,” says Friedman as we begin to talk about the Australian tour. “It is very rare that Japanese musicians get to play their music in a place like Australia. That is like a legendary place for a rock musician from Japan so we are just really nervous about what kind of response we will get. It came about the way a lot of tours come about… we got an offer. Now normally nine out of ten times the time frame doesn’t work or other things don’t work out and it doesn’t happen for one reason or another, but this time we got a nice offer and it worked out so we see it as a great opportunity to reconnect with people Australia that has followed us for so long.”

The mention of Japan steers the conversation to what made Friedman move to Japan in the first place and to chat about some of the amazing things he has done since he moved there. “Well the short answer would be that I wanted to get involved in the Japanese domestic music scene,” he explains. “I just wanted to be part of it because I felt that in Japan the pop music, the rock music, the heavy music, every kind of music from Japan just seemed to really speak to me and I wanted to pay tribute to it in a unique way if I came to Japan.”

“So I did… I moved to Japan,” he says continuing. “The next moment I’m touring with one of my favourite singers and then after that I got introduced to doing television over here and since then I think I have done about 800 television shows, movies and television commercials…. things have really gone way beyond my expectations.”

“Regardless of what I do though it is still my music that I consider my real job,” he says. “I have done things in other areas but I still try to do as much music as I can in Japan and around the world, being in Japan has been the best thing ever for my career and I can really hear that in my records if I can say that while still being modest. Being in Japan as allowed me to grow as an artist and a musician and come up with some of the best stuff in my career.”

For true fans of Friedman, this Australian tour is going to be a true celebration of his career and he says he plans on bringing out some hidden gems. “Because this is my first solo tour of Australia I am going to do things a little bit differently than I normally do,” Friedman says. “Usually when I am on tour I am promoting my recent album and I’m playing most of my stuff from my last two or three records, but because this is my first time in Australia I am going to go back through all my old solo albums and really dig deep through that stuff because I am sure that there are a lot of people there that have been following me throughout my career. So to apologise for my absence from Australia I am going to play a lot of stuff I have never played live before. I just played a festival in India and I headlined so I played for nearly two hours and that gave me the opportunity to play stuff I had never played live before and it really worked so I am going to do something similar in Australia, I’m not going to be just playing the new stuff I’m going to be playing stuff right back to Dragon’s Kiss.”

In closing Friedman says, “I know I haven’t been there and playing live in a long time and I am just really happy that people haven’t written me off, from the emails and stuff I have received about the tour it seems that everybody is still really excited that I am bringing my band down there. So, I have nothing but true appreciation for everybody’s patience. I am really excited to bring my band, my band will outshine me every single night. You might be coming to see me but you will be leaving every night talking about my band.”

All the details about Marty Friedman’s tour can be found below. 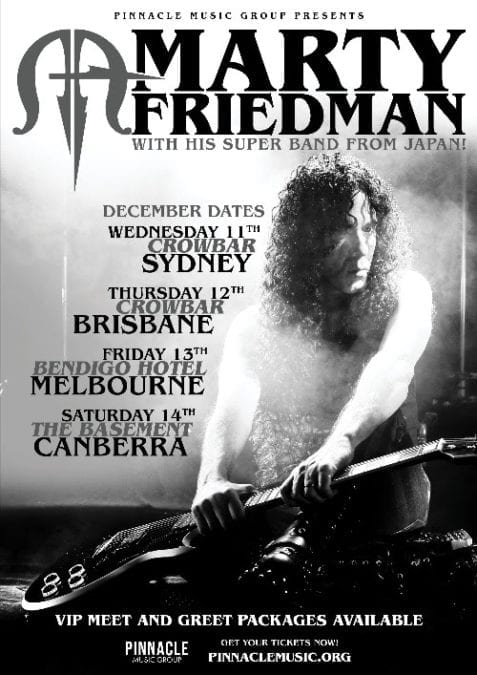