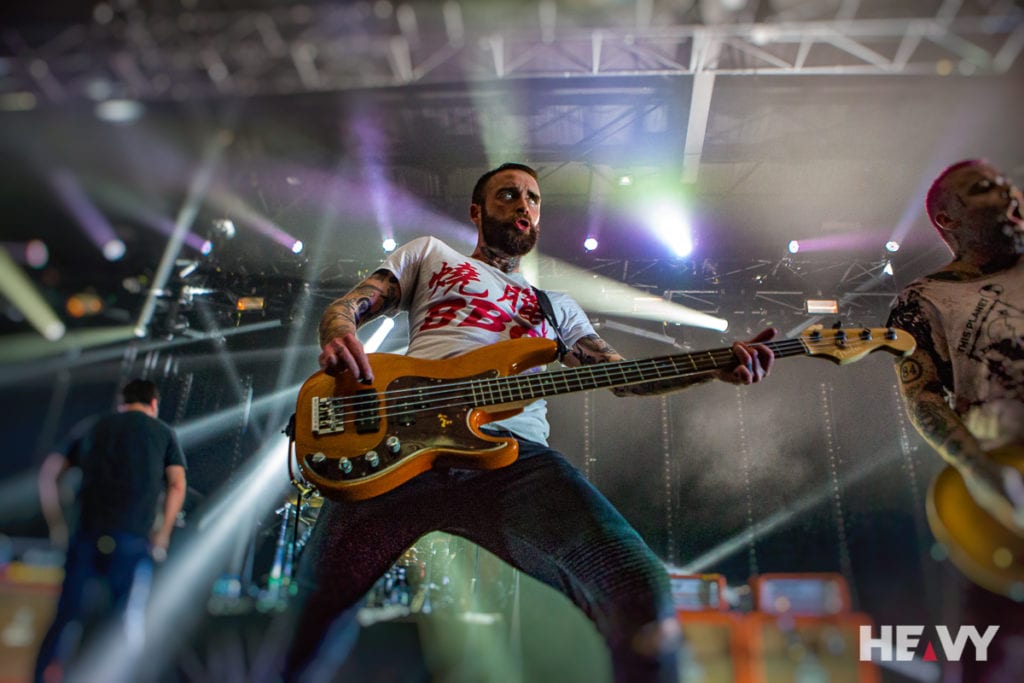 Dame Nellie Melba, John Farnham, KISS and now Alexisonfire. What do these artists all have in common? They are now all artists that have announced farewell tours, changed their mind and then returned to Melbourne with triumphant returns. Mark down the 17th January 2017 as the date that Alexisonfire stormed back into Melbourne and showed the packed Festival Hall crowd that not only were they back but that they were also still capable of putting on a bloody brilliant show.

It seems that whenever these Canadians roll into town Melbourne knows how to turn on a hot day. It was the same back in 2012 on their farewell tour, and yesterday the 38-degree heat warmed up Festival Hall long before Behind Crimson Eyes and The Getaway Plan hit the stage. But boy did they indeed set the stage for the brilliance that was about to come.

Behind Crimson Eyes’ orchestral opening soon gave way to Josh Stuart’s now familiar snarls and roars that have served this band so well over the years. It didn’t take them long to get the early medium-strength involved with an amped up version of Shakedown. The Art Of War saw the band reach full flight, while a flashback to their first EP with Game Of Life thrilled the more hardcore BCE fans around. The Bonesman again lifted the spirits of the heated up crowd while the thunder and rain opening to The Black Veil reminded everybody of the stifling heat outside, but still this set was enough to back us all wonder when we can hear something new album wise from this great band.

With BCE out of the way, The Getaway Plan then took centre stage with a melodic start but the band hit their straps when they got onto their heavier material and while they did get the crowd up and moving. It was when the band slowed things down with Shadows and Dark Horses that we were once again reminded just how good these guys are. The highlights of their set though where a brilliant version of Flying Colours and the track that now gets everybody singing along Where The City Meets The Sea. The band then left the stage as their hit an epic crescendo with Requiem.

It was then that Alexisonfire hit the stage with a pre-recorded theme song blaring that made it feel like we were about to witness a team of gladiators storm into the arena. Well if these guys were gladiators they not only put on a show to impress the Emporer but made every lion in the pit their bitch.

There was no easing into it for Alexisonfire. They put on a clinical yet brutal set right from opening track Drunks, Lovers, Sinners And Saints and then didn’t let up for the entire set. Everybody seemed to get in the act. Soon the crowd were crowd surfing, jumping and doing some rather vicious circle work something that seemed to take the band by complete surprise. Yes, we often hear bands ‘congratulating’ the crowd that they are currently playing in front of, but here it seemed genuine, even to the point where it felt that the band fed off the energy of the band in front of them.

This, in turn, seemed to see the band perform tracks like Old Crows and make them see like anthems designed to reassure the crowd ‘yes we are back and yes we still to be at our best for you guys.’ This was a gig designed for the fans, and the result was tracks like We Are The Sound and Boiled Frogs being performed with an intense energy that has set a high bar for any other bands venturing to Melbourne this year.

Perhaps the most impressive thing about the night was that fact the band performed with such full on aggression that Crisis felt like a war zone while tracks like Caliber Love Letter that started out slow built to an insane intensity that most bands wouldn’t be able to sustain for a 90-minute set like these guys did.

In a set that was full of highlights, it was hard to pick out a favourite, but it seemed the band did reach a new height when they performed the Junior Kimbrough penned Sad Days, Lonely Nights. With lyrics like “My momma told me when I was a child. She said, “Son, You’re gonna have hard days.” My daddy said to me too. He said, “Son, You’re gonna have sad days. Lonely nights…” it was little wonder that Alexisonfire was able to make this a genuinely emotional track.

There is little doubt that anybody at Festival Hall is going to remember this gig for a long time. Gigs with this much intensity don’t come along very often… so all I have to say is “welcome back Alexisonfire… old friend.”