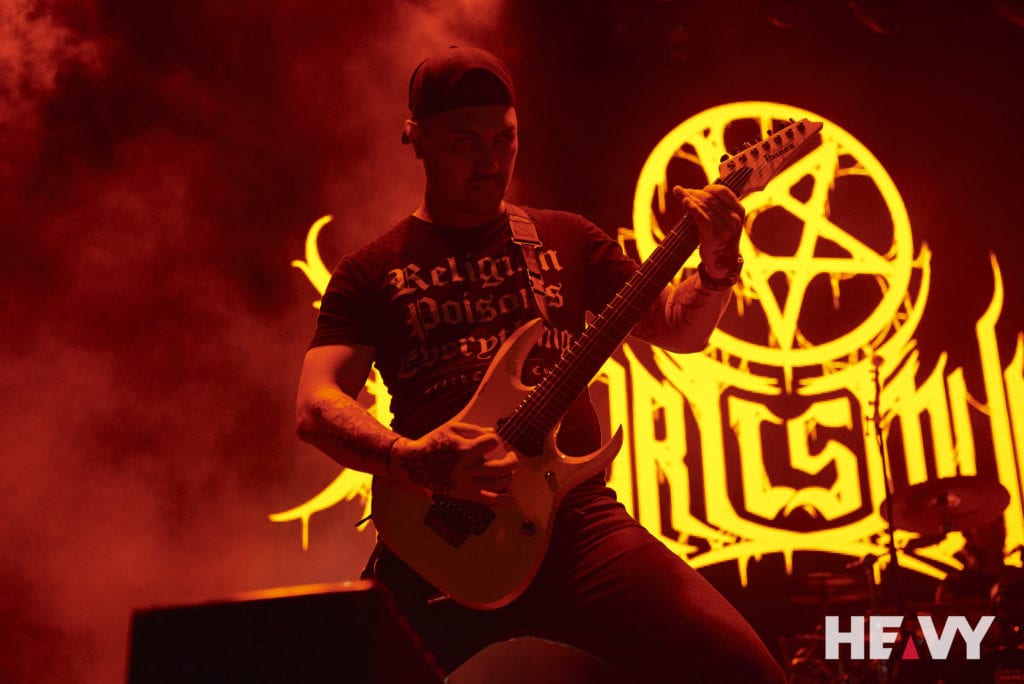 With surely an abundance soreheads clambering around the main arena, an early start was probably not what most would have wanted; genuinely a few would have preferred possibly an early death. Melbourne’s Pagan had the deserved privilege of opening the second day and improve these deteriorated feelings with their proclaimed “Death & Roll”. To be frank, this scribe believes the quartet could have easily played a later time as their brilliant artistry and flair required more attention; but this was a magnificent opening, and if Oathbreaker is to tour Australia soon, Pagan is THE band to support them.

Sydney’s Bare Bones then brought a sleazy southern punk party vibe which seemed to enhance the celebration, including songs such as Outlaw Blues, Humble Wasteland and Road Worrier. However, it was their cover of Rage Against The Machine’s Guerrilla Radio that actually provoked movement and sing-alongs. Bare Bones were not quite the hangover cure but more-so “hangover pure” and the suffering was certainly easing thanks to them.

As the rains had subsided somewhat, the drenching would have to come in a different form via post-hardcore meets metalcore sweethearts Melbourne’s Drown This City. Exhibiting an engaging, professional and polished live show, it is very difficult to believe that the quintet is only just over a year old. Featuring tracks from their EP False Idols, the five-piece acquired deservedly the attention of the gathering. Front-woman Alex Reade is admired in her role and her melodic moments have the strength and reminiscence of Amy Lee, but with just a little more originality in their music, DTC could really carve a proper identity and steal the spotlight.

Brisbane’s The Brave did not quite hit their stride in their early time slot, perhaps their slight Architects inspired melodic metalcore comparable to The Here & Now era was just not the musical concoction needed that this particular time, but their effort was valiant regardless. The appearance of Marcus Bridge for the song Dreamless was the pinnacle.

Canada’s punk trio The Dirty Nil were criminally unappreciated for their set of infectious punk tunes but admirably powered through and accomplished stealing some new fans with their sterling hits from their High Power LP.

Every aspect of sublimity seemed to combine exquisitely for the appearance and reunion of Perth’s Saviour. The audience hung on their every move thanks to their blend of metalcore to electronic spiritual euphony (thanks mostly to keyboardist Shontay Kennedy Snow) and best of all the festival coincided with their new album release Let Me Leave. The direction the sextet have taken with the new songs is unquestionably the right move, and hopefully, an ascension is rewarded to Saviour for their resilience and progression in the not too distant future.

The path to once again get wild had now been established with ease, thankfully the boost was to come from Deez Nuts. Suitably JJ Peters and his party arsenal kicked this off with Like There’s No Tomorrow which instigated rave enthusiasm. Stay True was testament that the quartet are the leaders in this niche of hardcore music and honestly this writer has never seen Deez Nuts at such an elite level. The anticipation for the new LP should be practically immeasurable.

UK Emo outfit Moose Blood provided a graceful wind-down score with their heartfelt tracks Honey and Glow. Even if the quartet were musically slightly out of place at Unify Gathering, they managed to harmonise without issue which exemplifies the four piece’s ability to write first-class songs.

Newcastle’s Trophy Eyes were thankfully back in Australia to promote their new record Chemical Miracle and the reception for them was their biggest yet. Heaven Sent had the quintet at full flight, but more like a young pterodactyl’s first flight attempt than a grown white-tailed eagle. This awkwardness, however, is Trophy Eyes’ captivation and exactly why so many people gravitate toward them, quite similar to the early days of Title Fight. Hopefully, the New South Welshmen can spend more time home than abroad for Australia’s sake.

Exposing the best from our wonderful nation, even more, it was time for the current finest in Tasmanian punk Luca Brasi to get their “mates” (in other words, the entirety of the festival), singing as loud as they can to their Hot Water Music motivated choruses. With an Australian flag waving the entire time the four-piece were onstage, it felt as if Australia day had arrived early. Say It Back, The Cascade Blues and Anything Near Conviction incited volumes louder from the audience than the four Taswegians could exhibit themselves and fortunately if they were missed by the readers, they will be touring soon with Laneway festival for more of their mates to enjoy.

Melbourne’s Storm The Sky transformed the artistic atmosphere to a “left of centre” direction with their death-pop-rock; although perplexing, this confusion increased their intrigue to an elevation the now quintet have probably not experienced in their career yet. Wake Up Sleeping and Jaded Ghost roused the best responses from the attendees and truthfully with a more intimate setting and lights show, this new musical direction live would be hypnotic.

The departure of I Killed The Prom Queen from the festival was one which upset many fans who were eager to see the metalcore mainstays; however, to fill the vital time slot thankfully UNFD organised Australia’s finest pop-punk outfit Bodyjar. These Victorian gentlemen were here to educate, stimulate and best of all fascinate whoever was caught in their grasp. One In A Million, You Say, Is It A Lie?, Fall To The Ground, Hazy Shade Of Winter, Role Model and Not The Same delighted predominantly the more mature punters present, but the younger festival-goers were ecstatic to see The Amity Affliction’s Ahren Stringer joining the quartet onstage numerous times to sing his favourite songs.

If there were one band no this entire line-up which could be classed as the “hot topic” of questioning it would be Sydney’s deathcore titans Thy Art Is Murder; simply because it was unknown as to who would be fronting the outfit. To answer the question, the five-piece introduced the vocalist in an absolute blaze of glory: Darkness, smoke machine and a hazy inauguration to reveal CJ McMahon had once again rejoined the ranks to the satisfaction of thousands. If there was any trepidation about CJ’s return, these were thrown far aside by the live execution of Purest Strain Of Hate which was thunderous, haunting and brilliantly brutal. Welcome back Mr McMahon.

After completing the largest scale tour of their lives and performing at the ARIAs as well as winning awards for their latest album WACO, it seemed logical for grunge punks Violent Soho to rejoin the festival circuit in Australia to exercise what they do best. This was pandemonium simply put, bodies were flying about for what seemed to be hundreds of metres, dancing had become an entire crowd synchronisation, and Soho was thankful for all of it and more. Covered In Chrome was deafening due to the audience’s participation and honestly, the whole performance felt unrealistic it was that supreme. The boys from Brisvegas have unmistakably proven themselves to be one of Australia’s premiere rock acts.

In 2011 the post-hardcore fans of the world became collectively distraught at the announcement of the demise of Canadian supergroup Alexisonfire. In 2015 Australia was left disappointed while the remainder of the western world rejoiced at the declaration of the band’s reunion which was completely missing “down under” altogether. In 2017 the fine folks at UNFD decided Australia were due for their turn and the Canucks happily obliged.

Upon taking the stage at unify gathering, the grasslands had completely disappeared from sight; all that was visible was an ocean of hands and heads of devotees above elated to see their favourite Ontarians play possibly one last time.

Young Cardinals opened proceedings but honestly Alexis could have just provided the musical backbone for the song, Tarwin Lower had become the voice for the track. Boiled Frogs then allowed for some moshpit aerobics with the ground nearing earth-quake status from the bouncy anthem which came to a less dangerous scene when the Australian unify gathering choir was required again for This Could Be Anywhere In The World.

The Canucks were in unrivalled form throughout their entire performance: We Are The Sound, Drunks Lovers Sinners And Saints, Rough Hands, Dog’s Blood, Pulmonary Archery and Happiness By The Kilowatt were presented as if it was written into each members’ DNA and with the passion to boot.

Even though it felt as it was all over all too soon, the best way to summarise is through an Alexisonfire song itself entitled To A Friend; this address is exactly what unify gathering is: A friendship and family first, above a festival. So in return to UNFD and all the bands who took part Australia thanks, YOU, January 2018 cannot come soon enough.