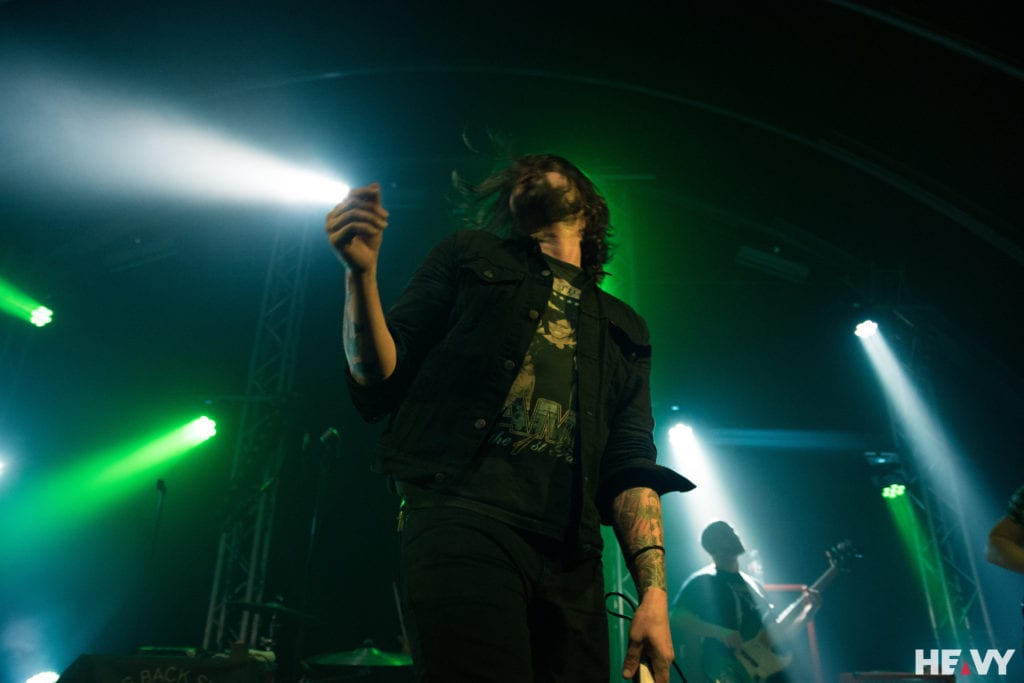 Making their debut tour of Australia, Acceptance have taken the hard route to success.

After forming in 1998, the band broke up after their first album Phantoms in 2005 before reforming a decade later and bringing out Colliding by Design which thrust them back into the spotlight.

With a blend of soft pop punk with slightly rockier undertones, Acceptance hit the stage playing a selection of tunes from both albums.

After an underwhelming start with ‘Diagram’, the boys turned the tempo up noticeably with ‘In Too Far’ and it was refreshing to see a support band with so much crowd acceptance.

Their catchy melodies and big choruses have obviously reached the Australian marketplace with large numbers of young fans singing along to the lyrics and letting out a scream after each song.

Bass player Ryan Zwiefelhofer was having a ball onstage, while lead guitarist and back up vocalist Christian McAlhoney provided an extra spark and intensity to proceedings.

‘So Contagious’ and ‘This Conversation’ provided the highlights, with vocalist Jason Vena constantly reminding us how fortunate and appreciative a band from Seattle, Washington were to be performing in front of fans in another country.

By the time Taking Back Sunday came on to the minimalistic stage set up – a large bandanna emblazoned with the bands name draped over an upturned road case was the only indication of just who was playing – the mostly young crowd were dripping with anticipation and the band didn’t disappoint, launching headlong in to ‘Deathwolf’ and whipping the crowd into a frenzy with a massive and tight sound that belied their reputation as a younger generations pop punk band.

If Acceptance were from the softer end of the spectrum then Taking Back Sunday were from the complete opposite end of the genre, putting the punk firmly back in pop with a professionalism and sense of fun that dared you to not pay attention.

By the time the first note of second song ‘Liar’ reverberated through the venue vocalist Adam Lazzara had the fans hanging off every word, with his helicopter like use of the microphone threatening to knock unconscious anyone not paying full attention.

The band are obviously good mates on and off stage, which was evident by the stage performance which was punctuated with lashings of humour and showmanship which provided respite when necessary for the crowd who were packed to the front and being wrapped up in the sound.

The band seemed genuinely humbled by the support, launching into tracks from their catalogue, including ‘Ghost’, ‘Decade’, ‘Faith’ and ‘Set Phasers’ which were all sung with gusto back from the dance floor.

Guitarist and back up vocalist John Nolan was at his mesmerizing best, punching out restrained solos that added substance to the songs without ever overshadowing them.

His backup vocals added an extra dimension to the music, with Taking Back Sunday being blessed by the rare ability to almost have two separate vocalists sharing duties.

The band are much heavier and meatier live than on disk and were seemingly having the time of their life on stage with Lazzara repeatedly telling fans how happy he was to be here. Rather than sound contrived, the appreciation was sincere and was returned in turn from the crowd who saved their biggest applause for songs from  most recent album Tidal Wave.

The title track, ‘You Can’t Look Back’, ‘All Excess’, “Holy Water’ and ‘Call Come Through’ were amongst the best received of the set, but the final two songs of the night, ‘Cute Without the E’ and ‘MDS’ drew the best response with fans singing the lyrics back so loud that Lazarra had no choice but to hold the microphone aloft and allow the crowd to finish the chorus for him.

Moments of musical carnage were punctuated with moments of subtle brilliance, with Taking Back Sunday making an emphatic statement of a band at the top of their game.

With just the right blend of drama, appreciation and musicianship, this show delivered all it promised and more and is further proof that pop punk is a genre bound by no limitations except good, honest rock music with a twist.