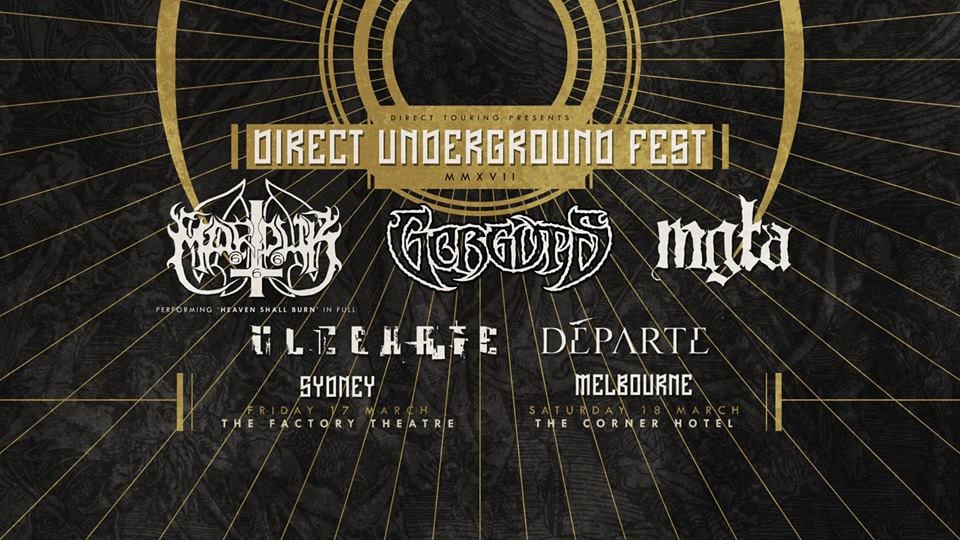 The Direct Underground Fest [sic.], organized via Direct Touring, promised one of the most brutally savage line-ups ever assembled. From the harrowing post-tech death of Gorguts and Ulcerate to the abrasive black metal of Marduk, Mgła and beyond; this was clearly not a spectacle intended for the faint of heart.

Early-comers were greeted by the harrowing sounds of Aussie depressive/post black/death metallers Départe. As the lone local act on the bill, the Tasmanians managed to held their own among their international cohorts. However, the more contemplative nature of the band’s material meant that they also came off as one of the night’s lesser offerings. The emotionally oppressive material from their outstanding debut record, last year’s ‘Failure, Subside,’ sounded equally rich in the live environment. Yet they also struggled to truly engage with the early crowd via their sullen and static performance.

Up next were New Zealand post-tech death masters (and personal favourites of mine) Ulcerate. The three-piece have a legitimate claim to being the heaviest thing on the face of the Earth (suck it Oganesson) and severely upped the ante following their melancholic proceedings. Even on such an extreme bill as this, Ulcerate were easily the most oppressive act in attendance; and while they were perhaps a touch slow to get off the mark, by the time they closed their set out with a nigh-apocalyptic rendition of ‘Everything Is Fire,’ there was no denying they’d wrought some serious sonic destruction on the Corner.

Without at all undermining the prowess of guitarist Michael Hoggard and bassist/vocalist Paul Kellard, there’s no denying that drummer Jamie Saint Merat is the star of the Ulcerate show. Wielding a kit featuring not one, two or three, but four splash cymbals—and various other parts therin—Merat is utterly relentless in his assault, with much of the sets tension deriving from his jarring time-switches and constantly unfulfilled teasings of groove. This wasn’t the best set I’ve ever seen from the New Zealanders, but it remained an unadulterated exercise in brutality that few could ever hope to match.

However, as well as things were going, by the sheer oppressive nature of the opening two acts, there remained a clear disconnect between the bands and the crowd. One of the key components of a true ‘festival’ is the actual act of communal celebration, rather than the mere display of something deserving the be celebrated; and, up until this point, the Direct Underground Festival was struggling to transcend mere exhibition. Enter Poland’s Mgła (pronounced ‘Mgwah’), who not only proved the most popular band of the night—their merch completely selling-out by the time they took the stage—but also arguably delivered its strongest set.

For those unfamiliar, Mgła practice a somewhat melodic brand of black metal, which, on its surface level, combines the layered textures of Nachtmystium with the more straight-forward rock and roll approach of Immortal at their most direct. Dressed in black hoodies beneath leather jackets, with their faces completely obscured behind plain black balaclavas, the four theatrical shapes managed to whip the crowd into a receptive frenzy—to the point where not a few punters were witnessed actually dancing along to their grim offerings. The three false endings contained within the eight-minute-long closer, Exercises in Futility VI, may have been a bit much, but it was clear that the rabid crowd would have continued eating it up for as long as the Poles continued to serve it up.

On to the first of the night’s big Headliners: the mighty Gorguts made their triumphant return to Australian sores by way of a punishing three-song set; consisting of Le Toit du Monde, the opening track from their masterful comeback record ‘Colored Sands’ (2013); their most recent offering, the half-hour-long, single-track EP ‘Pleiades’ Dust’; and the title-track from their landmark, 1998 record ‘Obscura’.

Again, the entire band were utterly incredible. Yet, as with Merat, it was clear that the star of the show was the band’s ubiquitous frontman, Luc Lemay (46). The distinctive frontman towered over his microphone with his silver hair blowing back in a distinctly cthulhian manner—laying down alternate bursts of dissonant, atonal technicality and ferocious, otherworldly shrieks. Beyond being the focal point of the performance, Lemay acted as a fulcrum between the uber-technical trade-offs between (notably younger) bassist Colin Marston and lead guitarist Kevin Hufnagel (both Dysrhythmia; Marston also Behold The Arctopus). Lemay seemed genuinely thankful to be received so well by the crowd and was frequently spotted, both before and after Gorguts’s set, out among the crowd, watching the other bands. Truly a class act.

Marduk are a black metal band who play black metal, and if you like black metal then you probably would have liked all the black metal Marduk played. Coming off the back of the recent controversy surrounding their canceled Oakland show, tonight saw the band playing their 1996 album ‘Heaven Shall Burn… When We Are Gathered’ in all of its thirty-five-minute entirety, followed by a couple of tracks from their most recent record, 2015’s ‘Frontschwein’ (including the provocatively-titled The Blond Beast) before capping the night off with a few deeper cuts from their vast discography. Adding to the novelty was the fact that the band seem to have recruited WWF/WCW wresting superstar Goldust into their ranks (on lead guitar), so that was cool to see.

The Swedes were forcefully proficient in their delivery. However, following the ‘out of this world’ stylings of Gorguts and Ulcerate, and more evocative sets from Mgła and Départe, they also came off as being somewhat flat—no matter how much fire and brimstone they threw into their performance. Additionally, it is the humble opinion of your reviewer—and seemingly that of the general consensus—that Marduk have in fact peaked with later offerings, such as ‘Serpent Sermon’ (2011) and ‘Wormwood’ (2009). Thus, the focus on the bands earlier, formative years—while of historic interest—perhaps meant that the band didn’t get to bring the strongest parts of their arsenal to the fore.

The inaugural Direct Underground Fest had its ups and downs, and at times its overwhelming brutality did indeed get the better of it. However, as a show of extreme metal force, it’s hard to think of the outing as anything but superlative, and one wonders just how exactly they intend to up the ante, should future ‘Fests’ occur.