[LIVE REVIEW] REFUSED + Sick of it All + High Tension at The Enmore Theatre, Sydney 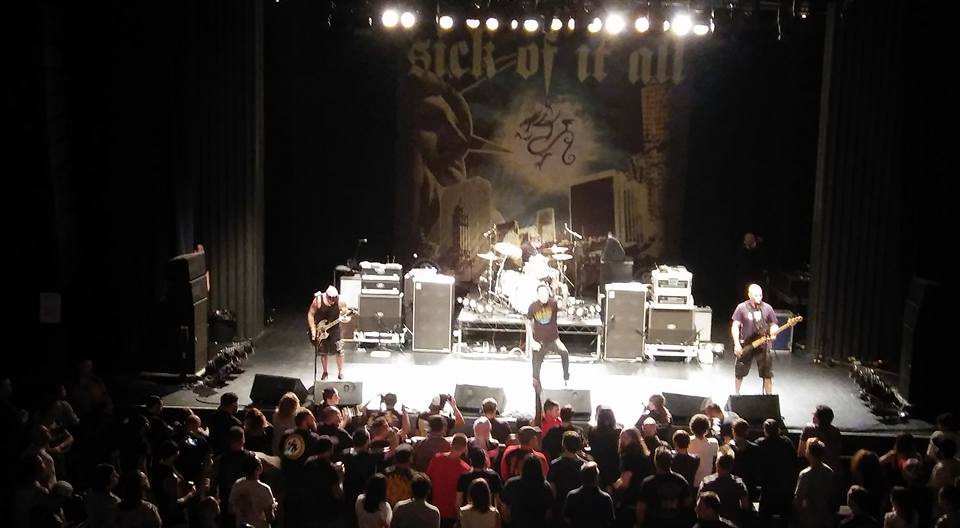 What started off as a cooler day in Sydney, after the punishing heat wave, saw a slight turn around as tonight’s stellar line-up brought the heat back to Sydney. Tonight was going to be one sweaty night for those on the dancefloor.

Kicking things off with Collingwood’s heavy hitters, High Tension who set the mood for what was to come later that evening. The majority of the set saw front-woman, Karina Utomo running around a circle-pit with the mic in tow, screaming with fans. The rage and fury of Utomo‘s screams and off-and-on stage presence were enough to scare the life out of the incredible hulk.

Guitarist  Mike Deslandes let loose thick riffs that had a certain groove to them which was enough to cause some head banging and prepare one for sore necks tonight. The Matt Weston, Lauren Hammel combo of bass and drums, respectively was tight as the grip of the hand of drunks on a bottle of hard liquor. Mainly focusing on tracks off Bully (2015), such as Sports, Killed by life and, the title track, Bully it was nice to see the band finish off with an older track of their debut, Death Beat (2013), being High-Risk High Rewards. Tonight was going to be a good mixture of genres, and Melbourne’s High Tension did a mighty fine job as the opening act. The very humble Utomo spoke of being from Jakarta and the first time she picked up The Shape of Punk to Come and what it meant to her sharing the stage with Refused and hardcore titans Sick of it All, who soon hit the stage.

It had been thirteen years since this reviewer witnessed SOIA and the four-piece hadn’t aged, sounding better than ever, celebrating an incredible thirty years tonight. The Wall of Death is still present however it didn’t seem as brutal as it was thirteen years ago. Perhaps due to the younger crowd.

After the recent release of promising EP, When the smoke clears (2016), it is certain SOIA intend on releasing many hardcore anthems to come. It was good to see brothers Lou and Pete Koller in fine form tonight. As the guitarist, the amount of bone-crushing riffs to come from Pete as he jumps around the stage with no end in sight is a sight to be seen. The energetic guitarist seems to get more air than Michael Jordan; only difference stomping riffs come when hitting the ground. Lou, on the other hand, leads the pack, keeping the audience involved throughout the set informing members of the crowd who had probably never heard the band how they had been around for thirty years and punk and hardcore is what they do. Going by tonight, they continue to do it extremely well.

Armand Majidi is a beast behind the kit as he plays at break-neck speed, with Craig Setari, keeping up frantically on the four string to classics such as old fan favourites, Injustice System and Clobbering time. All spruced up sounding fresh mixing it up with recent tracks from last effort, Last Act of Defiance (2014), such as DNC and Get Bronx. Highlights included both Scratch the Surface and Step Down, taken off Scratch The Surface (1994),  Us vs. Them, taken off Built to Last (1997) and Let Go off Call to Arms (1999). It was going to be a hard task with the extensive back catalogue of thirty years consisting of eleven studio releases and some EP’s. However, a good mix of the new and old was on display tonight within a generous hour-long set. SOIA  proved why they are New York Hardcore’s finest.

Sick of it all just as well could have been tonight’s headliners however Refused were returning to where this reviewer saw them last in 2012 at this very venue. Last tour was more of a greatest hits set featuring many older tracks such as Pump the Breaks and the like, which were missing tonight, apart from Rather be dead, a song written twenty-one years ago, off Songs to Fan the Flames of Discontent (1996), as well as Coup D’Etat and Life Support Addiction.  A lot has happened since then with the release of Freedom (2015) which is focused heavily on tonight. Tracks such as set-opener, Servants of Death, Dawkin’s Christ, Destroy the man and Elektra, the first song heard after the encore all go down well tonight and they sound even better on stage.

Frontman Dennis Lyxzén throws the mic around and progresses the stage at times like Iggy Pop and comes across having more grace than a ballerina performing Swan Lake on set closer, Tannhäuser / Derivè, from the classic, Shape of Punk to Come (1998) which saw the disbandment til recent times with the 2012 reunion. It is songs from this album that prove highlights, sending shivers down the spine of many punters who have grown up spinning the disc. Worms of the Senses / Faculties of the Skull was a standout, receiving an encore that didn’t last long. Long time drummer, David Sandström belted the drum skins, not only with drum sticks but also by pounding them with his fists at times.

One song that was going to get the crowd going, not that it wasn’t already was New Noise, which sent the crowd ape-shit as it tends to take that effect. The Swedes put on an immense performance yet again, proving why they have such a large following. The comeback was necessary after the cult status achieved with The Shape of Punk to Come. Every genre is covered in the band’s music with elements of funk in the new music which blends in nicely with songs such as, Summer holidays vs. Punk routine, another song that sent chills with that riff towards the catchy chorus and the hard hitting, Refused Party program.

Everyone left satisfied tonight having witnessed an incredible line-up where all acts were humble thanking each other for them being part of the bill. From the Melbourne metal to the New York Hardcore to the Swedish post-hardcore on display, the gig ticked all boxes of greatness. 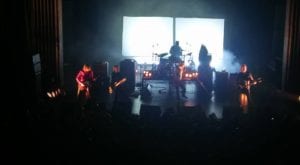 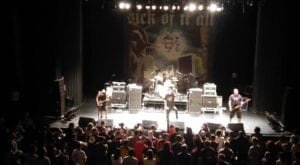 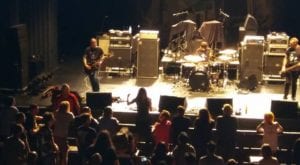