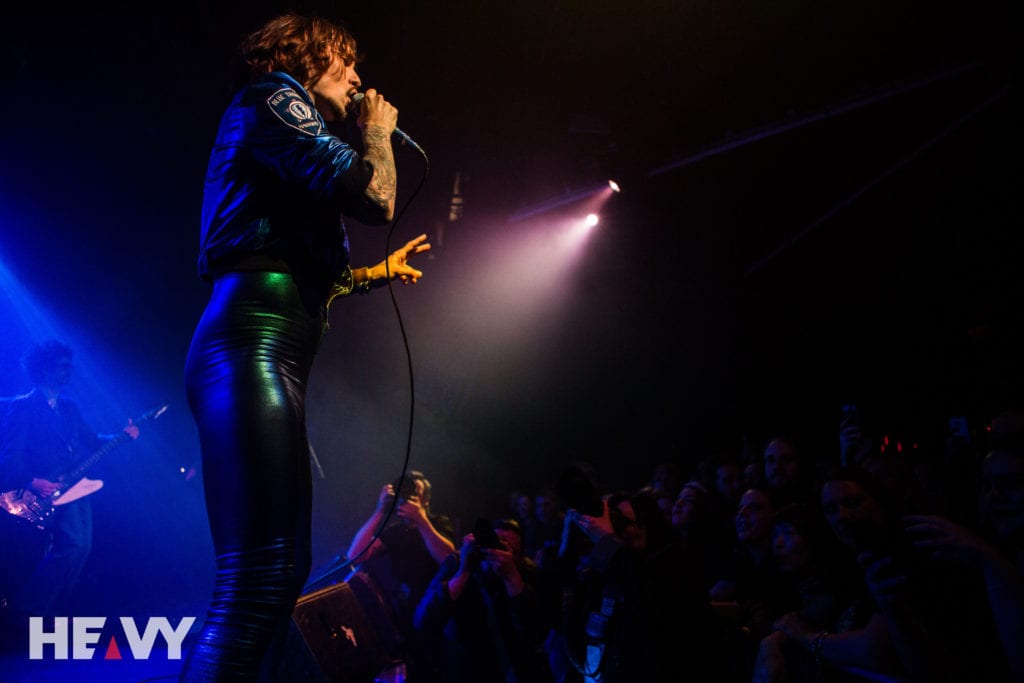 If you were walking down Russell Street in Melbourne last night you could be forgiven for thinking that you had fallen into some kind of time warp and flashed back to the 1970s and the 1980s. As if the fact we were about to witness Justin Hawkins take to the stage in his trademark jumpsuit didn’t enhance the time warp theory when a tall woman walked past in a skin tight cat-suit while also wearing cat ears and I really thought I was back in a time when ABBA reigned supreme.

A quick look at The Darkness on stage and you could be forgiven for thinking this is a band that belongs in the same category as Steel Panther but only a few moments into the set and you realise that with the talents of the Hawkins brother on show that this is a band that is sometimes unfairly under-rated and deserves to be mentioned alongside the better rock acts of our generation.

The fact the band walked onto stage in a blue neon haze only enhanced that 70s feel even more but what they erupted into was a rock show for the ages. As they launched into Black Shuck the rock star side of The Darkness kicked in – so much so that Justin’s microphone ended up in the photographer pit (sorry Matt if that was you that nearly lost your head!!!). By the time they swung into Growing Onto Me both Justin and Dan’s guitar playing was a way lot better than what I had expected coming to the night, they really reached a peak with Roaring Waters and then Justin’s vocals really hit their strides during All The Pretty Girls and any thoughts that The Darkness are any kind of gimmick band was quickly pushed to the back of my mind.

As the night went on one thing did really become obvious and that is The Darkness are the modern day Queen, led by a man who seems to have somehow invoked the spirit of Freddy Mercury – Justin Hawkins. It’s not only the clothes he wears or his swagger it is the amazing voice and musicianship that went on throughout the night. That was never more obvious than when he gave the audience vocal training during Love On The Rocks With No Ice. Hawkins interaction with the audience was part of what made the night seem so special. Whether it be his Disco Ball challenge in One Way Ticket or his hand-stand-with-feet-clapping in Get Your Hands Off My Woman he was always the showman but certainly had the musically ability to back it all up. That was well shown as the band delivered a true wall-of-sound with Japanese Prisoner Of Love and big rock guitar sound generated with Love Is Only A Feeling.

Of course the song that everybody was waiting for on the night was I Believe In A Thing Called Love and in true The Darkness style they threatened the audience with a slowed down version of their biggest hit before launching into it with full gusto and really whipping the audience into a frenzy.

The Darkness are probably one of the biggest surprises live that I have seen this year. While I was expecting an entertaining show I wasn’t expecting a show where I walked away thinking ‘wow…just wow’ about the guitar playing. Amazing.

PrevPrevious.[LIVE REVIEW] Architects and supports, Prince of Wales, Melbourne, 3rd May 2017
Next.[PHOTOS] MERE WOMEN and Supports at RAD Bar, Wollongong. 6th May, 2017Next