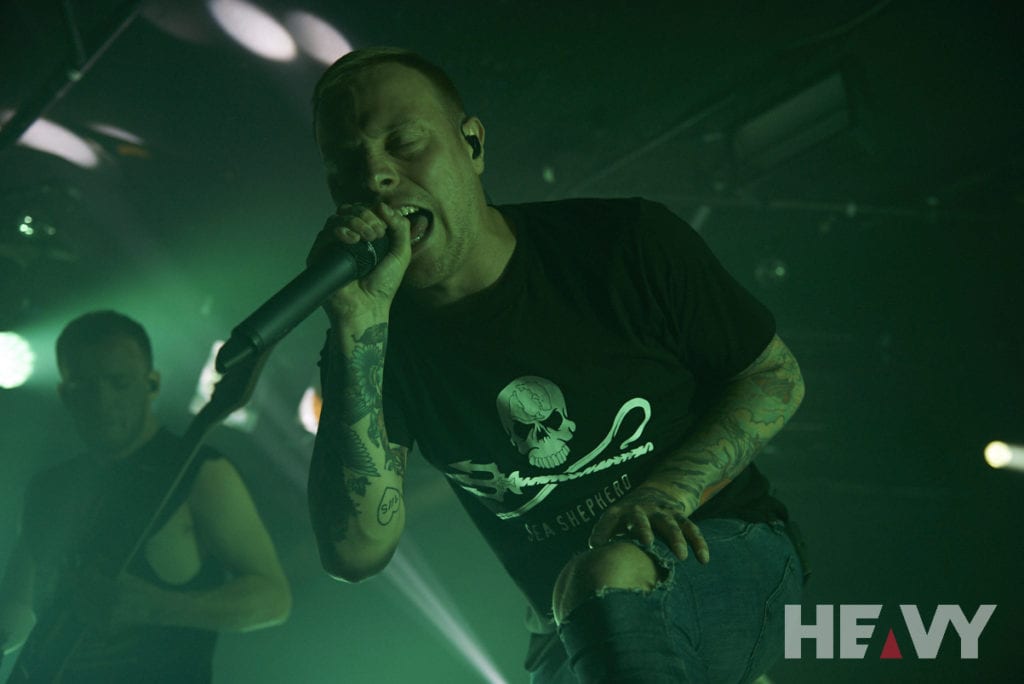 [vc_row][vc_column][vc_column_text] Architects were, for me, one of those bands that you really, really want to see live but circumstances, or time, or money, or your boss, or some other form of obstacle, have consistently managed to stand between you and being able to enjoy the experience you so desperately seek to have. Thankfully, this is no longer the case. May 3rd brought Architects to Melbourne’s cosy (read: sweaty and poorly ventilated) Prince of Wales Bandroom, which is actually quite a cool venue when there isn’t hundreds of people crammed into a room that probably wasn’t made to hold quite so many. It was a special, highly-anticipated night for not only myself, but virtually everybody in attendance after Bring Me The Horizon’s cancelled shows last year tore the UK metalcore outfit from our grasp. I can now say – as everybody else previously said to me – that Architects are a band everybody who is even remotely into heavy music should see at least once in their lifetime; the sheer intensity of their performance is something that defies words.

First on the bill were local act competition winners Gravemind who, prior to last night, I’d never heard of. A quick Google search landed me on their Triple J Unearthed profile, where they’ve uploaded a handful of death metal songs. This probably explains why I struggled to enjoy their set; death metal is not something that I frequent particularly often, and I found the vocals to be a bit jarring. Don’t take my word for it, however; listen to someone more qualified to assess Gravemind’s music, such as Unearthed user Mitch Alexander, who describes one of their songs “like the Tower of Terror, in that it starts at 100% but still manages to go somewhere different that terrifies you.” If that sounds like something you’d enjoy, Gravemind could be the way to go.

Next up was another Melbourne act, who you’d probably be able to guess with the description: “one of the best Australian heavy music acts going around right now.” Ocean Grove brought their signature charisma to the stage in what was yet another an unforgettable live show. Massive tracks like Beers and Intimate Alien from recent release The Rhapsody Tapes were anthemic in the way they were delivered and received; vocalist Luke Holmes’ rap-style vocalisation went down a treat with the sweat-soaked, eager crowd. Mr. Centipede and Thunderdome showed us another side of the hardcore act as bassist/back-up vocalist Dale Tanner’s soaring vocals, and the weighty rhythms of the music fused into one impressive explosion of energy. Long story short, Ocean Grove are always, always a good time and without a doubt deserved their spot alongside Architects.

I may have mistaken it for the humidity, but anticipation was thick in the air for the UK metalcore act. Launching into Nihilist, they kicked off a set that would demonstrate the ferocity, the passion and of course, their metalcore style they’re so well known for. The setlist was infallible; the selection of songs combined latest release All Our Gods Have Abandoned Us and Lost Forever // Lost Together, with These Colours Don’t Run being the only song from 2013 release Daybreaker. It was a showcase of Architects in their finest form. It’s no trivial fact that they are are among the most passionate of bands on the planet; a passion amplified tenfold by vocalist Sam Carter’s piercing screams, at there most powerful in Phantom Fear, The Devil is Near and Colony Collapse. Crowd favourites C. A. N. C. E. R. and Gravedigger turned it up to 11; strobe lights chased the rapid rhythms in what became a sensory overload, but the good kind. The show closed on Naysayer, but the crowd wasn’t done yet; a little coaxing brought Architects back out for an encore of A Match Made in Heaven and Gone With the Wind, and perhaps the most special moment of the evening, a heartfelt, emotional tribute to founding member Tom Searle, who lost his life to cancer in August last year. Even in these moments where there is no music, their passion is palpable and without a doubt integral to the band. It is for good reason that Architects are one of the best international live bands; few other groups are so vocal and so dedicated to the causes they support, and even fewer other acts combine this with such proficient songwriting and performance.[/vc_column_text][/vc_column][/vc_row][vc_row][vc_column][vc_masonry_media_grid grid_id=”vc_gid:1493869808490-c2056097-4ab8-6″ include=”53597,53603,53604,53605,53599,53598,53602,53601,53600,53612,53606,53607,53613,53614,53608,53609,53615,53616,53610,53611,53617,53620,53619,53618″][/vc_column][/vc_row]