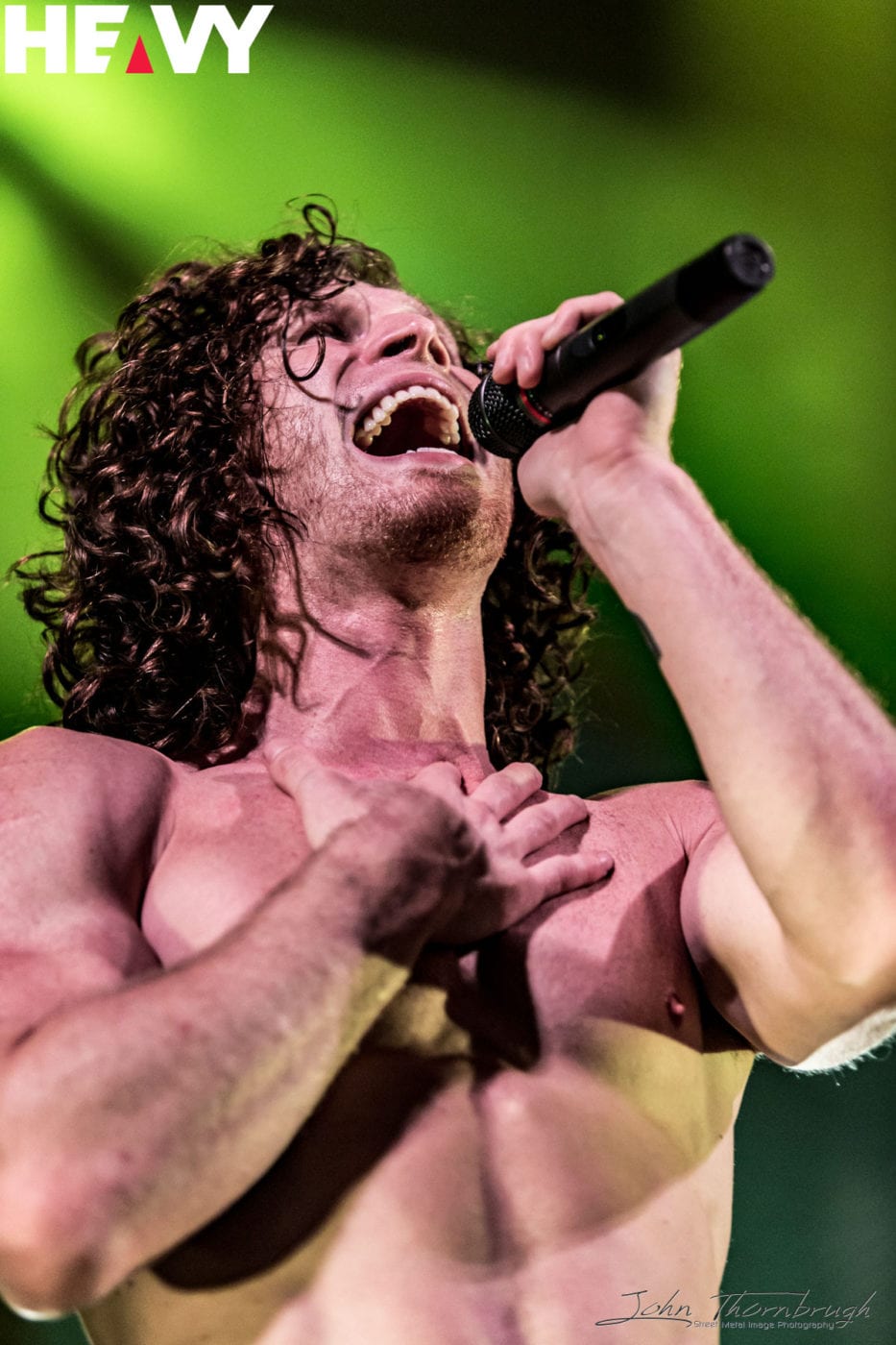 The Lone Star State alternative rockers, Nothing More, kicked off the first leg their 2017 North American headlining tour “The Noise Presents: Nothing More: The Stories We Tell Ourselves” in September with stops in Toronto, Boston, Denver, Las Vegas, Kansas City, Dallas and wrapping up in the band’s hometown of San Antonio on November 10th.

The tour is in support of Nothing More’s fifth studio album The Stories We Tell Ourselves released on September 15, 2017. The disc debuted at No. 15 on the Billboard 200 Album Chart with continued success peaking at No. 2 among the Top Hard Rock Albums and Independent Albums charts.

Anticipation grew as my wife and I hit the road heading toward San Antonio with the thought of seeing Jonny Hawkins, Daniel Oliver, Mark Vollelunga and Ben Anderson perform a hometown show in the presence of their closest friends and family. San Antonio’s most cherished architectural and historic landmark, The Aztec Theater, was the setting for the homecoming on the eve of Veteran’s Day. The fans were immersed with philosophical storytelling, robust bass lines, edgy guitar riffs and powerful drumming as well as plenty of end of tour pranks. One of the pranks came about shortly after Nothing More bassist, Daniel, strapped the grey Music Man Bongo Bass onto his one-off creation dubbed ‘The Bassinator’. As the iconic Bassinator jam came to life members of Hell or Highwater, Palisades and My Ticket Home entered the stage in jeans and shirtless, imitating Jonny, carrying a pair of bass guitars turning it into a Bassinator binge by performing their own parody of Daniels creation. The bass stings shuddered with flawlessly timed impacts from drum sticks as the Jonny clones began to dive into the crowd for some shirtless surfing atop the hands of energized fans. All the while looming ominously on the stage was Nothing More’s newest wild creation.

This jagged-looking extension off the drums was conceptualized and constructed by Daniel out of salvaged motorcycle and car parts assimilated with a series of levers, microphone and MIDI brain. Dubbed ‘The Scorpion Tail’ by the band members it weighs in at 400 pounds and boasts a height of 14 feet. The monstrous sound manipulator catapults into the air, with Jonny atop, when the band rolled into a Skrillex cover of “First Of The Year”. Standing on the drums Jonny drove levers and switches to manipulate his vocals in real time as well as Mark’s guitar and Daniel’s bass effects. The crowd went absolutely insane!

“We come from a perspective that the live show should be a totally different type of experience than what you hear on the record and we try to show that in every performance,” Jonny Hawkins

Over the last 4 years Nothing More carved out an identity for themselves, establishing a devout fanbase, with the use of unique inventive conceptions and dynamic energy on stage that has become legendary in its own right. Fans seem to have a connection with their songs that drive deep into the soul. Jonny engages with philosophical lyrics based on soul bearing life experiences that resonate with the audience. One of the band’s latest releases “Go to War” from The Stories We Tell Ourselves is a shining example. When describing the song’s meaning, Jonny said, “Trust is the foundation of every relationship. As trust erodes, our need for control grows. ‘Go to War’ is about how we circle the problem, unknowingly spinning the web tighter. If you circle enough, it becomes a spiral. If you spiral enough, it becomes a war.”

Bearing their soul on stage to a packed house in San Antonio the quartet did not disappoint the hometown crowd.

The setlist contained latest releases from Nothing More including “Let ‘em Burn”, “Do You Really Want It?”, “Go to War”, “Ripping Me Apart” together with many fan favourite songs from preceding albums such as “Christ Copyright”, “Mr. MTV”, “Jenny”, “This Is The Time (Ballast)” and “Salem (Burn the Witch)”.

With the European tour starting in less than two weeks and the second leg of the North American tour starting February 3, 2018 be sure to head over to NothingMore.net and find a tour date near you! Witness the Scorpion Tail in all its magnificence and absurdity for yourself!