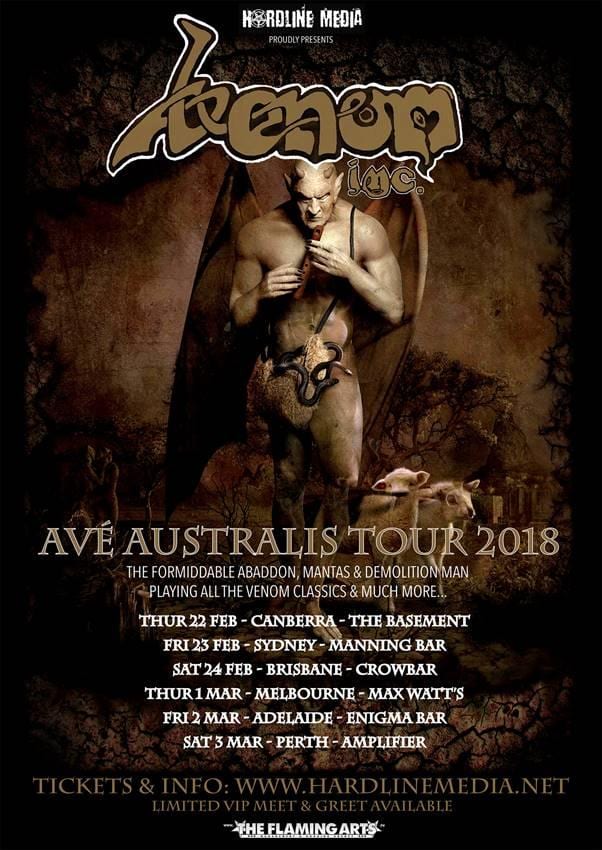 Venom Inc. FOR THE FIRST TIME IN AUSTRALIA! The formidable Abaddon, Mantas and Demolition Man descend on Aussie shores for their Avé Australis Tour in February 2018.

Formed as Venom in 1979 in Newcastle upon Tyne, England. And coming to prominence towards the end of the new wave of British heavy metal, Venom’s first two albums—Welcome to Hell (1981) and Black Metal (1982)—are considered a major influence on thrash metal and extreme metal in general. Venom’s second album proved influential enough that its title was used as the name of an extreme metal sub-genre: Black Metal.

During the 80’s, Venom were THE extreme band, releasing more classic albums such as At War With Satan, Possessed and countless classic, live albums, such as the Assault live album series and the legendary Eine Kleine Nachtmusik Double LP and the The Seventh Date of Hell: Live At Hammersmith Odeon Video which helped launch Metallica, who were the support band for Venom’s tour.

The current line-up of The Demolition Man, Abaddon and Mantas is now revered as the mighty Venom Inc. With brand new album Avé out now on Nuclear Blast Records, hear select tracks from this album, as well as all the early Venom classics live and for the first time in Australia!!!