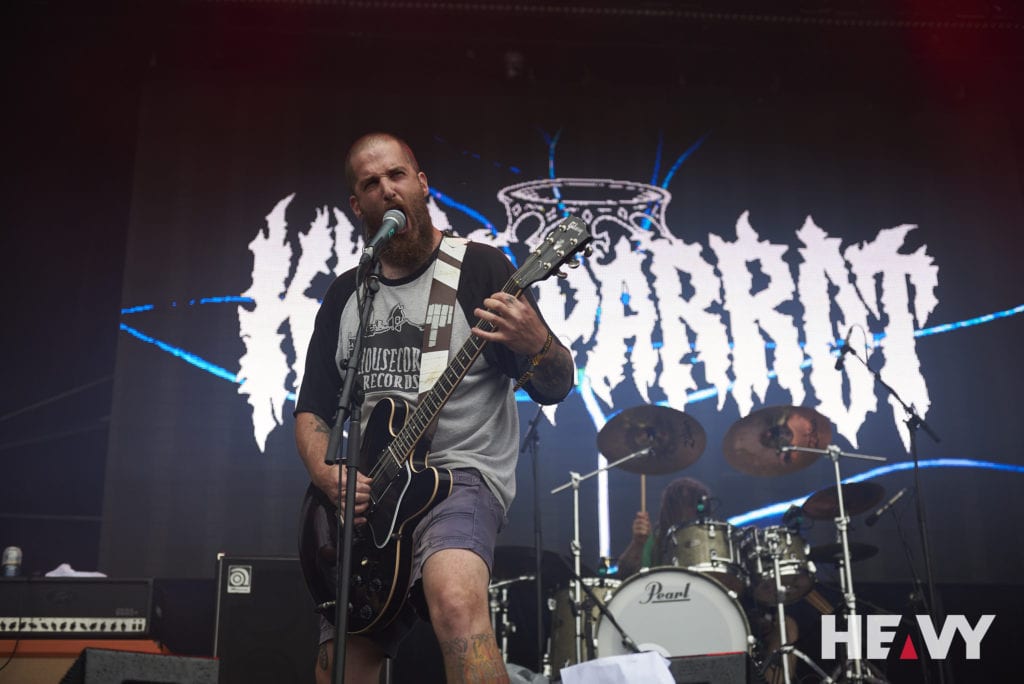 Regardless of one’s identity or one’s preparedness, at an outdoor music festival, everyone and anyone is vulnerable. It is an unfortunate scenario, but in turn, it also adds to the adventure and excitement of the event. Within minutes of the official opening to the grand gathering that is Unify, mother nature reared her ugly head, and the elements engulfed Tarwin Lower. Actress Ilka Chase certainly put it best when she said: “Among famous traitors of history one might mention the weather”. Besides the literal flood which attacked the festival and all those involved, the fans clearly undeterred flooded into the main arena and spirits undeniably remained high, but not necessarily dry.

Victoria’s Ocean Sleeper had the honour of opening the event, but it was far from a dream start, truthfully for the quartet, it was a nightmare (Congratulations if you picked up on the sleeping puns). The four-piece were able to get through almost two songs from their recently released EP Breaking Free and Hold On Stay With Me when electricity became non-existent. However, this was not taken as oppressive, more-so an opportunity. Even in the torrential rain and wild wind, the audience maintained the energy without Ocean Sleeper acting as their catalyst. Chants of Queen’s We Will Rock You and DJ Otzi’s Hey Baby! (If You’ll Be My Girl) elated the entirety of the festival and eventually the power returned and OS finished their set. Not necessarily a rain dance or chant, maybe a current chorus? Who cares, it worked.

Sydney’s Justice For The Damned provided the soundtrack for the ninja moshers instantly afterwards with their deathcore influenced metalcore. A far from the original recipe with obvious nods of influence from Emmure or Chelsea Grin; but the response to Deep Rotting Fear was beyond voracious, so it was abundantly clear the quintet are superlative in their niche.

Arguably the outfit with the toughest position on the entire festival, Brisbane’s Columbus was required to inject melody into what had been a predominantly metalcore show thus far. It was established very quickly though that this pop-punk trio were the men to do it, as the finesse of the musical transition, the three-piece executed this with was of a prodigious standard. Replace Me and Downsides Of Being Honest demanded attention which they thankfully received and honestly for this writer at least, Columbus have eased the pain of The Swellers’ hiatus to a remarkable effect.

The melodic intermission was undoubtedly brisk and like a bullet from the chamber Sydney’s Polaris exploded to mark their introduction and the festival’s return to the heavy music version of the event. Unfamiliar was a distinct fan favourite, and there is simply no denying this five piece’s impressive offensive in a live setting; distinguished would be an accurate description. Their similarity to the UK’s Architects is rather apparent to the point of being a younger-brother type scenario, but their presence is infectious, so it is an endearing pathway Polaris are undergoing.

Now was the time to administer some “putrid” into the “polish” that the festival had only contained to this point, enter the Kingstigators of unbelievable ugliness to an astounding platform, King Parrot. These Victorians were victorious in disturbing an unsuspecting audience, but like a rabies-infected bite, it was overwhelmingly contagious. The quintet’s grinding thrashin’ punk extreme musical amalgamation was a sense of maturity that had no heard yet, and if a visual metaphor could be placed on the performance, the best this scribe could conjure is a VB shower on a vegan festival. Matt Young as always was livid both on and off stage whether he was fully wearing his shorts or not and if highlights had to be mentioned BRIEFly, the Wall Of Death and Need No Saviour were it.

If King Parrot injected the shock into the festival, Canada’s Counterparts provided the solace. The band’s noughties inspired metalcore à la Misery Signals and Poison The Well restored windmill warriors back to their happy place, and hardcore enthusiasts shouted along with glee. Sinking, Stillborn, Witness, Compass and The Disconnect roused the biggest reactions and conclusively it is exhilarating to see Counterparts receiving the honour such as this for their passion.

Suddenly the conditions became comfortable as if premeditated the wind and rain subsided and a calm overtook Unify Gathering. Essentially this was the opportune time for a dose of “strange”. Enter the oddballs Ocean Grove from Melbourne and what an unforgettable crowd response this five-piece received; possibly the best of the entire festival. A band hellbent on “peculiar” presenting a combination of Wes Borland, Drowning Pool in 2001, hipster aesthetic, Hellions and Cheez TV; it has to be witnessed to be almost understood. It sounds otherworldly, but the enthusiasm the quintet received from their single These Boys Light Fires was out of this world.

If Ocean Grove brought the past to the present, Melbourne’s House Vs Hurricane brought the present back to the past (to a degree). As thr vocalist, Dan Casey shouted at the start of their set “Welcome to 2012” before the five-piece launched into 40 Deep and the audience happily welcomed HvH back into their world. Get Wrecked, Give It Up, Dead Lizard, Forfeiture and Haters Gonna Hate stimulated the crowd into a celebratory bliss and even though it was far from perfect, it was, without a doubt, memorable. This was of course accentuated by the announcement of guitarist’s Ryan McLerie’s engagement which occurred just minutes before HvH’s performance.

Continuing with the theme of Melbourne bands and rewinding the clocks, the endlessly adored quartet known as The Getaway Plan cast a spell and hypnotised the entirety of Tarwin Lower with their album Other Voices, Other Rooms being played in full. Unbelievably like Daniel Craig, TGP, this record and their performance of these songs just improves with age, and although this was a change of pace, it has become apparent that these anthems from 2008 are unforgettable.

If The Getaway Plan had provided the soulfully moving soundtrack, California’s letlive were ready to blast soul punk into every attendee present. The eruption of Renegade 86’ was equivalent to Haskins the Gremlin meeting his demise in the microwave from the 1984 “Gremlins” film; except for one major difference, it did not stop. Frontman Jason Aalon Butler was a man possessed bringing new meaning to the word “hyperactive” which he maintained at different heights during Another Offensive Song, Younger, That Fear Fever, Banshee, Muther (which Mr Butler movingly declared that “real manhood comes from women”) and Good Mourning America. If Letlive’s music wasn’t the art to impress, there was irrefutably an impression made with Jason climbing the stage ladder frames dozens of metres in the air or his crowd surf inside a wheelie bin. Unify had reached an impressive summit but arguably still not its peak, inconceivably more was still to be enjoyed.

If letlive set the event alive, then Buffalo’s Every Time I Die were responsible for killing it in the best way (figuratively speaking). What better soundtrack to initiate this assault than Underwater Bimbos From Outerspace? For nearly 20 years ETID has been destroying stages throughout the world, and the machine they have created is still burgeoning and shattering ETIDiots at an alarmingly beautiful rate. Decayin’ With The Boys, Glitches, Floater, We’rewolf and Map Change bewildered all, and the band’s authenticity left an undying impact which will be alluded to at this festival for years to come.

It had been a long, eventful, enjoyable and challenging day so of course, it made practical and perfect sense to close with UNFD’s darlings of progressive metalcore Northlane. Vocalist Marcus Bridge is nearly unrecognisable as the man he has become, his duty as Northlane’s frontman is now part of his biological build, he has become THEIR requirement. This is no easy feat as his tenure with the band is still stupidly one which sparks conflict; sincerely though he is a weapon of incontestable power and Rot showcased his supremacy in a poetic manner, this was further justified by the new song Intuition which sparked positive havoc from all who witnessed it.