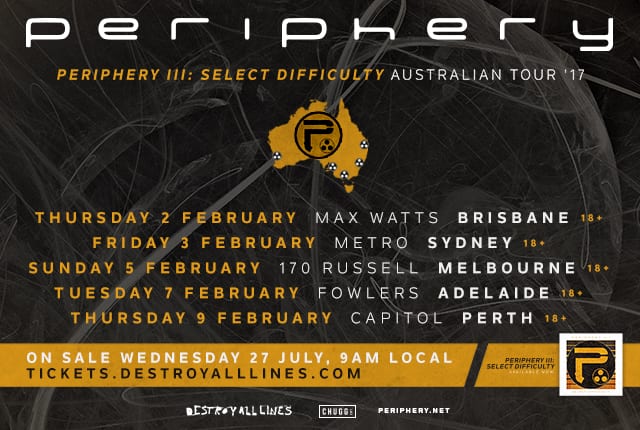 The djentlemen in Periphery are largely to thank for the explosion of the tech metal scene that has occurred over the past half-decade or so since their inception. Certainly they played an integral part in its popularisation and—seven years and five-and-a-half records later they’re arguably at the height of their powers.

Polaris opened things up to a thick and receptive crowd whose early turnout was especially surprising since Bring Me The Horizon and While She Sleeps were literally playing down the road. Having not been familiar with the Sydneysiders outside of checking out a few of their clips online when they got added to the tour and immediately dismissing them as one of ‘those’ metalcore bands, I wasn’t expecting too much. Boy was I proven wrong.

The five-piece might not have much in the way of an original sound—stepping into the role of the world’s foremost Architects clone. However, as imitations go, theirs is top notch. Their songs are flawlessly constructed and perfectly performed, with the band delivering a convincing set that brought visible grins to the faces of the early attendees.

The band’s frontman, Jamie Hails, is a natural showman. Even during the many moments when he let the rest of the band and clean vocalist Jake Steinhauser take over, it was impossible to keep your eyes off him. Yet never were the rest of the band’s performances anything less than flawless either. If ever there was a set by a band ready to step up to the major leagues, it was the one delivered by Polaris on Sunday night.

Local lads Circles fared less well in the immediate aftermath. Even though the band clearly threw themselves into the performance, much of their set came off fairly flat. Their set started without much in the way of fanfare and was persistently marred by technical troubles, such as the mic constantly cutting out and one of the guitars dropping out for the first couple of songs. As a result, the set never really gained any proper momentum, with only the debuting of a brand new track really garnering much of a reaction.

The Melbournians practice a distinctly more contemplative and low energy approach than their high-energy predecessors, and they were met with the response to match. Every crowd-member smiling and nodding along was offset by a surrounding sea of blank, indifferent stares, and when the band deployed a pair of beach balls during the final two numbers, they served to distract and hinder the performance, rather than accentuate it.

Periphery, on the other hand, maintained a ridiculously high-level enthusiasm throughout their hour and a half performance, whose energy was as infectious as it was impressive. Matt Halpern hits the drums as hard as anybody out there and modern guitar gods Misha Mansoor and Mark Holcomb spent the night running around the stage seemingly making sweet sonic love to each other. Add to that a charismatic and commanding performance from the masterful Spencer Sotello, whose vocals were both note-perfect and fiercely intimidating, and there’s a strong argument to be made that Periphery are among the most rewarding live acts in the game.

The set drew heavily from the band’s new record, ‘III: Select Difficulty’, with little of the band’s older material scattered in between. The tracks from ‘Select Difficulty’ never properly clicked with me on record. However, much of their inherent complexity and intelligent construction was revealed in the live setting and it was the newer tracks, perhaps more so than the older material that drew the biggest reaction from the crowd—particularly the record’s uplifting closer ‘Lune’, which likewise closed out the set to euphoric response.

Despite a virtually flawless performance—and perhaps in spite of it—there were a few minor gripes to be had. First, and most pertinent, was the campfire-style guitar interlude, which saw fellow seven-stringer Jake Bowen joining Mansoor and Holcomb for a mellow rendition of their Haunted Shores side-project track Memento. The segment was knowingly self-indulgent and the rowdy Melbourne crowd were right to heckle them throughout.

Less offensive, although perhaps more concerning, was the band’s reliance on backing tracks. A lot of bands use backing tracks these days to add in electronic elements and interludes. However, Periphery’s constant use of them in between songs and—with bassist Adam ‘Nolly’ Getgood having retired from touring at this point—to make up entirely 50% of the band’s prominent rhythm section, it got to be a bit much. Backing tracks were also used to supply extra sections here and there, which rather undermined Sotello’s holding the mic out for crowd participation. …Also, how do you write a song as good as ‘Heavy Heart’ and not play it?

Whatever. I’m nit picking. They were fucking incredible.

PrevPrevious.[LIVE REVIEW] Bring Me the Horizon + While She Sleeps + Hands Like Houses, Margaret Court Arena, 05/02/2017
Next.[ALBUM REVIEW] Blunt Shovel: Get in the GroundNext