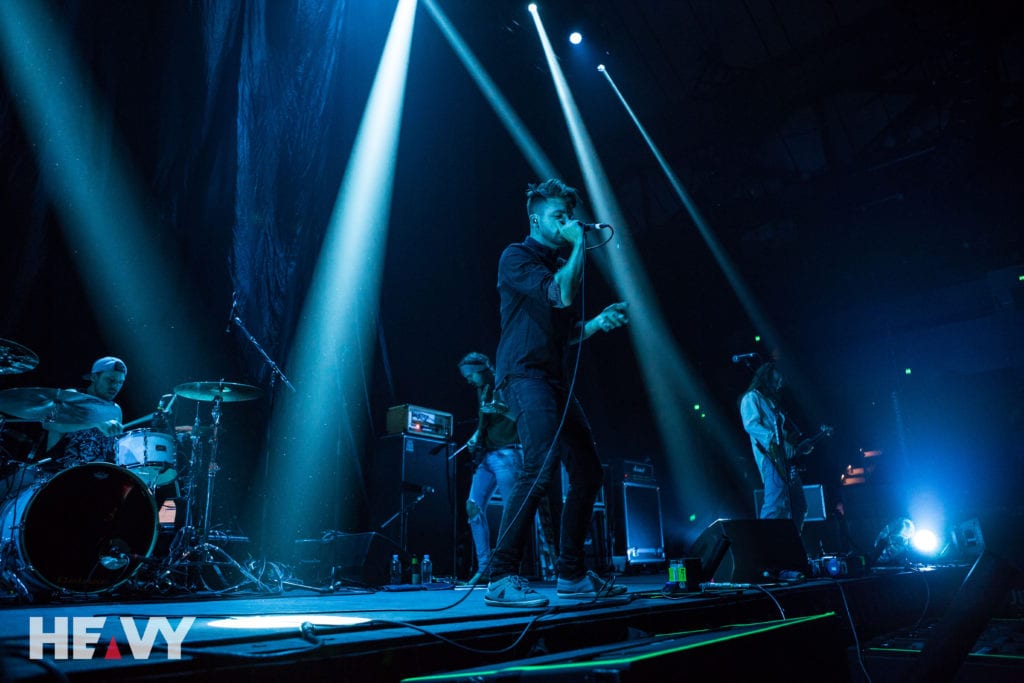 After a couple of months of waiting on vocalist Oli Sykes’ recovery from his viral throat infection, arena-metallers Bring Me the Horizon promised Melbourne and Adelaide that they would return to finish what they started in mid-late September. Joining them on the last remaining tour dates were Canberra-based quintet Hands Like Houses and While She Sleeps from Sheffield, England.

With Hands Like Houses getting one of their first dosages of arena shows, the band opened up to a good capacity with the majority of the mosh pit jumping to the heavy beat, thirty minutes after doors were open to the venue. Performing songs exclusively from their 2015 full-length “Dissonants”, Hands Like Houses received a heart-warming response from the audience, while announcing that they were very short on sleep. That being said, they still showed that they still had the energy to prove how enthusiastic they were to support one of the biggest acts in the heavy scene at the moment.

Coming back for the first shows since the Soundwave 2013 festival run, While She Sleeps blasted out a fistful of chaos and brawl within their forty minute timeslot, willingly. With their wild stage presence going off, While She Sleeps executed an array of tracks from their 2012 record “This Is the Six” to brand new material from their upcoming “You Are We” album that frontman Lawrence Taylor said would be coming out sometime this year. From wall of deaths to crowd jumping, While She Sleeps were able to orchestrate the patrons in any way they wanted them to in the pit with no trouble, whatsoever.

With Happy Song blaring out the very second they set foot onstage, Bring Me the Horizon got everyone in Margaret Court Arena participating in vocals, singing “S-P-I-R-I-T! Spirit! Let’s Hear It!” From there on, Bring Me the Horizon gave their followers a set list that consisted mainly of “Sempiternal” and their latest release “That’s the Spirit”, along with their iconic Chelsea Smile track from “Suicide Season”.

Having been away for a number of months in order to fix Sykes’ throat infection, the energy that the British septet implemented was thriving, optimistically. From tracks such as Go to Hell, For Heaven’s Sake to Avalanche, to Shadow Moses to Antivist, there was a ridiculous amount of crowd participation with singing the lyrics to each and every song. Despite Sykes’ screams being up to scratch, his cleans weren’t exactly on par with his more aggressive vocals. However, the rest of the group stayed in great synchronisation with each other.

After the performance of Throne, Bring Me the Horizon would later come back on for three more songs to execute from their latest LP, with True Friends, Oh No and Drown being the final components of the set. From there on, Bring Me’s gathering would use the remaining time of the gig preciously and gave their last amount of vitality into singing and moshing as much as they could. Having been critical of Bring Me the Horizon in the past, I eventually began to grow fond of their music as time flew by. But most specifically, after seeing them live for the very first time, it was a show like that that made me feel happy to now consider myself a fan of theirs.