[ALBUM REVIEW] Blunt Shovel: Get in the Ground 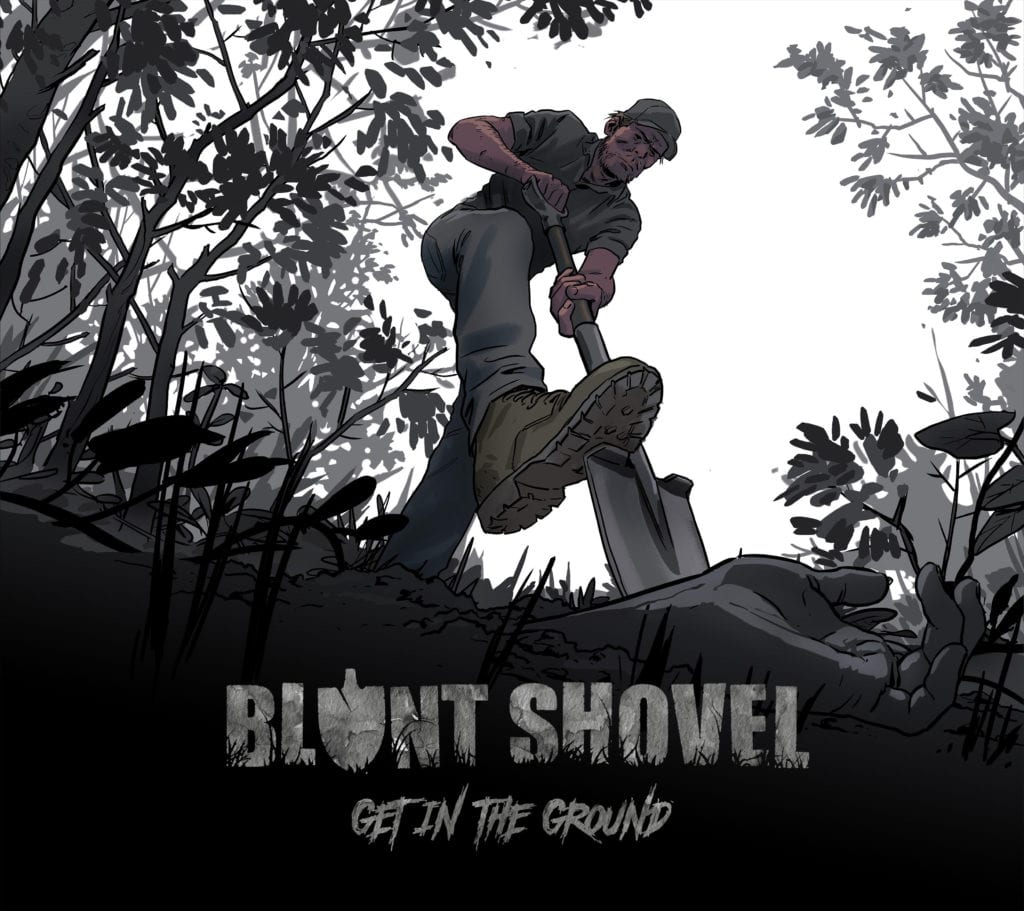 The mighty King Parrot immortalised the phrase ‘THE STENCH OF HARDCORE PUB THRASH’ on a tee shirt and now that term is being made incarnate by the mighty Blunt Shovel.

Holy fucking shitballs they just delivered an album that just reeks of heavy, straight up ‘Get Fucked’ riffage!

I’d seen a few of the sponsored promo’s and plugs on various metal pages, but when I got my hands and ears on this beauty, I was taken by surprise and didn’t expect the brilliant sonic outcome emanating from my speakers.

This was the first time I’d heard an official release out of ‘Goatsound’ Studios. Having followed many projects for many years thanks to the trusted and awesome human that is Fuller, his involvement in heavy music in our town and abroad there was never any doubt his craftsmanship was going to make Trent, Luke, Brett & Dave (collectively Blunt Shovel) sound killer and thanks to the expertise and mixing hands of Tye Pennington, polishing and glistening this final product then delivering made ‘Get in the Ground’ a sonically ‘FUCK OFF AWESOME’ debut album that all ‘SHOVESY’s‘ friends, fans and peers knew was in the bag.

‘Get in the Ground‘ is by no means a complex album, over thought and full of complexity that exists for the sake of wankery. No, my dear fellow readers and critics, this is head banging death/thrash played with tongues firmly placed in cheek and a passion that is as obvious as dogs balls from the opening radio sounding drum/guitar audio. Then twelve seconds in and the life breathed into ‘Get in the Ground’ is savage without question and a clear indication of what we can expect for the next 38 minutes. Trent’s screams, grunts and growls are like those of a dog possessed ready to tear us a new one, pure agro gold. Complimenting Trent’s vocals is that incredible guitar sound of Luke Walton which together meld like a slick and cohesive brotherhood creating this awesome and unifying attack that is near perfect and a pleasure to listen to. Add to that Brett & Dave’s pummelling bottom end attack which overall makes Blunt Shovel as beautifully simple as they are beautifully brutal. I also think that this is one of the reasons that ‘Get in the Ground’ will have a certain staying power and continued listenability. Nothing overwhelming and over thought but just great straight up thrash like it was meant to be played.

Fantastic song titles such as – ‘Destination Dog Food’, ‘Double Cannibal Shotgun’, and my personal fave ‘Sewer Pipe Throat’(Clearly about the trials and tribulations of a metal singer!) ‘Get in the Ground’ is as pummelling as it is uncontrived. Plus it is also four down to earth awesome Melbourne metal blokes with a common interest, coming together to write and record an album of Aussie pub ‘FRASH!

‘Get in the Ground’ is straight up, without apology and is as great as it is fucking heavy. I reckon from what I know of the lads in ‘SHOVESY’ that’s exactly the outcome they predicted.