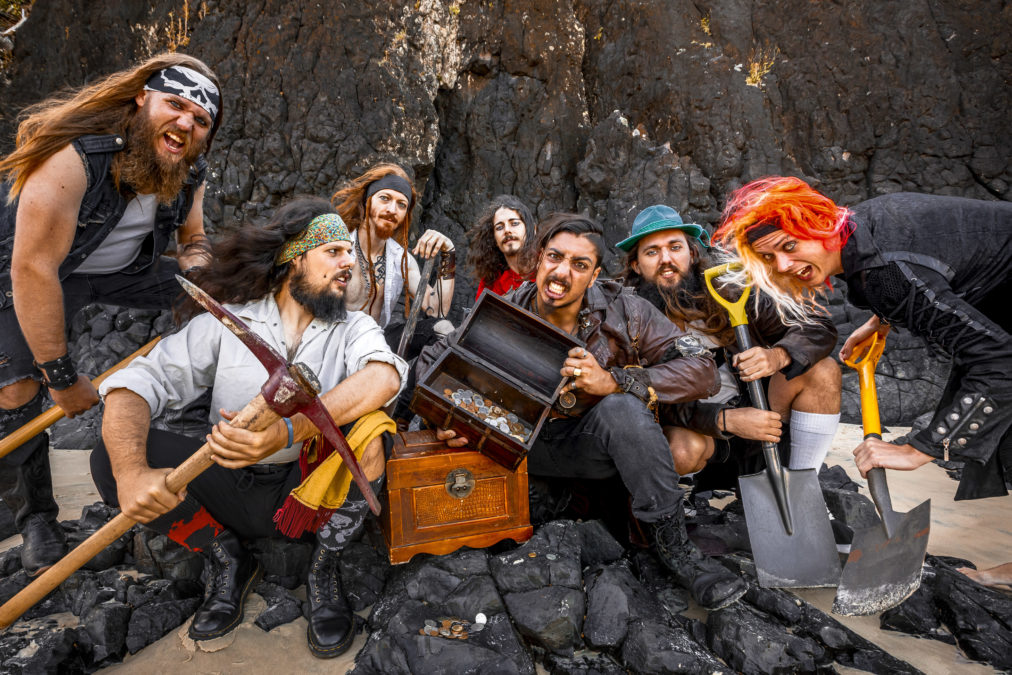 Lagerstein are a band with a massive reputation – especially in the live arena.

Since before I moved South from Cairns in 2016 people had been singing their praises and telling me that theirs was one live show I HAD to see.

Unfortunately, life and travel and kids have combined to impede this mission so it was with relief, a touch of trepidation and a sense of ‘I hope the hype hasn’t built them up to be more than they are’ that I gratefully accepted the chance to review the DVD of Lagerstein’s November 2019 performance at the Triffid in Brisbane.

Having seen many concerts at this great venue live I already had a sense of what this show SHOULD sound like but, from the outset, I was completely blown away by how promise quickly gave way to reality gave way to fact.

Due to a multitude of camera angles the massive expanse that once was stage but now transformed into a pirate ship became quickly evident as the band materialized decked top to bottom in their best pirating gear.

Even through the computer screen the band entered with an energy and vibrancy that was infectious and any doubts I had as to losing my metaphorical cherry via DVD was soon cast aside.

Opening with “Raise Your Steins” vocalist Captain Gregarrr commanded – and got – the full attention of the capacity crowd and so begun not just a musical journey through the seven seas but an entertaining frolic of lively tunes that oozed charisma and confidence from every corner of the stage.

By the time their second song “Slocken The Rum” kicked into gear Captain Gregarrr had almost decimated his once full alcohol chalice and the rest of the band were off in their own worlds ferociously bashing their instruments and engaging with their captives – I mean crowd – with reckless abandon.

Halfway through the song the tempo slowed considerably to a slow handclap before Captain Gregarrr allocated names to each assembled half of the crowd, using, of course, nautical terms like Starboard and Portside. Luckily I know enough about pirating to know what he meant but the beauty of watching from home is I could tell him to get fucked and stay precisely where I was while the rest of the crowd dutifully did as they were told.

For the uninitiated, Lagerstein play pirate rock/metal, utilizing an assortment of instruments ranging from your standard fare to violins, keyboards and keytars. In fact, the only rules they seem to abide by are those of the seven seas so when “Dig, Bury, Drink” ushered in a dualling guitar and violin solo I understood quite quickly (as if I didn’t already guess) that this was not going to be a conventional show.

When Lagerstein played “Shoey Song” the crowd obliged by removing their footwear and summoning forth whatever alcohol was flowing before pouring it into said smelly foot casing before drinking their own toe jam. I’ve never been a fan of the old shoey but that could possibly be because of a chemical imbalance I have in my feet that is not conducive to drinking…

Not only does Lagersteion consist of the members clearly visible on stage, but it seems they have a rotating list of mates/members that roll throughout the performance, each with their own role to play and each slightly more off-kilter than the last.

The first of which, Neil, went temporarily missing in action before taking his place on stage and ushering forth ‘The Neil Of Fortune’ which is exactly what it sounds like.

A giant prize wheel was wheeled on stage with a lucky punter being invited to spin for the chance to win prizes like a shoey, everybody drinks, a captains cocktail and a couple of other things that, surprisingly, seemed to promote the consumption of alcohol.

The grateful contestant won herself a beer bong which she finished like a champion before the props again gave way to the main cast and the music once again flowed almost as freely as the rum.

One thing I have not witnessed in my lifetime of concerts is a mosh pit to a violin but Lagerstein busted my cherry once more by achieving the previously thought impossible before another guest in the Party Parrot joined the band onstage for a song seemingly named directly after him.

The parrot was soon jettisoned in favour of a cocktail waitress bearing the forbidden fruit and when she joined Captain Gregarrr on vocals for “Pina Colada Paradise” I told myself nothing more Lagerstein could do would surprise me for the rest of the show.

Of course, I was proved wrong when Captain Gregarrr urged the crowd to sit down before he somehow maneuvered his way amongst a group towards centre stage before guitarist The Majestic Beast dusted off the acoustic guitar for a beautifully poignant rendition of “Drink ‘Til We Die”.

By the time the band had finished “Beer Bong Song” – you guessed it, complete with more on stage beer bongs – the band, the crowd, and even me in my comfy lounge chair were spent to a man but that didn’t stop Lagerstein returning for three encores, including their awesome version of Men At Work’s “Down Under”.

Lagerstein are most definitely a party band but they are also more than that.

They are a talented bunch of musicians that have found their niche and are unafraid to exploit it unashamedly.

Their music is rambunctious, fun, infectious and impossible to resist and my only regret after sitting through Live In Brisbane is that I have still yet to actually see them live in person.

I have a feeling that is about to change in the very near future.

Watch “Down Under” Live In Brisbane below:

PrevPrevious.MASSACRE Sign To Nuclear Blast
Next.HEAVY REGULAR “This Goes To 11”Next