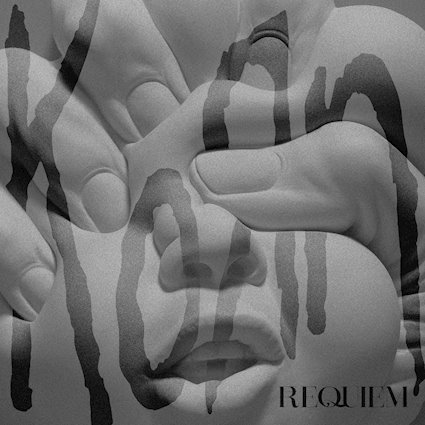 Love them or hate them, there’s no denying the impact Korn have had on the music world at large.

They redefined an entire genre of metal with their first two albums – Korn and Life Is Peachy – and over subsequent releases have refused to be tied down to the traditional sound known and loved by fans the world over, instead literally beating to the tune of their own drum.

With each album announcement comes the plea of legions of fans around the world for Korn to go back more to their core sound from the earlier albums, but each time the band has defiantly snubbed their noses at the cries of anguish and continued down the path they choose at that particular time.

On their most recent album, The Nothing, Korn showed glimpses of their old school mentality, enough so to hint at a possible trip back down memory lane on the upcoming Requiem, which is out on February 4.

From the swirling guitar and bass intro of album opener Forgotten, it seems that Korn have done just that.

The intensity and musical mayhem that punctuated Korn’s early records is there from the outset, with vocalist Jonathan Davis roaring into life and the cycle – for now – is complete.

Forgotten has all of the trademark Kornisms. Breakdowns, angst, sorrow, aggression and pain and fuck me isn’t it great to hear it again! The breakdown halfway through is enough to send shivers of anticipation down your spine for the next track, Let The Dark Do The Rest.

Starting with an eerily creepy assortment of sounds, Let The Dark Do The Rest soon spits into life, down tuned guitars once more ruling the playing field.

Davis soothes into the opening lines, his voice dripping with resentment and self loathing. The harsh vocals telling us “you make me sick” a welcome indictment because, if Davis is pissed off at you, then Korn is pissed off at you. By the time he screams those same words at you to end the song it is almost an accusation rather than a question and if this is what Korn sounds like when you’ve made them sick then take their booster shots off them now!

Start The Healing is up next, the sonic intensity building before Davis asks “Do you really wanna come with me” and the answer is an emphatic YES.

Korn are still pushing the musical boundaries so far on Requiem, but they are doing so while reflecting on their past, which is a great combination.

Start The Healing is a stuttering, sporadic tune that highlights the cleans of Davis without impacting the extremities of the music. Each breakdown is accentuated by a vocal delivery that become more anguished as the song progresses to its fiery conclusion.

Lost in the Grandeur starts with a bit of guitar scratching and some heavy tunings that repel each other in an unseen dual that shows Korn are back to their experimental best and, more importantly, loving it.

Davis seems to be admonishing himself in this track, questioning his own beliefs and nature, while the band continue to belittle his questions around him. The vocal breakdown around the two-minute mark while Fieldy twangs his bass lovingly leads into a period of discontent, with Davis becoming more aggressive with his appraisal and the guitars seemingly questioning his every thought.

Disconnect thunders to life with Munky and Head facing off in a guitar duel that soon gives way to a swirling maelstrom of activity that centres around another soft vocal delivery from Korn’s tortured frontman.

Although featuring more than its fair share of tempo and timing changes punctuated by slow and deliberate guitar riffs, Disconnect is definitely the slowest burner so far on Requiem, but saves itself from mediocrity due to the eclectic and unexpected musical interludes that define Korn’s sound.

Hopeless And Beaten is all guitars and chugginess as it tempers into a softly spoken Davis that invokes memories of the band’s early inner turmoil that defined their sound.

There is enough conflicting emotion in this song to draw you into Davis’ inner consciousness as it takes you on a rollercoaster of feelings that is swept along and nurtured by an unseen nemesis.

Most of Korn’s songs have always centred around feelings of loss, separation, self loathing, hatred and contempt and the fact that 14 albums in Davis still manages to engage you with his troubles is testament to the honesty in his lyrics.

Penance To Sorrow bounces to action, a momentary pause in proceedings to allow Davis to introduce another tale of woe the precursor to another step in both directions musically. On previous albums the divide between the musical direction wanted by Davis as opposed to the other four members has been obvious and noticeable, but on Requiem it seems they are finally on the same page, which is evident in the quality of the songs.

My Confession has that beautiful familiar feel to it, Munky and Head feeding off Fieldy’s indecision and laying the platform for adventure through Korn’s entire back catalogue, taking the best pieces from the band’s DNA and splicing them together to encapsulate the past, present and future of a band who will go down in heavy metal history.

Worst Is On Its Way threatens a dull conclusion to Requiem, but as the musical pieces evolve into a swirling energy of down tuned chaos and musical disparity, it becomes obvious the song title means nothing in the way of the actual song.

The down tuned intensity of the guitars combined with sporadic solos and unbalanced notes are early standouts, but when Davis starts his customary vocal rap rumblings you feel as though Korn have saved the best for last, and, possibly, an early insight into the next phase of their musical journey.

Requiem is one of the best albums Korn has released since forever and should finally appease old school fans who loath change.

It is a step backwards sonically, but also a reflection of just how far Korn have come.

As only Korn could.