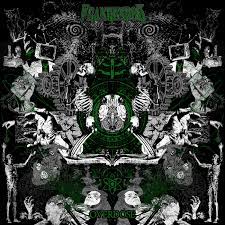 If you haven’t heard Frankenbok yet, it’s probably time you pulled your head out of the fucking sand and wrap your earholes around their latest release, Overdose. That’s my plan for now anyway, and I’m about to tell you all what I fucking think about it, as I do, and as I will.

Now, I know you’ve all been busy researching flat earth conspiracies and trying to keep up with your Covid booster appointment roster, but surely, you’ve seen the video for Rolling Dice On Dirty Streets pop up on YouTube somewhere in between Joe Rogan podcasts and United Australian party adverts. No?

Well, best you check it out because it’s a banging tune, and it’s the first official single release from the album.

The song kicks off as a bit of a thrasher before pulling back into a broken funk style heavy groove. Rinse and repeat, add some heavy jazz fusion elements, and you’ve got a cracking catchy tune. They do heavy good, these guys, real good!

War of Attrition rocks straight in and demands your attention. The verses deliver a sound not too unfamiliar to that ever so hated genre of the early 2000s. Don’t get ya tits in a tangle too early though because the song builds up to return to a heavier groove with elements of heavy punk, metalcore and groove metal.

Confidence Man, anyone remember that shit band from Byron Blues Fest years ago? Probably not, because I don’t think too many readers of this mag would have anything to do with dirty hippy shit. And I’m sure you’re all still wishing someone would bring back Soundwave, or at least the Big Day Out.

Anyway, that whole paragraph had fuck all to do with anything, and especially not the thumping drums and heavy grooves which flow all the way through the track of the same name as that shit techno/disco band from that shitty festival. It’s a killer track, which peaks in its last minutes with a guitar lead that pulls the heavy grooves all back into line to end the song with a dab of melody.

The following track Our Last Breath is a straight-up heavy punk banger, real heavy. You’d almost expect this track to bail out after about a minute and half, like every punk song ever, but the band just keeps trashing it out at full pace. Fuck yeah, oi oi cunt!

A slow, almost doom metal sounding intro to Too Many Trips builds up before breaking into some goddam heavy groove. Syncopated but broken drum, bass and guitar grooves open up to allow the vocals to jump in and out in between the stabs of chunk. Oh yeah, and then a dirty bass groove inserts itself like a Rapid Antigen Test and tickles ya right in the thinker.

Alright, it’s time for some thrash, and The User actually delivers, unlike every second truck driver in the country right now. There’s not really too much to say about this track, it kinda speaks for itself. It’s classic thrash with a modern twist, and it touches on the edges of metalcore for moments here and there. Yeah, this is a pretty good one, aye.

Heart With Fire opens with my favourite riff so far. A riff that builds in and out on itself with a series of heavy and groovy twists and turns. And there’s that dirty bass again with some guitar noodling for a touch of added flavour. And in another twist of events, the band drops some hardcore on us, followed by some more thumping groove and manic riffing.

I’d hate to say it, but track 8 The Power Process has some death core vibes to it. Difference is, though, it’s good. Probably the heaviest track so far, not the fastest, but the relentless double kicks are like a constant roll of thunder beneath the continuous brutal onslaught.

At track 9 it’s almost time for a durry, or maybe that’s just the next track titled Lady Nicotine reminding me of my filthy habit. Yeah, fucking oath it is, reminding me she’s sucking the life out of me and stealing my breath away. It’s an unusual track with shifting rhythms and grooves interlaced with quick lead licks and trills. I’ll need another listen to get my head around this one, and a read of the lyrics, which might help me quit the death sticks … again.

Sounds like it’s time for some sludge metal, well kinda. At least that’s how Black Iron Prison kicks off. It gets a little more melodic through its verses than the average sludge droner, but returns to the formula throughout the choruses with long-drawn-out vocals and blues driven riffs. That dirty bass we’ve heard a few times through the album pokes its head out again to my pleasure, but to my displeasure it signals the end of the track, and the album.

This album sounds like a band that isn’t afraid to just do what they do and try whatever the fuck they wanna try. It displays zero regard for metal elitist fucktards that pride themselves on knowing more underground Norwegian black metal bands than the 40-year-old virgin that’s still living life to his fullest in his mum’s basement.

I guess a quarter of a century at the top of your game will give you that confidence, though. And Frankenbok, or should I say the Mighty Bok, have been there all that time. And with this new album, they have proven that they are still there, and are still a heavy force to be reckoned with.

Now, if the filthy Rona could just fuck right off and someone could just organise another heavy music festival, we can hopefully get these guys on tour with a shit tonne of the other amazing metal bands in this country right now.

Can someone please get the Bok guys to talk to our guys, and some festival guys, and organise this shit.