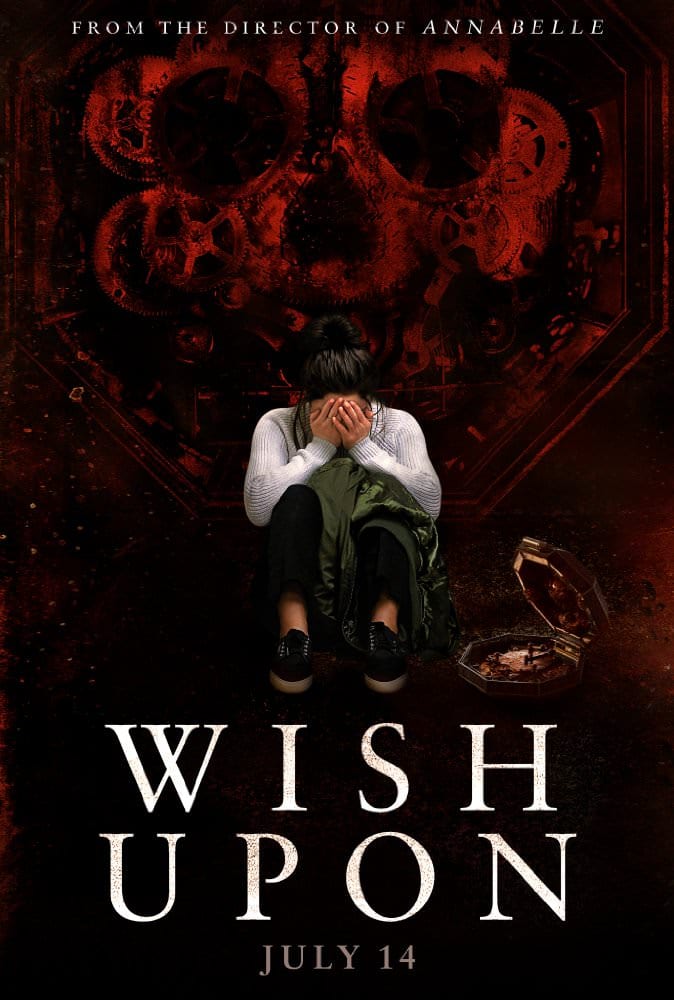 Cinema fans, prepare to be afraid – very, very afraid. When director John R. Leonetti delivered his film Annabelle in 2014, it freaked even some of the most hardened film lovers to the core… and yes, it made us feel very wary of any dolls that might have been laying around the house.

When people think of modern day horror legends, names like James Wan and Rob Zombie are always mentioned, but perhaps Leonetti’s names should also be added to that list. Not only was he the director of Annabelle but he also worked as a cinematographer on films like Piranha 3D, the Insidious franchise, and The Conjuring.

Now Leonetti returns with his latest horror, Wish Upon, a film that sees a young girl receive a box that allows her seven wishes. But as she starts to use the wishes for her own personal gain, bad things start to happen. The film marks the return to the big screen for Ryan Phillippe, an actor who became a heartthrob in the 1990s when he was the star of films like Cruel Intentions, 54, and I Know What You Did Last Summer.

Phillippe says despite appearing in one of the most iconic horror films of all time before now appearing in Wish Upon, he was someone that was always afraid of horror movies when he was younger. “As a kid, I was always scared of scary movies,” he says. “I didn’t want to watch things like Friday The 13th like all my friends did, but as I’ve gotten older, I enjoy a good scare. And I especially enjoy this kind of scary movie where it’s not just some slasher; it’s a mystery with a bit of comedy in there, as well. It reminds me of some of those movies that were around when I came up: films like I Know What You Did Last Summer that I was in; films like Scream. It has a sense of humour, and there are really obvious moments of real jump scares and danger, but there is also humour and humanity to it. So I like those types, you know?”

There was very little convincing Phillippe to do the film because he was captured from the moment he started reading the script. “I just started reading the thing, and I just found myself so caught up in it. I was enjoying the story and the characters so much, and then there was that nostalgic reference to those films that I mentioned earlier. It reminded me of those films, and I thought that it would be fun as an adult to play a parent or an adult in a movie that was like the ones that I started my career with. I thought the horror fans might find a good deal of fun with that, and that was that, yeah.”

Phillippe’s character is also responsible for the box coming into play into the first place. “She (Clare – Joey King) ends up with the box because I’m going through the trash with my buddy, Carl and we find this really ornate box with Chinese writing on it, and I decided to give it to her as an early birthday gift; not knowing what it is, obviously. Soon after that, she starts to discover the power that it has and she kind of gets addicted to that. Even after she starts to work out that there might be some evil attached to that, it is hard for her to quit because she is getting so much gratification out of the wish fulfilment and lessons that are learned.”

Part of Phillippe’s enjoyment working on the film came from the fact that Joey King, who most people would know from The Conjuring and Independence Day: Resurrection, played his daughter. “It has been an absolute dream working on this film – I love this kid,” he says completely content. “I think she is so talented; I think she is such a bright light. The effect that she has on everybody – the cast and the crew – her sense of humour is great every single day, and her attitude and her commitment. You know, it is not always the case when somebody starts as a child actor but there is something very normal about her, and then she has this exceptional talent. And she and I just clicked and bonded immediately, right away. Her mother and I all watched the Golden Globes together, we were cracking jokes together, and she reminds me of my own daughter in some ways – with her sense of humour and the way that we connect. I just can’t say enough about her. I think she is wonderful. And I can’t wait to see where her career goes. I think this film, in particular, is the very beginning of what she has yet to accomplish.”

The other big plus for Phillippe working on this film was getting to work with director, John R. Leonetti. “John has such a personality and a spirit and a truthful kind of love of what he is doing and the involvement of each and every person on the cast and crew. I think of him also coming from being a D.P., and I think now as a director he has a different understanding of the crew, which is really nice. He is also the kind of guy that you can’t wait to see every day when you are coming to work, and that’s a great feeling. And, to be honest, I feel like that about most of the cast and the crew on this and I’ve done now… this is my 35th movie, I think, that I’ve been in, and I can tell you that they aren’t all like that. So John has instantly found a special place in my heart that will stay there for a very long time. I know that I will stay friends with him, and I hope that one day we will be able to work together again.”

Wish Upon will be released in Australian cinemas on the 20th July.