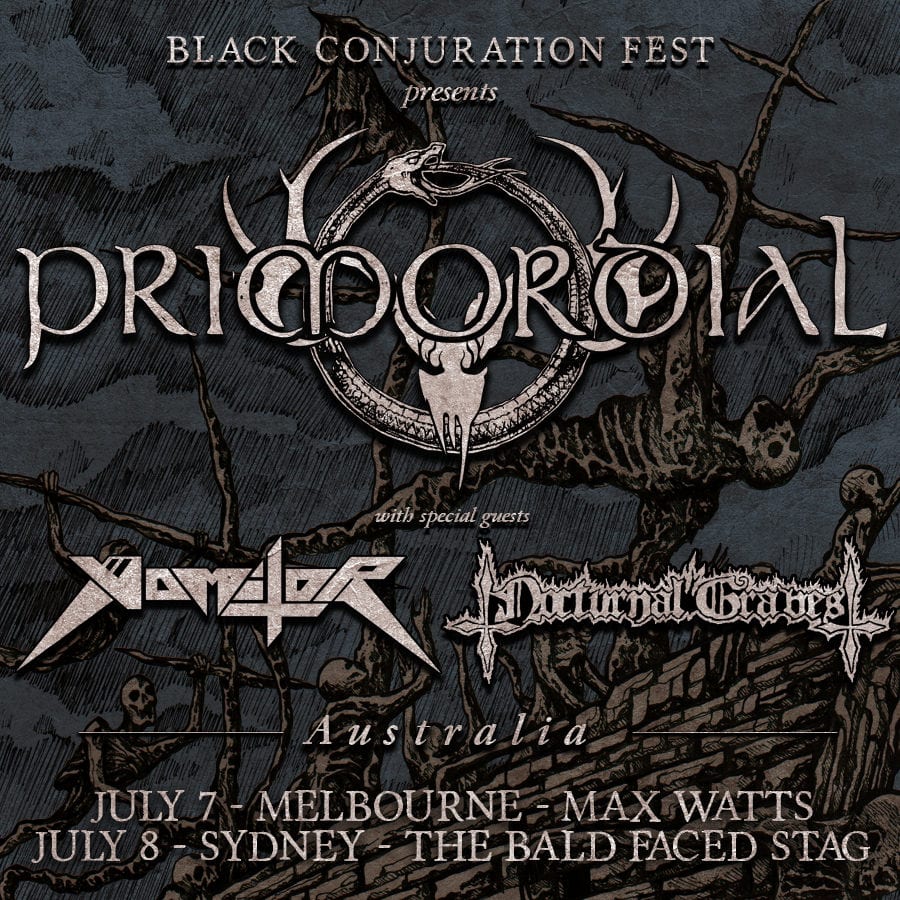 “Geography and economics I guess are the main reasons,” explained Primordial vocalist Alan ‘Nemtheanga’ Averill when asked why the band is only making their first visit to Australia this weekend. “We sit in a strange position. We aren’t what you could call a ‘kult’ band with a K so there hasn’t been some die hard underground maniac willing to borrow beg and steal to get us here and on the other hand we aren’t quite big enough to make the mainstream people proper money is how I might look at it. It’s just one of those things. We have some of the same problems trying to get to South America at the moment. But here we are…”

After nearly three decades leading the Irish black metal revolution, Primordial are here for two showcase events in Melbourne and Sydney, and while Averill insists they would like to play more shows, he concedes it just isn’t viable at this juncture.

“Again, if only Primordial were a professional unit,” Averill sighed, “but we aren’t. It may come as a surprise to hear that some people have work, kids, everyday responsibilities so the prospect of, for example, taking a week to play three shows even and see some of the countries isn’t possible for some of the guys as we have to keep days for proper earners in Europe over the coming year. Unfortunately, that’s the way it is. We’d have liked to add a few more – who knows if they go well it might be possible but the truth is adding another might have added another 2/3 days on to our schedule.”

One bonus about never having toured here is that fans don’t know what to expect, but Averill shrugs that off with a smile.
“I think we have enough DVDs and bonus discs with albums and YouTube that nothing is entirely virgin territory anymore,” he laughed. “People can expect a long and varied set. Blood and thunder. What else?”

Although Primordial are considered pioneers in the field of black metal in Ireland, Averill remains humble when quizzed on the band’s contribution to the genre.

“I don’t think we introduced it,” he said modestly. “There were black metal people here, a handful. It just so happened three of us ended up in Primordial together. I don’t think it was harder for us than any of the other bands. Dublin was a rough semi second world city, and the band was our way out of that. There were no rehearsal rooms, we had no money and crappy instruments, but we made it work, necessity is the mother of invention.”

As such Averill says that the band didn’t really have a vision when they started, more an idea of creating something which was a reflection of where they wanted their lives to proceed.

“We just wanted to make an album, to be honest, and plant our flag in the underground,” he recalled. “We didn’t have huge ambitions, maybe a tour of Europe at some time and making it on to vinyl. Then it just kept going, and here we are. It’s obvious we came from the second wave of black metal but we didn’t want to be orthodox about that as we weren’t strictly ‘religious’ or esoteric, of course, we had elements of that, but I suppose Pagan black metal was really what it is… or heathen black metal.”

As well as drawing early influences from some of the bigger black metal bands at the time, Primordial also encompassed Norweigan and Greek sounds into the mix to create something both fresh and unique, and which remains the cornerstone of their music to this day.

“In the beginning, it was Bathory, Celtic Frost, Sabbat, Venom, Candle Mass and the early black and death metal underground scenes,’ he reflected, “not specifically Norwegian and Greek but just the energy of the time, tape trading and making fanzines. Of course also Black Sabbath, Maiden, Metallica, Slayer etc. as well. Over time we added some elements of Irish traditional music and other influences, soundtrack, ambient and no wave, goth etc.”

When Primordial unleashed their debut album Imrana in 1995 the blending of metal with traditional instruments was relatively untried, but surprisingly there was little or no backlash from musical purists.

“No, not really,” Averill recounted. “There was a movement of bands behind the black metal scene, bubbling underneath who were taking from that scene and adding elements of their own culture to the sound, lyrics, outlook and aesthetic; bands like Hades, Enslaved, Einherjer, Graveland, Negura Bunget, Kawir, Thyrfing, Det Hedenske Folk, Gods Tower, Tumulus, etc. I’m sure I am forgetting some but they were around. We weren’t the only ones doing it.”
Thirty years is a long time in music, but according to Averill Primordial are still extremely proud of their debut offering and says that musically the band hasn’t deviated much from their original path.

“Honestly I’m not one of those guys who will tell you the first album sucks,” he stated. “It doesn’t. It’s rough and a tiny bit naive in places but we were young, and it has its charm. They all capture us at a point in our development as people and as musicians. I wouldn’t change a thing. I think you can hear it’s the same band.”
Primordial’s last studio album was 2014’s Where Greater Men Have Fallen, and Averill excitedly reveals that work has begun on the follow-up.”We are past the process of talking about talking and have begun to stand in a room together arguing about riffs,” he enthused, “so it is happening after the summer it looks like. It was late 2014 after

“We are past the process of talking about talking and have begun to stand in a room together arguing about riffs,” he enthused, “so it is happening after the summer it looks like. It was late 2014 after all! Time moves slowly in Primordial land. I don’t know what direction it is going to take, its early days but it seems to me the consensus is to have a rougher, rawer, more dynamic album with more cinematic quiet moments between. Side step a little bit into something a bit more jam like, but we shall see. There are ideas…”