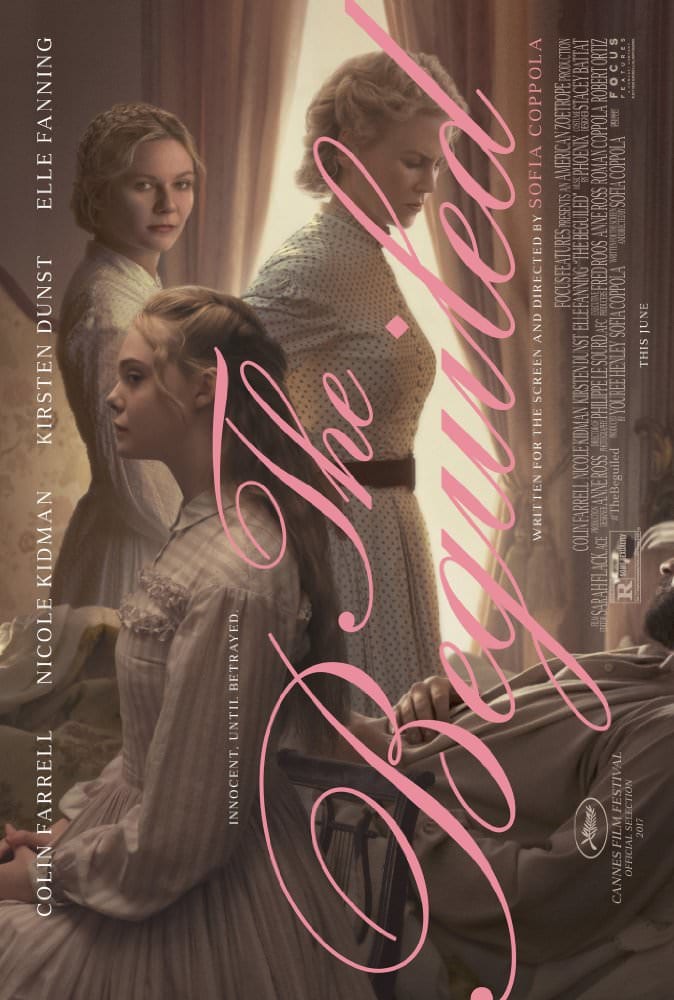 Sofia Coppola has to be one of the most under-stated directors in modern cinema. She rarely receives the praise that she deserves despite the fact she has directed some of the most interesting films of the modern era – films like The Virgin Suicides, Lost In Translation, The Bling Ring, and Marie Antoinette. Only the most hardened cinema lover would even realise that she is an Oscar winner – she won a Best Screenwriter gong back in 2004 for Lost In Translation, a film that she also received a Best Director nomination for.

Flash-forward to 2017, and now Coppola is back with her new film, The Beguiled, a film that is based on the best-selling novel by Thomas Cullinan and sees Coppola reunited with Kirsten Dunst, an actress that Coppola has already worked with on films such as The Virgin Suicides and Marie Antoinette.

Dunst says there was no surprises for her when she picked up the script for The Beguiled as it was already a story that she knew very well. “I was familiar with the story already,” she says. “I just really needed to give Edwina a big inner life, because there are so many scenes where we are all together. So it is important to get all those little looks and exchanges happening – that deep under layer that is happening, but not always spoken. Edwina is pretty reserved, so I had to fill in a lot of her emotional life. I feel that most of her backstory is in the script: she came from a wealthy family, and now she is kind of stuck there because of the Civil War. She’s under Miss Martha’s thumb, and she wants to get out of there. When McBurney (played by Colin Farrell) comes in then, that is a way for her to escape. To prepare for the film, we did etiquette classes and we had to learn how to do things like wrap a tourniquet – yeah, we did etiquette and what else did we do? Oh yeah, we made breakfast together, and we learnt dancing together; we improvised so that all the girls would feel comfortable together. I was their teacher, and they were in their place. Yeah, it was just to create a bond all together.”

Even the films setting is something that flows throughout the entire film, and Dunst is only too happy to talk about it in great detail. “The Seminary is a place for young women,” she says. “I am a teacher there, but Miss Martha is the head of the school and the household. I am also the girl’s minder, and now that the war is going on, I also have to become their mother in a way… I’m pretty much their caretaker.”

And while Colin Farrell plays McBurney plays her love interest, not everything runs smooth from the onset. “When McBurey first arrives, I have a bit of an aversion,” Dunst says laughing. “He is the enemy and that is scary. You know, yes, it is very uncomfortable for Edwina, but he slowly charms us all. He seems like a very sweet, kind soul, and it helps that he is Irish; that makes it a little bit more removed in a way, and yeah, he charms us. I actually really liked the scene with Colin where I have the first conversation with him. A lot of scenes have this campiness to them sometimes, just because of the subject matter and the way that Edwina reacts. She always seems flustered whenever he says something to her or touches her, it was fun to play, but it was so opposite to the way I am. It is a lot of fun to play somebody that has a younger mind and a vulnerability about herself.”

When asked to describe the film, Dunst thinks for a second and then says, “This movie is a Southern-Gothic film, and I would say that it is like an under-boiling kind of thing. It’s not horror, but it feels like it has horror elements and it is a slow burn, but it really gets intense. It’s about being trapped, but then an explosion happens in the house.”

When it comes to talking about her experiences working with Sofia Coppola as a director, Dunst is full of praise. “A set of Sofia’s is always very comfortable,” she says, smiling. “Everybody is so calm and everybody is there because they want to be there. She always seems to put together good energies with people and cast members, and I think because of that her visions just naturally come to life. She doesn’t second-guess herself and she trusts her actors. Now that I have known her for so long, it feels like I am working with a friend… you can’t really beat that.”

The Beguiled will be released in Australian cinemas on the 13th July.