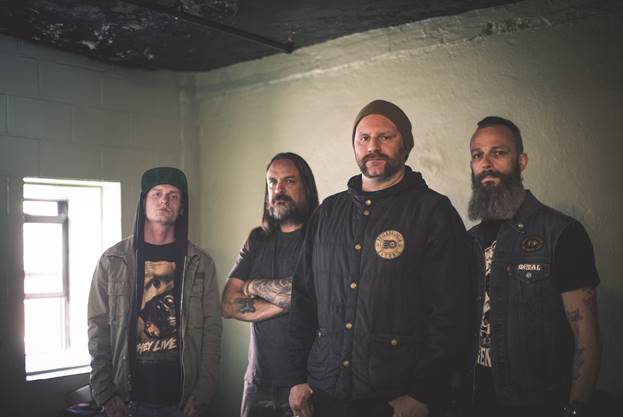 For the past fifteen years, Alaska’s 36 Crazyfists have been both a seminal and rare band that has remained pure and true to their roots: never ever compromising or giving up who they are and what they represent to the heavy music community. From the very moment I heard Bitterness the Star“, I knew that this band were something beyond special; never realising with any foresight or clarity how important they would be to me personally and the metal community as a whole.

It is clear, not only from being a fan, but as a reviewer and someone who tries to give insight into what is merely okay and not really worth purchasing, to writing about and airing something that contains so much beauty, purity and unapologetic passion with heartfelt aggression and drive that when we hear something so profound and special we take notice.

36 Crazyfists are one of those rare bands for me. I’ve bought all previous six albums upon their release and now leading up to this eagerly anticipated release number seven I can’t wait to own the new vinyl, Lanterns.

I have been privileged enough to hear it early, and what a magnificent album it is. Beautifully brutal. Delivered with a rare heartfelt heavy passion and that voice of Brocks. Oh, that voice! And it is an absolute privilege and honour to be speaking with that man right now, Mr Brock Lindow: vocalist, frontman and all-round amazing human from 36 Crazyfists.

“Oh man, thanks so much for those kind words. Those are quite the humble and kind words to listen to whilst you’re waiting to talk, so thank you!”

As I said, I have been a fan since the incredibly important and seminal debut on Roadrunner Records in 2002, Bitterness the Star. That album has aged so magnificently and still holds its own in a world where ungrateful consumers and the download crowd are spoilt for choice and quickly wipe their bums with garbage and move on to the next new thing. Tell us how have you managed to remain so grounded and focussed throughout your fifteen-year career?

“We are extremely grateful, and you mentioned fifteen years, but actually, 36 Crazyfists has been around for nearly twenty-three years. So right now, 36 Crazyfists is beyond a band at this point and it is more like a family and a brotherhood that has had the opportunity to see the world and tour because of what we do. That is not something that we take lightly because we have been lucky that we have been one of the only bands to get out of Anchorage, Alaska. Being able to sit here in a dressing room on tour and doing interviews with gentlemen like yourself and talk about what we do puts it all in perspective, and it is something that I am very grateful to still be doing.”

One thing that I have noticed and love about 36 Crazyfists, and also importantly, is that, as a band, they have never sacrificed their style and sound! You are clearly unapologetic and are a voice that refuses to follow a trend and look to what every other band are doing, and that is a rare thing. But what I have noticed on this album, Lanterns, much to my delight is, as I get older, I get angrier and therefore want my music to replicate my personality. The new album absolutely does that. It is clear that both yourself and the rest of the band are angry men with a fire and desire in their hearts and souls. I wondered if that’s the feeling Lindow had going into the writing of Lanterns?

“Yes! For me personally, my job in the band is writing the lyrics and the melodies and all the details that go with being the voice. This was a time vault for me that was a very messy chapter of my life and I was just trudging through the mud, but the only way to get through those things is continue to go through them and make sure that you don’t band-aid anything and the boys in the band are a pretty good at delivering the backdrop for me that compliments whatever it is that I seem to be going through at the time.

“I was definitely going through a million different emotions at the time of writing this album: embarrassment, being ashamed, being angry, being sad and dealing with my own depression and anxieties. What I really learned from going through all that was how important it is to have your support group and being able to lean on your family and your best friends and being able to have those hard and important discussions and that when you allow yourself to do that instead of keeping things bottled up inside, because the outcome of that we know what happens things tend to reveal themselves in ways we don’t want them to, especially if you have any substance abuse issues or anything of that nature. I just learnt how important that (the band) was to bare it all no matter how vulnerable or naked it leaves you, that it is important to go through those feelings and then get as much of it out and that it is pretty cathartic and that we’ll win these mental and eventually get away from them.

“Being the vocalist in a band gives you the opportunity to bare your soul to somebody, and you don’t care who is watching or listening but there’s just the hope that you can vent a little and release anything that is held inside your soul with the hope you and they will become a better person?

“It is so good to be able to express those things to someone who would never judge you and just has a listening ear that also would never just sit and say, ‘Oh yeah, I know exactly what you’re going through!” and brush me off. And I feel like I have been like that for my friends at various times in both of our lives and I am always grateful that I can be that person.”

When talking to my best friend about the interview, I mentioned how excited I was to be given the opportunity to speak to Brock, and I’d said that 36 Crazyfists could easily – and without question – been one of the very first ‘core’ bands (back in 2002). Both the band and more clearly Lindow’s vocals were something new, fresh and unheard. What is it that drives you and what the band does artistically?

“One thing that I am incredibly proud of is that we don’t sound like every other band. Love us or hate us, and there are plenty of both, my voice – especially the clean singing vocals – tends to be something that makes us stand out from the average hard rock/metal band; so, that I am really proud of. I think that it is really important to find your uniqueness and your signature sound or signature move. I don’t know what it is consciously that makes us ‘us’ because I am so close to it, but what I do know is, from all the conversations that I have had over the years regarding our band, is that somehow we have always been able to do something a little different and been flirting with a few different subgenre’s with our music. We have made it known that when you hear one of our songs you know it’s us and not any number of bands we love.”

I had the privilege of seeing 36 Crazyfists for the first time at Soundwave in 2009, and as expected, it was amazing but far too short a set. I asked whether Lindow could see the band coming over here in the not too distant future for a headline tour?

“Absolutely! We have actually just recently had discussions with our management and our booking agent, so we hopefully will get down there in February or March of 2018. There are definitely some dates being worked on right now.”

If nothing else, what is it you would love most for your fans to take from by listening to Lanterns?

“What I learnt from it is what we spoke about earlier and that is the power of leaning on the people that love you and that when you are in your dark moments and trudging through the mud, that you definitely find someone to talk to because it is definitely dangerous and not fun to keep those feelings inside, so find that one person or that one tool to get you out of that state and be able to get back to putting one foot in front of the other.”

“Ultimately, what I learnt is that people need people and that is what I discovered going through my own dark times. So what I hope for is that my music affects people positively.”

The amazing new album, Lanterns, courtesy of 36 Crazyfists is out now via Spinefarm Records.