To be plain-spoken, abrupt and straightforward: Life is hard. For the majority of the population, there are challenges which present themselves to people, quite often unfairly, which are so frequent it would be near impossible to put a mathematical equation or time numeracy to their reccurence. In the face of these obstacles though comes motivation and some of the most inspirational achievements, especially in the world of artistic creativity, has arisen from desolate situations. As Austrian philosopher Robert Musil put quite poetically: “Don’t you know that every perfect life would mean the end of art?”.

Vocalist of Californian emotional hardcore outfit Touché Amoré Jeremy Bolm experienced torment in 2014 to a devastating magnitude with the loss of his mother to cancer. The band’s fourth album entitled Stage Four, named after both the highest stage of cancer and the outfit’s fourth full-length, acts understandably as a testimonial to Mrs. Bolm and a form of therapeutic artistic release for Jeremy. In the state of reflection and having to perform these heartfelt and highly emotional songs for the public, Jeremy Bolm reveals that the therapeutic and emotional substance involved is not as influential as one would think.

“It changes every night honestly. I would be lying, if I didn’t say that I have become a bit numb to it.” He admits – “When you sing the songs every night, you get into a rhythm of things because of the repetitiveness. What actually gets a rise from me when we play these songs are the crowd members’ reactions. That and maybe something that occurred that day before the show which was at the forefront of my mind might trigger some feelings which might have been a bit suppressed. But, it changes every night and sometimes it’s therapeutic and others it really is NOT. Overall it is helping more than it is hurting, which is more than I could hope for.”

Understandably it is a topic that Jeremy is slightly hesitant to examine in great detail, however discussing how his lyrics and his band’s music has helped the fans of Touché Amoré on a worldwide scale, suddenly Mr. Bolm becomes a tidal wave of excitement in conversation. His authenticity in song and then as a person, when negotiating people’s reactions to the quintet’s art is infectiously uplifting.

“It really is inspiring. It’s an interesting thing, I feel like playing in punk bands like us, where you are running around and screaming and in people’s faces most of the time. It gives me a viewpoint where I can gauge what someone is going through by the way they are singing songs back at you.”
He continues – “It’s an interesting thing that I feel very privileged that I have the ability to experience that. But I can tell when someone is singing along because they have heard the song hundreds of times or because it has resonated with them so much they are yelling words back at me because it is important to them or it has moved them in some way.”

With a statistic that in the US alone, one in two women and one in three men will be diagnosed with cancer in their lifetime, it is reasonable to assume that many adorers of the five-piece would have gravitated even more-so because of Stage Four. Honestly however, Jeremy has always written and sung his thoughts truthfully and passionately, no matter how dark or oppressive they may be. It is why thousands of devotees have assembled an unbreakable bond with Touché’s raw punk sound.

“I feel like when we do support tours like we are right now with Thursday, there’s an unlimited number of people reacting to our set because we are not the headliner, but we can find the pocket of fans who are focussed on us.
“Especially because this is our first time playing a lot of major cities in the US on the back of this record, it has been really enjoyable seeing the people who enjoy our band react so passionately to the new songs. It has certainly put me in a really happy place experiencing that.”

Is it more powerful now than it was on the back of your debut album …To the Beat of a Dead Horse in 2009?

“Honestly, I think you would have to be a REAL asshole to not appreciate people who love your band singing your lyrics back to you no matter what stage of your career you are at (laughs). We are a band who will be 10 years old soon, which is ridiculously hard to believe. We were always a band who thought we would never play anything besides basements or house shows, so getting to play exotic places and having people know the words is so extraordinary. I will never tire of it or take it for granted; it is very very meaningful.”

A surprising feature to this fourth LP is that Touché Amoré have progressed further musically and sonically more than ever before. Experimenting with new melodic atmospheres and soundscape and lessening the raw punch the band were infamous for; it would have taken fans and critics by surprise no doubt, but its beauty is beyond astonishing. One major component in this transformation being Jeremy’s vocal delivery on selected songs where he embraced a post punk expressed singing-manner similar to Nick Cave or Matt Berninger (The National), a rather large variation from his admired ferocious yell-style present on all prior albums.

“I’m glad and very thankful that you picked up on what I was attempting to do (laughs). Funnily enough not everybody knows those amazing artists as reference points. That idea kind of came at a perfect time because we had recorded two cover songs just before we started recording Stage Four. We covered a song called Available by The National for a compilation for our friend Chris Hansen who runs No Sleep Records, it was for his mother when she passed. That was the first time I tried actual singing and a great place to start because I just had to imitate someone that I admire.”

He elaborates further – “Then we did a Nirvana cover of a song called Lounge Act for Robotic Empire Records for their Whatever Nevermind compilation, a tribute to the Nevermind album, it was a Record Store Day release. I obviously sang on that one too. Anyways, we recorded it with Brad Wood who produced Is Survived By and Stage Four; he is a very inspiring person who gets very excited when a musician is trying to challenge themselves. He definitely makes you feel as comfortable as possible, I have never thought of myself as a singer, but he was by my side the whole time trying to show me how to make the adaptation work for my style and limited abilities. “

Was it just those two songs which encouraged the vocal evolution?

“It actually worked to my advantage in a way, because one of my idols/inspirations is Leonard Cohen and he has a very limited range. I by no means have much variance at all with my voice, the little scale movement it does I am ecstatic with. So I just tried to make it work and I think it is going halfway decent ok so far (laughs).”

In the coming months TA will be visiting Australia’s shores for the fourth time which undoubtedly will have enthusiasts of the band more elated than the five-piece themselves. Having last toured with Buffalo metalcore favourites Every Time I Die in 2015, this tour actually marks a higher level of importance for Australians as during that tour, Touché announced they were having a short break from their full-time music commitments. It plagued this writer to ask though, will a similar announcement be made this time around? Could Australia or the world be faced with another hiatus of sorts?

“Because tours in Australia are rather short comparably, it’s one of those things that when you get the offer you know that it isn’t going to be six weeks; you get to go away to another amazing country for like two weeks tops. So it’s nice to be able to have such a short intense overseas trip like that in a great place, it isn’t going to bum anyone doing that you know? (laughs). So if we get the offer I would say we will take it almost 100% of the time. That’s why we have come back every two years.”

To quote a Touché Amoré song itself, this really is “The Great Repetition” for us. 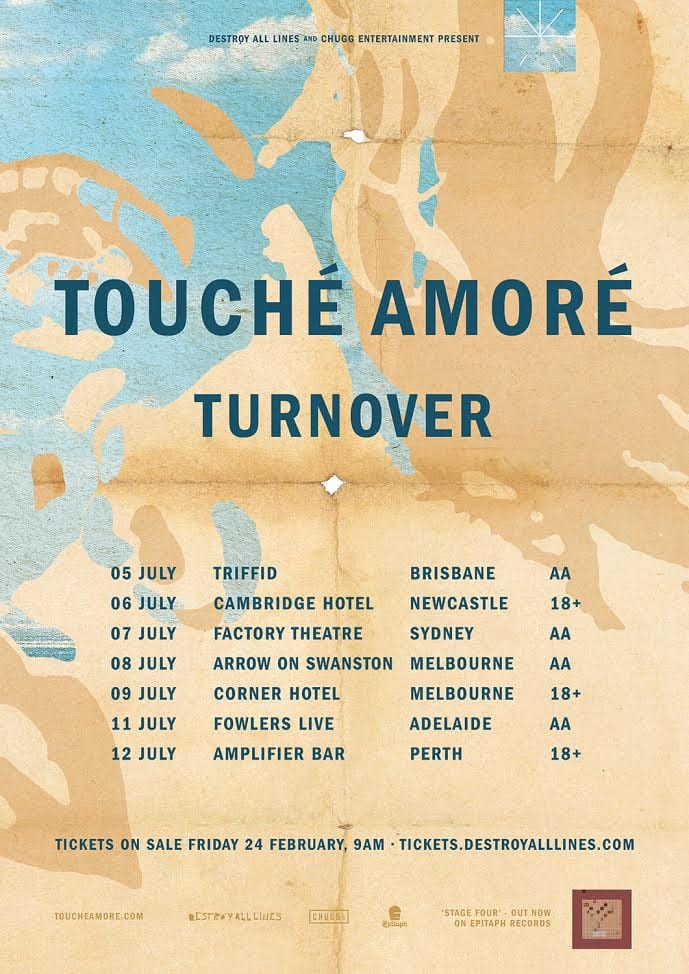