The HAUNTED have Strength in Numbers

“I do, and I often get called out on it!” roared Patrik Jensen, guitarist for Sweden’s The Haunted when I ask if he remembers his early vision for the band. “I wanted to create… listen to this (laughs)… a mixture between AC/DC, Slayer, and… Chris Isaac. I like the twangy guitars, so I thought, ‘Okay if you make them really heavy twangy and eerie kind of… I had it in my head, and I still think it would be cool but that’s what I told people when they joined the band (laughs). So that was my early angle…”Since that initial period circa 1988, little has changed in the hearts of Jensen and The Haunted – save perhaps for the strange Isaac obsession.

Since that initial period circa 1988, little has changed in the hearts of Jensen and The Haunted, save perhaps for the strange Isaac obsession.

“Not much has changed at all,” he laughed. “I’m still 25, man. I don’t think I’ll ever get older than 25. I still listen to the same albums and I still monkey about on stage like I did when I was 25. I don’t know if things have changed in my head. I’m a huge AC/DC fan and to watch them on the VHS tapes I had and just the pure sweat pouring, the three and a half minute songs… I’m not a big Pink Floyd fan, standing there and just noodling… I like the physical aspect of it, so I think that has the same… our new album, there are songs on there that have the same kind of goal as on the first album; songs that really just get your adrenaline pumping – not from anger – just from like, ‘Yeah, let’s do something’. Maybe the songs and the song structures have changed but the goals of the songs – for my part, at least – are still the same. I’m not trying to write the worlds prettiest ballad or the best harmonies; I just want that adrenaline to let loose.”

When it came time to set goals for the recently released Strength in Numbers, Jensen concedes that as a unit The Haunted prefer to let the goals unravel in their own time, preferring to focus on the task in front of them rather than set unattainable obstacles.

“We’ve always tried to just write from where we are at the moment, so it’s more interesting,” he explained. “There are very simplistic goals, like we’re gonna write an album that pushes the boundaries or we’re gonna write an album that sounds like our retro hero bands, but for us, we have always written in the now. We are in our lives right here and now and whatever comes out is what we will have. Of course, when you have fifteen songs or something for an album you pick and choose, like, we have too many fast songs so we should keep two as a bonus – that’s the way you can sculpture an album. But for us, it’s always been a case of, ‘Okay, time to write a new album, let’s just get our brains together.’ And if the band has been going through a difficult time, that might come through with the music, but we would never sit down and say, ‘Okay, let’s write a happy album or something like that’. I’m more into spontaneous creative impulses. No goals. Whatever comes out is what comes out. I think Strength in Numbers is a pretty rounded album. It has both fast songs and heavy songs and melodics – it has a bit of everything, which I think is a hallmark of The Haunted. We try to bring all the elements together with our music.”

While the title of the album might seem self-explanatory on the surface, Jensen admits that there is more thought and meaning if you delve closer.

“We’ve never been a political band,” he maintained, “but I think it’s important for every person in the world that if you want to achieve the change, you need to get more people with you on something. Like if you wanna get your salary raised at work if you get the whole office together you might have a better chance, and it’s the same thing we’ve seen with elections these last two years that have had unexpected outcomes and you wonder if in hindsight the people’s opinions might not have been grounded in facts. I’m not to say who’s right or wrong but you can sway the people’s general opinion through having some Facebook post, so if you get enough people together, you can make them do changes for the worse. I’m not saying which is worse and which is better, but I think people should be aware that they should check facts and not just go mad after seeing some random post on Facebook or something and then go and cast their vote for something they wouldn’t do in normal cases. Without being political or anything like that is – the whole fake news and everything – I think it’s important that people use their brains. Strength in numbers can be a good thing and bring change for good, but it also causes harm if the influence comes from the wrong side. It’s just an observation of the times we live in.”

Over the course of their career, The Haunted have become known for the diversity in their records and willingness to alter a successful formula in the search for self-betterment, a point which is not lost on Jensen.

“We had the same producer for the first three albums,” he shrugged. “Then, for the next four or five we had another producer, so we haven’t changed the actual people that we’ve been working with that much, but I think we’ve always tried to make something new with each album. There’s no point trying to repeat what we’ve already done. I know there are bands that do that – Okay, I love AC/DC so please don’t change your recipe (laughs). They can keep on doing what they’ve always been doing, but most other bands are better off creating something new. We’ve always tried to change amps, guitars, and maybe even the recording rooms where we record the drums; everything to create a new vibe on the album so that actually worked for this Strength in Numbers album. We chose to – after four or five years with Tue Madsen, the Dutch producer – we decided to use another guy: Russ Russell, a British guy who has done Napalm Death and Venomous Concept. He’s a great guy. He used to do Napalm’s live sound, and we met him when we toured with them back in ’98, so we’ve known him for a long time. Russ is a very funny guy, and he can create a very hard-hitting production, so we thought it was time to change producers as well. Short answer to the question (laughs) – yes, we do try to make all our albums sound different.”

Another thing that has had a prominent effect on the sound of Strength in Numbers is the return of two of the elder statesmen to the ranks in Marco Aro (vocals) and Adrian Erlandsson (drums), who returned to The Haunted family after absences of ten and fourteen years respectively for Exit Wounds in 2014. With an album under their belt, Jensen says the chemistry and cohesion are back better than ever.”

“My first band Seance toured with At the Gates, and I got to know Adrian very well,” Jensen recalled his early days with Erlandsson, “and I moved to Gothenburg because I wanted to form a band with him. Adrian is a very cool drummer and a good guy and contributes a lot to the atmosphere. He’s a great prankster, so he keeps spirits high. Marco had to leave the band back in the day because he had three small children and now ten years later they can take care of themselves better, so there’s not as much pressure on his wife, so he came back. He’s a great frontman and also very funny. We have a lot of fun together these days; a lot of pranks, a lot of jokes and I think also you can hear on the new album that this is a band that is having a good time again.” 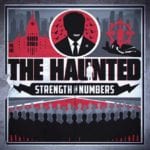