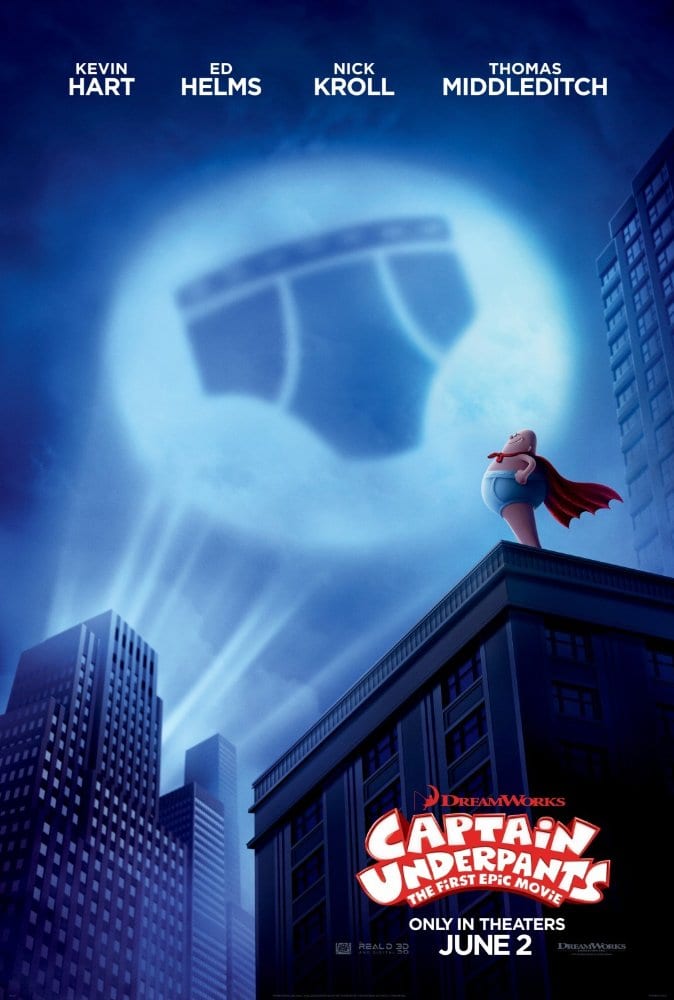 Be prepared parents because during these next school holidays your child may start running around the house dressed in their underwear yelling out ‘CAPTAIN UNDERPANTS!!!’ Yes Captain Underpants: The First Epic Movie is that kind of film. It’s the kind of film that every child aged thirteen and below is going to want to see and then want to copy.

Of course based on the novels by Dav Pilkey the series is kind of like a modern day Beavis + Butthead, it centres around two kids, who you pretty soon realise are going to become stoners and High School Dropouts, who dream about pranks and designing their own comic-book character –a character that they call Captain Underpants, of course the fun really starts when they work out how to hypnotise their mean spirited High School Principal and turn him into Captain Underpants.

One of the stars of the new movie is none other then actor and comedian Kevin Hart (Ride Along, Get Hard) who voices one of the troublesome scallywags, George. Hart admits that he was out of his comfort zone voicing an animated character but says at least this is a series that most families are looking forward to. “I feel that you can’t have kids and not be familiar with the Captain Underpants franchise,” he says smiling. “I guess you can say poop, farts and potty-talk are legendary in my house which is why my son is a major fan of Captain Underpants. So when the movie came up and my name was in the hat I was excited because this was something that I wanted to do for my kids. Yes this is a great franchise but I knew that this was something that I could do and my kids would think that their Dad was the coolest guy in the world, so that is why I jumped at it. But I was given the opportunity by the powers-that-be at the studio at the time were excited by the name Kevin Hart when it came up. So I stepped up to the plate and did what I had to do.”

He goes onto to say that you can’t get anything funnier then when Krupp turns into Captain Underpants. “Underpants is always funny you can’t go wrong with that,” he says. “And a guy that pulls his underpants up to right below his chest that his automatic laughter, there is so much room for jokes. We could have put some hair on him, but we chose not to. So it’s not bad, I applaud it, it makes me laugh every time I hear the tra-la-la and every time I see the guy in the underpants in the hero-like stance. You know you really are making fun of your cool superheroes that do the underpants with the cape ala Superman, Batman and Robin – you know you’ve seen those guys before, so this is a truncated version of that, it actually looks like a diaper to some degree, a diaper with a cape, but it’s cool.”

Of course voicing Principal Krupp and Captain Underpants is Ed Helms – a man that most people would know from the hit comedies We’re The Millers, Vacation and The Hangover. Hart is full of praise for Helms saying, “Ed Helms bring so much, man. Ed Helms is a funny talented guy. He’s definitely been in the business long enough to know what to do to enhance the character. He didn’t do anything to take away, everything he did was to add and the nuances that he brought to the character helped amplify Captain Underpants into the guy that he is on the screen today. The same with Principal Krupp Ed Helms did a great job of the back and forth and the transformation, from making the separation from these two identities that these characters have.”

Surprisingly for a comedy Hart says the cast never really got a chance to play off each other. “We were never all in the booth together,” says Hart. “So we were never able to play off one another but I was able to hear the work that they had done prior to me coming in and I would assume that they were able to do the same. And when you see the cast members that you have, they are all bringing their A-Game and they are all coming to work prepared and just having a good time with the process of evolving your character and I must say they all did a wonderful job.”

Of course helming the film is director David Soren (Turbo) who Hart says also did a great job. “David and I had great chemistry,” he says. “You know I think a typical session was going in and going over the lines and letting David stay true to his process. You know David likes to get it and our session were about getting what we needed, and I like to walk out of there confident in knowing that he what he needed to go and execute the scene the way that he wanted to. But I was very confident with it, man. He knows what he wants and he knows what he needs to do to get it.”

Hart says they also had a lot of fun making the film. “The most fun part of making the movie was seeing the progression of the character,” he explains. “Seeing it start from a black and white sketch and then pieces of colour added to it and then the full range of description with the animation is there in front of you and you are like ‘wow that is going to be my character.’ And then you get to see your character animated and moving, gradually you start to see everything start to pick up, the facial expressions, and to me the building of the character was the most interesting part. That’s what I loved, I loved watching George come to life.”