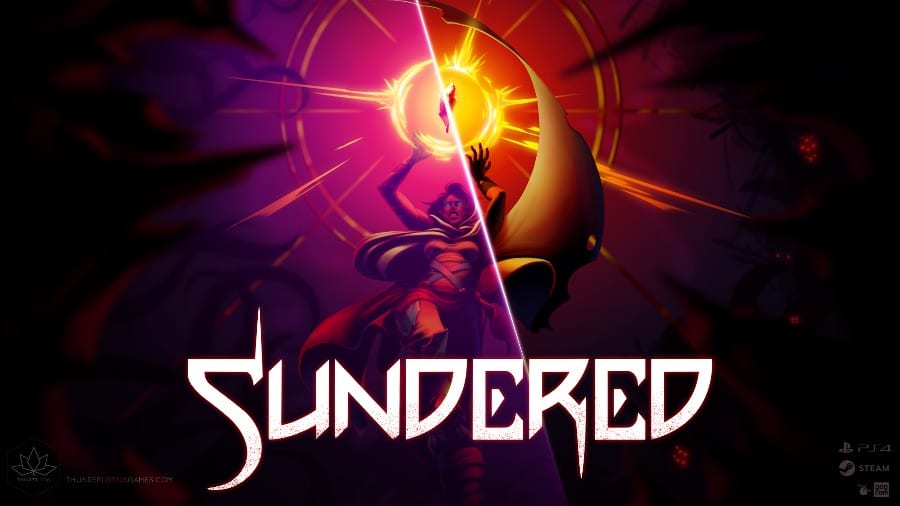 My reviews so far have overwhelmingly been about colourful, beautiful indie games starring gorgeous music and hideous monsters. Today, ladies and gentlemen, is no exception. It’s just the way things have panned out – but I wouldn’t have it any other way.

Sundered by Thunder Lotus Games is a quirky, indie action platformer featuring the most beautiful hand-drawn art I’ve ever seen in a game. Each frame of animation is lovingly rendered to perfection – buttery-smooth, reminiscent of old Disney movies. This style brings enormous gravity to a game essentially about slashing giant hordes of monsters to death. Every object, creature, and character has great screen-presence, and are honestly a delight to look at.

Thunder Lotus was kind enough to let me interview them on Sundered. I asked them to describe, in their own words, what their game is.

“Sundered is a replayable ‘metroidvania’ where you resist or embrace ancient eldritch powers. You play Eshe, a wanderer in a ruined world, trapped in ever-changing caverns filled with hordes of terrifying enemies. You may choose to harness the power of corrupted relics to defeat the game’s gigantic bosses, but your very humanity will suffer the consequences.”

In Sundered, you explore several areas abandoned in the wake of a gigantic war, scrounge through the ruins, and piece together the events of the past… if you want to. The backstory elements are secondary to the core game experience, which, based on the mechanics, is fast-paced movement from room to room, unlocking shortcuts and defeating bosses. One design element I question is the game’s level-up system, which allows Eshe, upon dying, to boost her stats and abilities, making her stronger for the next attempt. Sundered seems built for skill-based gameplay, but it is possible to level so much that almost nothing threatens you. I can’t call this a ‘flaw’, exactly – Sundered’s forgiving nature makes it more accessible – but it seems a little disingenuous to a dark-themed, skill-based game to allow Eshe to become an invincible god with enough grinding. Why utilise the movement mechanics and various skills in Eshe’s arsenal, when you can stand in a corner and mash the standard attack button until everything is dead?

On Sundered’s movement, I asked Thunder Lotus about their design goals:

“We definitely wanted the player to feel swift, agile, and powerful. But we also wanted the character to evolve throughout the game, with new abilities and mechanics being acquired along the way. A design goal is, therefore, to make the gameplay as fun and suitably challenging at the beginning of the game – when your movement is comparatively limited – as it will be later in the game – when your move set is much more complex. Sundered has a lot of systems working alongside each other, and once players get into the groove, they really enjoy the game.”

Movement feels good. Wall-jumping is Eshe’s bread and butter, and you can combo flying enemies for extra air-time and distance – a tactic I’m sure will be exploited in speedruns. The more you play, the more movement options you unlock; which is useful, as later on, you’ll be fleeing from literally hundreds of monsters (if you haven’t become an over-levelled god by that point).

As I’ve mentioned, when booting up Sundered, its art-style is the first thing to catch the eye (and imagination). I wondered what inspirations Thunder Lotus had brought to the canvas:

“If you’re familiar with our first game, Jotun, you know our art team is all about hand-drawn animation. The animated films of our youth (Nausicaa of the Valley of the Wind, The Secret of Nimh, etc.) continue to be our main artistic influence, though we are notably taking those influences down a creepier and darker road with Sundered than with Jotun. Meanwhile, thematically, we’re taking our inspiration from H.P. Lovecraft’s writings, but taking creative liberties to create an original backstory for Sundered’s world and its characters.”

On the benefits of hand-drawn assets, they explained:

“Visually, they definitely lend our projects a unique look, but beyond that, there’s an organic feel to the animations that can be difficult to reproduce in 3D. But surely the main benefit is being able to provide an outlet for the prodigious talent of our art and animation team!”

Exploration is key to a metroidvania experience, and Sundered’s areas are a mix-bag. Some are chillingly gorgeous, crafted to imply a story, while others are meat-grinder-ey: combat zones where you’ll be making quick work of the game’s horrid beasties. The reason for this became clear as we talked:

“To be clear, we’re going for a mix of procedural and hand-crafted in Sundered. We are, of course, taking some inspiration from Rogue Legacy, as our map regenerates upon each death. But the twist in Sundered is that the overall structure of the world remains set in stone, the landmark rooms, boss rooms, etc. are fixed, while the subsections between them are randomized upon death. Think of it like Diablo 2, where the progression of the levels is always the same, but the individual tiles are always different. This allows us to make design choices which are core to a metroidvania experience, like backtracking and unlocking new abilities that unlock new sub-sections while keeping the experience fresh.”

For a fast-paced action game where you’ll be moving from room to room in a matter of seconds, Sundered sure has a lot of wondrous environments to admire – but you won’t spend long admiring them, as drastic level-ups ensure you won’t spend too long in one environment. It’s a strange kind of criticism – that the game is so beautiful, I want more incentive to take in its beauty – but there you go. I think the problem could be solved by halving the amount of exp gained by the player, but then, I’m no game designer.

Sundered, by the way, is very fun and interesting. I want to keep playing it, and you should, too.

I gave Thunder Lotus the chance to advertise their game to HEAVY readers:

“Sundered is a horrifying fight for survival and sanity. It’s a unique take on the classic metroidvania genre that features beautiful hand-­drawn art and animation; a rich, immersive world; tense battles against hordes of enemies; epic boss fights; and unique abilities that may be powerfully corrupted… at a cost. We’re available now, worldwide on PC/Mac/Linux and PS4.”