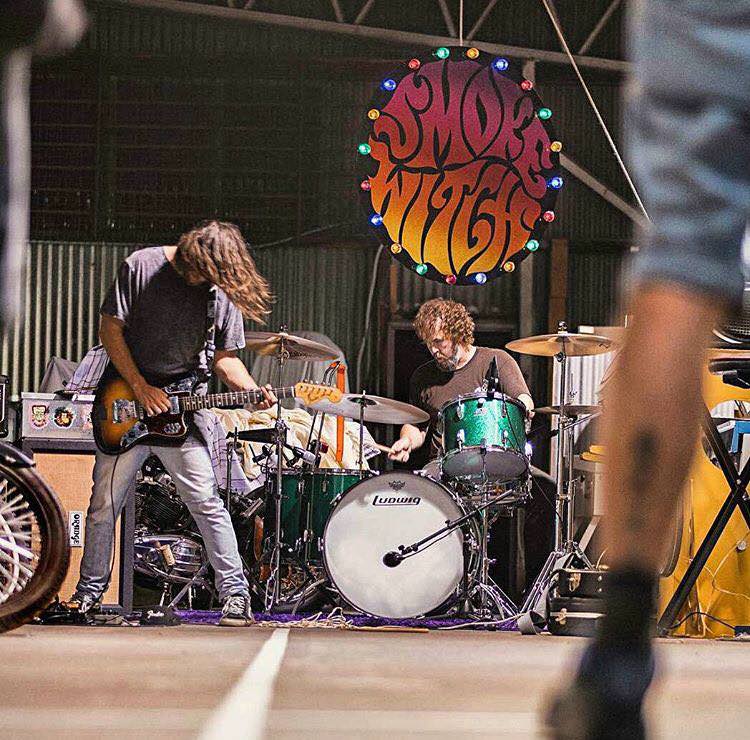 “Karl (Stehn, drums) and I have been playing for about a year and a half now, just jamming together,” guitarist for instrumental metallers Smoke Witch, Sam Wright explained. “We both come from a small town of Horsham, which is out in the country, and we both love good tunes, so we knew of each other over the years, but it wasn’t until recently that I moved to Geelong and I kept running into him at gigs. We both played in other bands at the time, but I think the stars aligned because we just kept running into each other. We loved similar tunes, and then we decided it might be cool to have a jam together and hit it off and the rest is history.”

Smoke Witch released their self-titled E.P. earlier this year, and Wright says the duo is delighted at the response it has so far received.

“It’s been great,” he enthused. “It’s been a pretty exciting year for us overall. People seem to have really taken to the E.P. Karl, and I just play for the love of music, and for us, it’s just about capturing… we just jam, and we capture that vibe and then cement it into a solid song. The riffs just come out, and from there, I’m guessing people liked them, so we’ve been dishing out C.D.’s and L.P.’s all around the world so it has been a good and exciting year.”

The L.P. has been released already in a limited edition format, but Wright says that the boys have something special in store for their fans at this weekend’s Brewtality Festival.

“We’ve only so far had the first L.P., which is running low, and now we’re about to release a limited edition electric blue vinyl at Brewtality. Currently, we’ve only got the two vinyl’s coming out. We’ve got 150, and it is definitely pretty cool looking. Pre-orders have just started for that. I literally put them up the other day, and I’ve had dudes from Canada and Italy straight onto it (laughs), so that was great. We will have them for sale at Brewtality and release it from there if there’s any left.”

Being Smoke Witch’s first album, Wright concedes that they didn’t go into the process with anything more in mind than putting out a good, honest, solid release that they were both proud of.

“We started just jamming, and we wanted to capture a live sound and a bit of a journey,” he outlined. “So going in we laid down about ten songs at Bakehouse Studios, so it was a full day of capturing just some jams, really. The goal, I guess, for our own sake, is it’s nice to have a decent quality copy of what you’re doing. I just like the idea of keeping things so that in 20 years time I can look back on it and be proud. The intent wasn’t to take over the world or anything, more just capture what we were doing, and if people like it, we’re happy to put it out there.”

The sound put out by Smoke Witch for a duo is phenomenal, and mainly because of that, Wright admits that there hasn’t really been any serious discussion or intent to expand the current format.

“As we started jamming, we just had a good chemistry going,” he pointed out. “We had both played in heaps of bands before that that has been a four-piece up to a seven-piece, but as a two piece, it’s just simple. You get good communication going, and we just read each other well, and as the jams flowed, the songs evolved, and we could just go on a cool journey together. Then when a moment hit us, it was like a punch in the face. It was quite exciting to capture the sound as a two-piece; I’m just on guitar, so I have had to muck around a bit with my gear, but it has probably changed the way I write songs more than anything – or write a riff. I’ve had to adjust a few things live just to get a beefier sound because I love a big riff, and to get that big sound live, I’ve had to do a bit, but we work it, so it builds up and then it’s a bit of a rollercoaster ride. It will go up and down so when the up bits come in it sounds big and then the downer bits are a bit more mellow, which helps to emphasise the heavier bits in a way.”

So much so that Wright says despite pressure and general ribbing from their mates, he and Karl will likely continue with just the two of them and no vocalist.

“Going back to how it works so well as a two piece, everyone has been saying… we’ve had a few people offer to sing for us or play bass, and now it’s almost like we don’t want to cave. I hear melodies in my head when we are playing a song, and there’s always the idea of maybe getting in a few guests here and there to start singing and spread the love a bit and get other people involved. I guess with singing for us, once someone starts singing it can also pitch your style and sound so with no vocals we are sort of open to interpretation more in a way. It can be heavy or a dancier groove. Like Josh Homme said: ‘heavy enough for the boys or sweet enough for the girls.'”

Coming into a saturated music market is growing increasingly difficult in the modern era, and Wright admits that Smoke Witch has felt the pressure.

“Over the years playing getting people to your shows is always hard,” he conceded. “There are so many awesome bands out there which are a good thing. We’re spoilt for choice in Melbourne, it’s unreal, but I suppose there’s also all that other shit getting around now like digital and the live scene is really dying in a way. This is just my side of it, but I suppose getting recognized is always hard for a new band.”

In this modern age of disposable music, simply getting the attention of the music loving public is hard enough in itself, and keeping it is even more difficult. A band has to stay focussed and try to maintain some sort of X-factor, and Wright agrees that finding that can be at times frustrating and at others near impossible.

“From the guitar side, I try to keep things different but also something you can relate to as well,” he said. “I don’t like to do the same shit over and over, but at the same time, you need that bit of repetitiveness for people to get into. From the songwriting side of it, you have to keep things fresh but in terms of as a band; Karl has been unbelievable with setting us up and getting us out there. He has an artistic background and is a creative freak, so he’s been the wizard behind the witch (laughs). As a two-piece without vocals or bass, we have created a visual thing live as well. We try to make it a bit of a journey for the viewer; not just about the music. We’ve been adding a backdrop in with old chopper footage like motorbikes and trippy colours and lights going with a smoke machine, all that classic stuff. It seems to work well with our sound.”