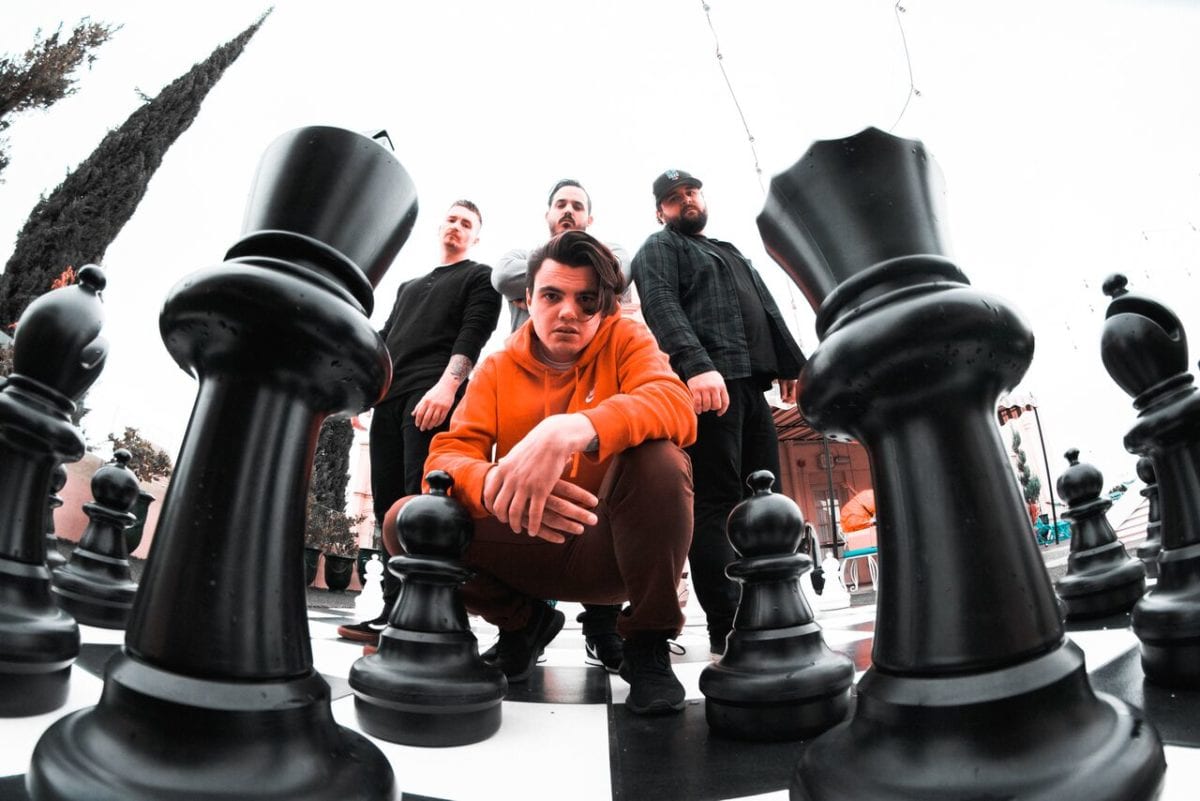 “That’s rare for us,” laughed Stray From The Path guitarist/vocalist, Thomas Williams in relation to the aggressive nature of the bands upcoming album, Only Death Is Real, “but there’s plenty to be mad about, and that’s why we started the band to begin with because it’s an outlet for us to get our aggression out over the way things are that we feel like we can’t control. But now we’re in the band, with the platform we’ve been given across the world, it feels like maybe there’s something we can do about it.”

Only Death Is Real, due out on September 8, sees a departure from Stray From The Path’s usual writing and recording process in that this is the first album to feature a collaborative effort with input from each band member.

“To be honest, most records that we’ve done before this one, I would write the songs on my own, and then I’d bring them to the guys and we’d either leave them out or not change them. But this one, I went into it with a bunch of songs already written, but we didn’t end up using any of them. We ended up writing almost all of it together which was cool and exciting. Previously, it put a lot of pressure on me – feeling like I had to top the last one or do something different – so this one felt exciting and fresh because it was the four of us putting our heads together and doing it and because of that it is a lot darker and a lot heavier. That’s probably why we’re all super excited about it too because everyone feels more a part of it than anything else we’ve done.”

The title of the album is confronting and menacing in its right, with Williams saying when you analyse it in its simplest form it is pretty self-explanatory.

“The title shows… there’s a lot of stuff that we…,” he stammered, “all of us, over the period of the last record to this one, have experienced some loss of our lives as far as people close to us passing away. And I think because of that we noticed that we could be mad at the things we were mad about, and we could love the things that we love. We could do the things that we do, and the only thing that is certain in life and the uncertainty of life is that death is real for all of us. That’s the way we were looking at it. Sometimes you get frustrated when you can’t control something, and you get frustrated when something is super negative in life or positive and who knows? Things affect you in some sort of way but it doesn’t really matter because at the end of the day the only thing that we do know is gonna happen is we are gonna die, and I think it’s a negative and a positive way to look at things that at any minute something can be taken from you.”

The cover depicts a series of chess pieces seemingly fortuitously lined up neatly in a row, but Williams reveals that what looks random is anything but.

“The cover is supposed to represent a hierarchy in the world,” he explained. “The pawn is supposed to be the civilians – the everyday person; the rook is the police; the knight is the military; the bishop is the church; the queen is the banks, and the king is the elite. So the way you look at it going down from the king to the pawn, you can even see the size difference in each figure, and it shows you how little and insignificant we are or how insignificant they make us feel. That’s what it’s supposed to paint a picture of. That’s why the pawn is orange to represent a prison jumpsuit, and with the first track saying: ‘They want the pawns to fight each other and say we’re not the same but don’t hate the player, hate the game’ is kind of the chess reference there that all those people above the pawn are pitting the pawns against each other.”

The lead single from the album, “Goodnight Alt-Right”, has created a great deal of controversy since its release with some people claiming it encourages violence and hate towards Donald Trump, but Williams says that although all music is open to individual interpretation, that was not the bands intent when making the video.”It was definitely pretty wild for a bit there,” he laughed. “It reached people that we thought we would never reach and those people helped us reach people even higher than that, so it was cool. With the film clip, I think a lot of people took it the wrong way. We even saw people trying to say it was about people kidnapping Trump supporters and murdering them! There is no-one getting murdered in the video – the whole point is that there was a white terrorist planning a terrorist attack

“It was definitely pretty wild for a bit there,” he laughed. “It reached people that we thought we would never reach and those people helped us reach people even higher than that, so it was cool. With the film clip, I think a lot of people took it the wrong way. We even saw people trying to say it was about people kidnapping Trump supporters and murdering them! There is no-one getting murdered in the video. The whole point is that there was a white terrorist planning a terrorist attack, then he’s stopped by a group of vigilantes. To us, wouldn’t you want someone to do that? But people took it the wrong way, and it kinda got a bit out of hand. But that’s the point of music and music videos, in general, is that it’s supposed to be interpreted a certain way, and people can take it which ever way they want to. Some people took it the good way, and some took it a bad way, but it is supposed to make people react. It was definitely crazy, but it is what it is. The statement still stands, and I think with recent events that have happened in America, it shows how true they are. The future will tell more about where this goes.”

Despite being around since 2001, and releasing seven albums before Only Death Is Real, Stray From the Path have only really started to make an impact on the metal scene with their two most recent albums, Anonymous and Subliminal Criminals. Aside from the fact that they are obviously improving as a band and therefore attracting more attention, Williams also feels that the fans needed to grow and adapt to their music as well.

“You know, it’s a weird question,” he sighed, “and I feel like I know the answer to it, but I don’t wanna sound arrogant (laughs). It’s like we were ahead of our time. I look at a lot of bands that were around when we started and put out Make Your Own History and Rising Sun, and no-one really cared about us then. The bands that were popular at the time were not at all like us, and all of those bands have died off, but we’re still around. For me, I feel like it needed time for the fans to grow up. I’m sure you’re guilty of it, and I know I am guilty of it, but when I was a younger kid, I used to like some pretty terrible shit (laughs). I was listening to… I don’t wanna take a shot at anybody – but I was listening to band A and then listening to band B when I was a younger kid – band B being Every Time I Die and band A being a pretty terrible band – and then I grew up listening to Every Time I Die and I haven’t listened to band A in a long time. I think I just needed to grow up, and it was pretty intense music for our time. It wasn’t a popular genre; it wasn’t like anything that was going on, so I think our fans needed to grow up and get into more mature music and I think that’s why you see bands like Every Time I Die and Architects are bands that have been around for a long-time but now are bigger than ever is because those people: those fans grew up and they stuck with those bands.”