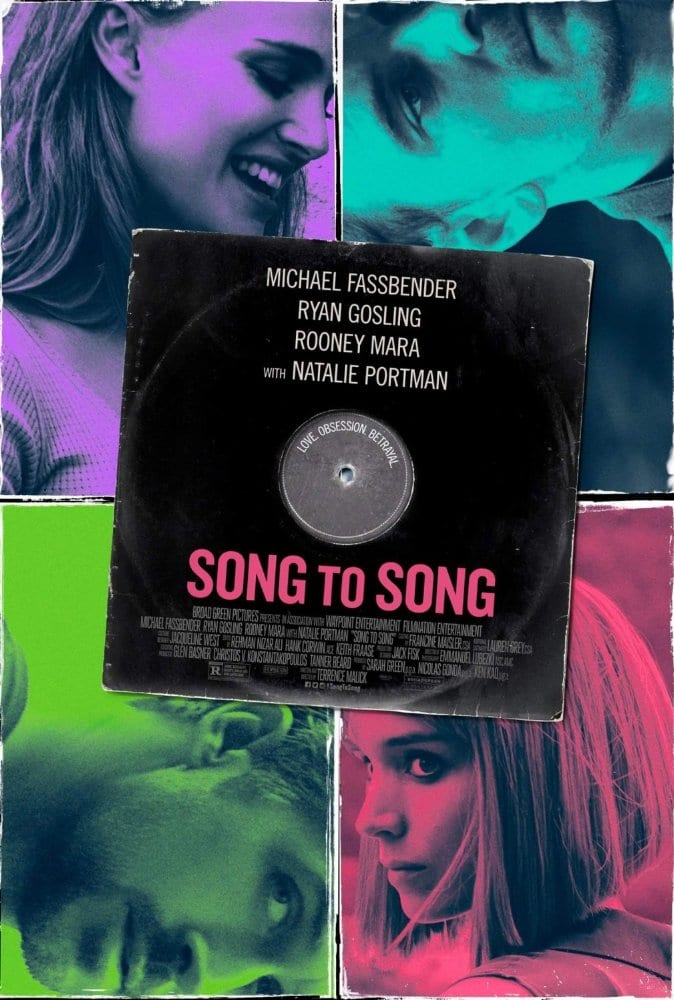 When you think of Oscar-nominated director Terrence Malick, it isn’t a film based on the music industry that you think of. You think of his deep exploration into war with The Thin Red Line or the obscure The Tree Of Life that explored… well, to be honest, I’m still not one hundred percent sure what it was looking it.

For Michael Fassbender, the last twelve months have been interesting for him in the cinema landscape – neither Assassin’s Creed or Alien: Covenant turned into the hits they were expected to be, but the festival buzz around Song To Song might just be the thing that turns his year around. When talking about the film he says it was the initial conversations he had with Malick that got him interested in the film. “The main thing that was my note was that this character was like Satan from Paradise Lost,” he says. “That was the note that I came out with, and he was like ‘are you interested’ and I was like ‘yes absolutely’ and so I flew out to Austin four weeks later.”

Fassbender is also full of praise for Malick as a director and his directing style. “He is just a very singular voice,” he explains. “I mean, he is just a poet when it comes to the visual media storytelling, and even with the dialogue itself. I guess you might say America’s first auteur, after the French-wave cinema. I don’t know I just find that when I watch one of Terry’s films aside from intellectual, it also strikes something physically with me, great art normally does that. When we were filming, he would always yell at me ‘ATTACK Michael, attack’. So I guess you are trying to, especially with my character because he is such a manipulator, juggle stuff up and stir things up, provoke something and then do nothing. So it is a very exhausting by the end of the week because there is also the way that Terry shoots which is just one film magazine after the other. There is no break, you stop for a half hour for lunch, but aside from that, it’s just go, go, go. So it is hectic, but what I liked about it is that you have to be fit as an actor. You’ve just keep your muscles engaged all the time. I think though that he did understand the music – he would have understood it whether it be country and western or whatever, he just understands it. He understands the mathematics of it – there are two universal languages in the world, music is one and mathematics are the other. You don’t need any translations or subtitles it is the same for everyone, and I think that is where is genius lays.”

When talk turns to what his character, Cook, is like Fassbender admits he is a bit of a shock. “He’s doing a lot of drugs,” he says. “He’s throwing himself into any experience, trying to get all the senses so he can reach a higher power or a higher plain. He’s that kind of person that rallies against God in a way because he’s saying, ‘Why shouldn’t I be in that position?’ He’s a manipulator, and it is almost like that in some way he sucks the life out of things. But there is also a good side to him, there’s a curiosity to him and a realness but he does hurt, and he does bleed.”

Filming alongside Fassbender is the seasoned actress Natalie Portman who worked with Malick on his last film – The Knight Of Cups. She says her interest in the film was also sparked during discussions with Malick. “Terry talked to me about my character and my character’s relationship with Michael’s character,” she says. “We talked about how she comes from a background where she doesn’t have a lot, and she’s in great need financially, and this guy comes along who is a saviour in a way and then introduces her to a lot of darkness and sort of leads her astray. You see with these particular character’s stories that the deal with the devil is not a great deal to make, but I also don’t think that it is completely cynical on her part. In the film, it feels like this is an exciting person and somebody who is showing her a new world. You can see the appeal of that.” Portman says getting to shoot the film in Austin and at a music festival also brought an interesting element to the film. “It is obviously a place Terry knows well,” says Portman chatting about Austin. “He lives there, so it was wonderful to get to shoot there and have the city be part of the film, it’s like a character itself. And then there was the music festival that we filmed so much at. It was fantastic to be able to film at the actual festival because it had all the energy of a real music festival and all the people that you see are real people. You see the real things that are going on the real kinds of things that people do at a music festival, and somehow, Terry works in a way that allows you to infiltrate, and people just go with you rather than stare at the camera. It just feels like you are at the actual place and then, of course, Rooney was so brave because she was up on the real stage playing for this real crowd and seeing that was just so incredible. You know it’s real and to have that in front of a real audience it brings a different kind of energy than those concert scenes that you see where everything is extras or cast and stuff. This feels much more vibrant and alive. That’s the thing when you watch this movie; I think you see the musicians all at ease with the camera. It’s what you aim for as an actor, but they are just such interesting human beings. They have such extreme characters and are comfortable in their bodies and their personalities, and you just see that in such a visual way, it’s just great to have that colour in the film.”

Song To Song opens in Australian cinemas on the 5th October.