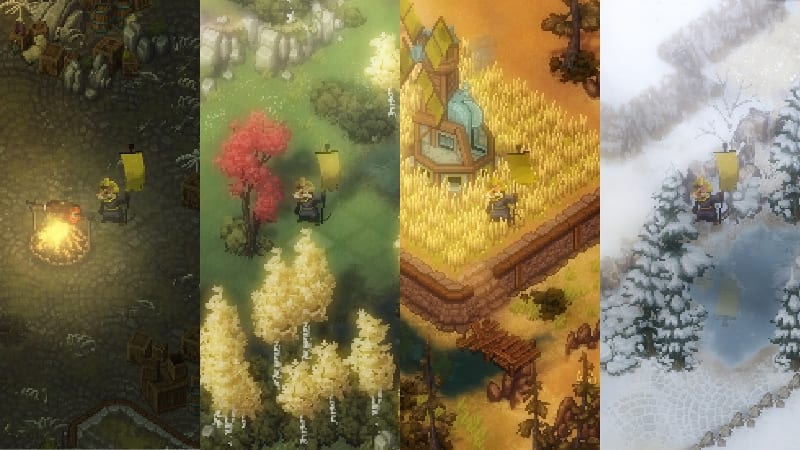 The RTS (Real-Time Strategy) genre has always been a favourite of mine, though I’ve never been any good at them. From succumbing to a two-minute zerg rush in Starcraft to shaming my ancestors in Total War: Shogun 2’s online mode, I would have given up my career as a general long ago if it wasn’t so fun. Colourful, atmospheric RTS’s can create ‘gaming stories’ unlike any other genre: seeing through the foe’s well-laid plans and crushing his defences, charging him with a superior force only to be obliterated by a few units in a tactical position – it’s exhilarating, and the same can be said for Pocketwatch Game’s Tooth and Tail, a dark and gritty, yet wonderfully colourful RTS that blends Watership Down and the Russian Revolution.

Once I had some hands-on experience with the game, Pocketwatch CEO Andy Schatz was kind enough to answer some of my questions.

One striking element of Tooth and Tail is the animal language: they speak a not-quite-Russian, not-quite-gibberish drawl, which turns out to be a fully translatable language created for the game! Andy explained:

‘The language was invented by Kevin Regamey of Powerup Audio, the team behind other massive indie games like Crypt of the Necrodancer and Darkest Dungeon.  Kevin is a perfectionist: he did a ton of research to identify common Russian phonemes, and then made those translatable to English.  Of course, by mixing them up we ran into lots of special cases where we had to adjust the rules of the language, so it’s not totally one-to-one with English.  A few passionate members of our player community have already figured out the language, though, and are even more fluent in it than we are.’

Passionate indeed. Tooth and Tail does a great job of immersing you in its world, making you patriotic for a nation of rats and pigs. The victory anthem will stick in your mind for a long time after playing.

I was interested in figuring out why the world of Tooth and Tail is so striking, and had a good idea already. Along with the often-unexplored themes of the Russian Revolution making for a revitalising take on the genre, the animal characters remind us of our childhood. It’s shocking to see such a mature take on these simplistic caricatures, almost a cruel awakening to what such a society would be like. Andy was happy to crush my innocence, listing the inspirations twisted to his dark, realistic vision:

‘The Russian Revolution and the movies/books of my youth like Disney’s Robin Hood (with the fox), Secret of Nimh, and Redwall. We started with the question: what would an animal society look like? The lives of animals are often solitary, poor, nasty, brutish, and short, predators are vicious and prey live in fear.  The resources at stake are shelter, territory, mates and food.  The animal world is not a pleasant place, in comparison to human society. Those thoughts reminded me of the Russian Revolution, where the populace was starving; in part because the farmers hoarded food during World War One. On top of that, animal species are very readable in terms of their mechanical qualities: skunks spray gas, foxes are swift and cunning. Since one of the big challenges on most Real-Time Strategy games is in learning the units and their roles on the battlefield, this seemed like the perfect theme for new players to the genre.’

It’s a clever idea, and intuitive to human experience, to draw parallels between the predator/prey dynamic of animals and human social castes. Tooth and Tail is essentially about prey species vying to become predators, a war where no-one can be a moral victor; just the one who eats. This setting is perfect for the RTS genre; a scrappy and brutal conflict between widely varied forces united in their bloodlust.

One decision did catch me off-guard, though. In RTS’s, the player often controls all their forces on an individual level; while in Tooth and Tail, you control a single commander-unit incapable of attacking, directing all of your units at once – or all of a single unit-type – by waving a banner. Andy explained:

‘We wanted to build an RTS that was primarily about strategy and improvisation, not how fast you could click. And so we used the gamepad as a constraint when designing the game. Gamepads are really built for controlling a single character, unlike a mouse and keyboard, which are built for controlling massive amounts of disparate information at once.’

In other words, Tooth and Tail is friendly to people like me, who find the frantic pace of traditional RTS’s hard to keep up with and incredibly difficult to master. Tooth and Tail is more about assessing a situation and choosing the best way to deal with it. Furthermore, I think the blunt, all-or-nothing approach to moving forces contributes to the game’s atmosphere of brutal, nasty animal conflicts.

When interviewing developers, I like to ask about a game’s cancelled concepts – ideas that were cut for one reason or another – to give me an idea of what the game could have been like, had a different vision been pursued. Andy was eager to describe his favourite cut content:

‘Well, we still plan to add lots of stuff, but I do miss some of the units we left on the cutting room floor: the Palace Guard, a giant, slow tortoise was one of our tier 3 units. The Racoon Hunter, and the carrion-collecting crow units were some other favourites that were eventually cut.’

‘Well, because it’s fun!  We’ve had people playing in our private alpha for years now, so we know the game is fun.  And it’s a fantastic game for experts in the RTS genre as well as total noobs.  There’s split screen play, a lengthy single player Story Mode, online ranked and unranked matches.  It’s a huge game for people to explore, and it has a little something for everyone. Oh, and also gas-mask-wearing, fart-lobbing skunks.  Go play it.’

Tooth and Tail is available on Steam, PSN, and Gog.