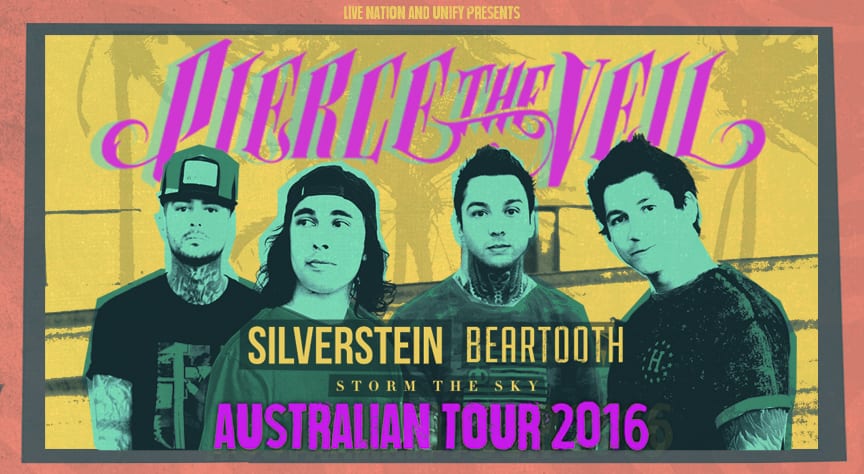 Being one of the most acclaimed bands in the post-hardcore scene, it’s hard to imagine that Pierce The Veil are discontent with their current level of success. It should come as no surprise, then, that guitarist Tony Perry describes their present status as “definitely enough”, and their achievements as what the entire outfit had “dreamed of”.

Nevertheless, the success is real for the San Diego crew, who are about to embark on an Australian tour on the heels of their fourth studio album, ‘Misadventures’. That record charted at #12 on the ARIA Charts and had yielded the act their first ever extensive radio play. But it didn’t come without any pressure.

“We went into it thinking we were ready to go, and things just didn’t work out”, Perry noted.

“That was why it was called ‘Misadventures’, because there were so many things that kept happening to prolong the process, including tours that we had scheduled when we thought we’d be finished so we’d have to interrupt the recording process to go tour again, and then try and get back into that mindset when we got home”.

While the Sisyphean nature of recording did get in the way, there’s something to be said about putting a hard deadline on the creative process.

But while stress did come from “everyone from labels to management to fans”, it wasn’t just external forces that contributed to it. “I think we put the pressure on ourselves”, Perry admitted.

“We told people it was gonna be out at least a year or two earlier…so it’s kind of our fault that people were ready for it when it wasn’t gonna be done”.

Despite the delays, the record is out in the world now, delving into themes that aren’t exactly easy to convey. On latest single “Circles”, frontman Vic Fuentes writes “about the positivity of people helping each other, like a story of two friends helping each other out in a situation”, inspired by the events that took place at the Eagles of Death Metal’s show at the Bataclan last year. It’s playful video, albeit enjoyable, paid respect to the tragedy by taking a different turn altogether.

“I don’t think it would [have been] very appropriate to try and do something based exactly on that imagery of what happened there. So we tried to spin it to something fun, and get the whole band involved with us trying to escape a situation, to keep it more lighthearted”, Perry clarified. He also shared that their next music video will be filmed right before they come down under later this month.

So that’s where Pierce The Veil is at right now: about to film their next music video before they embark on their first headlining tour of Australia, having set off on three prior trips here that saw them claim a place on the Soundwave line-up and support bands which were, at the time, objectively bigger. And yet, where they were supported Caleb Shomo’s early act Attack! Attack! Back in 2011, they’re now bringing Shomo’s new outfit, Beartooth, on tour to support them. “We were just talking about that when we were in rehearsals the other day”. Perry laughs at the distance between Pierce The Veil back then and the point they’re at now. “It’s been a while”.

Having been around on the scene for about a decade, Perry and the rest of the squad have a qualified perspective on the state of the industry supporting them right now. While unaware of the extensive dialogue currently taking place about the equality of females in the scene (“I didn’t even know it was an issue”), he certainly acknowledges its importance, praising America’s Warped Tour for its amount of female artists and adding that “it’s awesome that there’s a mix of everything going on”.

It makes sense for an act that’s been so successful in the scene to wish for its continued endurance. In that respect, Perry conveys his aspirations for its future. “I’ve noticed that some of the festivals seem to be getting smaller and things like that, so I hope it picks back up, I hope more and more fans start coming out to shows, you know? I just hope it keeps growing. Whatever you call this subgenre that this band is a part of, I hope it continues to grow, and I hope more and more people find their way to it”.

If you want to contribute to the continued expansion of the alternative music scene, it seems like heading off to see Pierce The Veil is a pretty good place to start. That’s partly due to their appreciation of their fan base, as Perry expresses his amazement that “we’re not a band where it’s just the lead singer”, and that someone could just walk up to him and say “I picked up a guitar because of you”.

As long as those kids keep picking up the shoddy acoustics their parents just bought them for Christmas; it’s a damn sure thing that Pierce The Veil are here to stay.

Pierce The Veil’s ‘Misadventures’ is out now via Fearless Records/Cooking Vinyl Australia.
GET YOUR COPY NOW!

PIERCE THE VEIL TOUR with Beartooth, Silverstein and Storm The Sky

Get your tickets here: