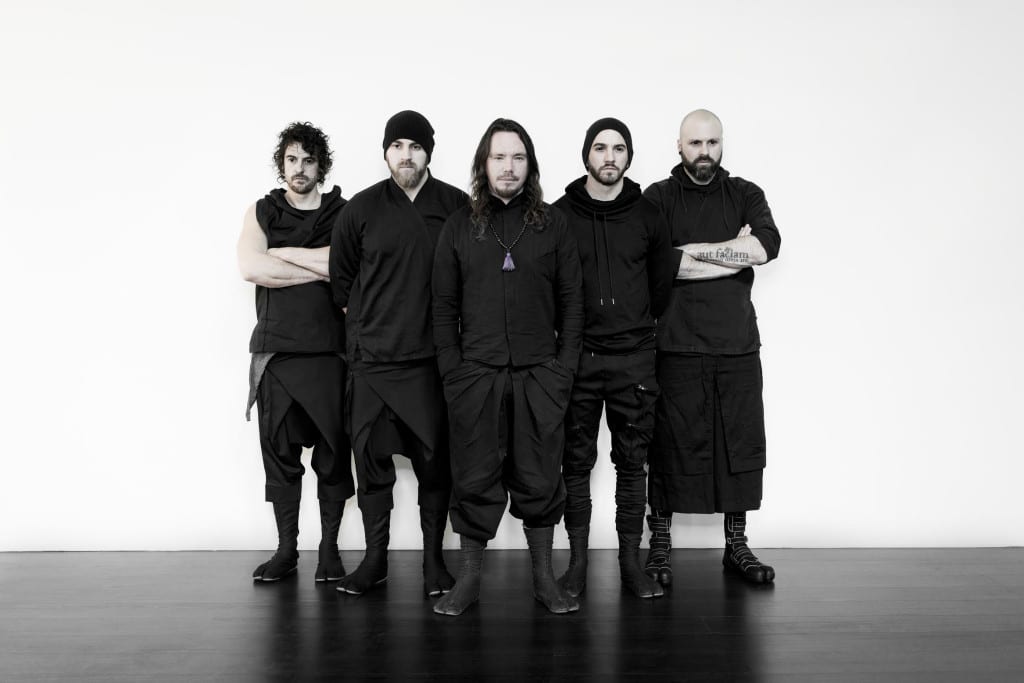 Eight years, two Eps, two albums (including to the soon to be released second opus Outlier) and bazillion live shows into their career, genre-smashing Melbourne five piece Twelve Foot Ninja are in kind of an existential mood. On the eve of Outlier’s unleashing upon the world, a world slavering for new music from the band, enigmatic frontman Kin Etik feels that the band has truly found itself and that they have figured out exactly who and what they are.

“I think in (first album) Silent Machine, we were still trying to figure out who we were as a band, as a unit,” he admits, “whereas on this one, after touring Silent Machine for so long, I think we got a really good grasp on who we are.”

This begs the question, ‘who exactly is Twelve Foot Ninja?’. It’s a difficult and confronting question, but in true Kin Etik style, the man is not lost for ‘straight to the point’ answer, and a more philosophical one.

“We’re exactly that, we’re Twelve Foot Ninja!” He laughs, “it’s hard for me to define, and I don’t think any of the other guys would be able to do it either. We’re a collective of unique individuals. Which is kind of an oxymoron! ‘We’re unique, just like everyone else!’

“I think we’re a culmination of neurones and biology and history and listening preferences, all mixed in a blender. And that’s what you get, a Twelve Foot Ninja milkshake!” he laughs again, “that’s about the best way I can put it. I’ve never been able to stamp an identity upon us, and I think it’s actually healthier if we don’t, just let it be what it is. That’ll give us far more options down the road for future releases.”

The band are known for the ridiculously eclectic sound, ranging from rock to metal to funk to Latin to hip-hop and whatever else they can think of, often in the space of one single song. And Outlier is no different. Kin tells us that he always listens to a pretty schizophrenic range of music to keep his appetite for variety and contrast in his songwriting and performance strong.

“I do, I think I just naturally search for things,” he says, “I like having my senses tickled by new sounds or sounds that I haven’t encountered or heard of. So I actively search, often, daily. I don’t necessarily wake up and say to myself ‘today’s a metal day’ and then go look for metal bands.”

So where do you find new music to check out and experience? “I usually use Youtube; it’s a great portal for that. Because you just land on something. I tend to just go down a Youtube wormhole. I’ll suggest something from the ‘suggested viewing’ list and see where that takes me! The things you can find are many and varied, and I think that’s why I listen to such a wide variety of things.

“But I’ve also grown up with a lot of different styles of music, so that’s definitely played its part too.”

The members of the band have also been in an existential mood as far as the entire future of Twelve Foot Ninja is concerned, in the lead-up to this record, and that has come across in some of the lyrics, imagery and vibes of the album.

“Being in a band and being in this current climate in this industry, we’ve been looking at this album as if it was make or break for us,” he reveals, “so with that came thoughts of mortality. And be that as a band, a creative force, or be that on a personal level, looking at your own mortality. So there’s a lot of that in there.

“If someone asked me ‘give me a theme for the album’, I would say it’s mortality. In fact, that’s just dawned on me!”

Kin takes the concept of life or death, make or break, even further, with relation to their aspirations for the new album and how difficult things are for touring original acts today. “We hope this album will (truly break them on a worldwide basis), purely because we’d like to continue doing it,” he says, “we’d love to continue travelling and touring. That would be the base level for any band.

“We hope that it will continue to grow to a level that will allow you to continue. There’s definitely that expectation on this album. If we can manage to spread out a little more, it’s going to be difficult for us to continue as times get tougher. Touring is really expensive. We want to keep touring the US and to do that we have to keep expanding our fanbase in the US to justify spending so much money to get over there.
“We would love to break new ground with this album. But we have no control over that, the best we can do is just put as much love into the music as we can, and see where that takes us.”