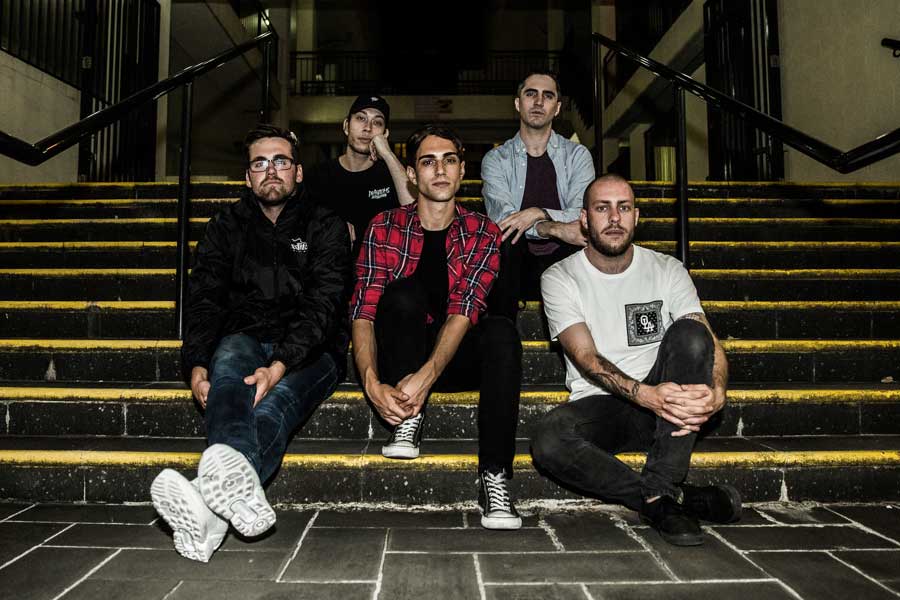 For over ten years now, Australia’s most adored alternative radio station Triple J has been hosting a brilliant program entitled “Like A Version”; for the ill-informed, it is a segment where musicians are invited into the studio to do a live-to-broadcast cover version of a song by an artist/s which they admire (as well as a stripped back version of an original track by the band). An invitation to perform for the nation and the JJJ hosts is an unquantifiable honour and throughout its history; it has certainly delivered some unforgettable renditions.

For Sydney’s melodic hardcore punks Hellions, March 2017 has become one of the most prominent months in the quintet’s history. This date signifies when the band were invited onto the show to perform and as drummer Anthony Caruso enlightens HEAVY magazine, an experience the five-piece will never forget for both the right and wrong reasons.

“It was one of the scariest things we have ever had to do as a band. We were really stoked on how it came together, but I mean writing something or changing one of our songs and stripping it back to that level put us very out of our comfort zone. It was definitely nerve-wracking but really awesome in a sense that now we have a bit more confidence to explore that level of artistry and experimentation with our music.”

Whilst the hesitation to reimagine the outfit’s hardcore punk formula into an acoustic setting of sorts would certainly create a stressful environment (they performed their single Thresher rather superbly). The “pressure” factor was only intensified further when Hellions decided upon Amy Shark’s remarkable song Adore to undertake in their own style.

“Truthfully, covering someone else’s song is really stressful; in our exact words when we began working towards it, we said: ‘We do not want to fuck this up’.” Anthony laughs – “If Amy (Shark) hated it we would have been devastated. It turns out she didn’t, she loved it which was awesome and a huge relief. But it was terrifying; I’m not going to lie. We had three different versions of it and we were so critical of ourselves that the closer we got to performing it, we were adamant that we could not do this.”
He elaborates further and intensifies his tone – “We had a mindset that we had fucked up and we were going to fail, we had no idea how we were going to pull it off. I think we did it though and it was to the best of our abilities (laughs).”

But, how do Hellions feel about the experience now in reflection?

“Honestly, it is just a really nice song and when we were discussing it we had a few different ideas, some of which were the polar opposite to what her music is like. In the end, we made the decision to do something that was completely out of our comfort zone and if we were going to do something this extreme, why not do it on live national radio? Haha!”

Although the undertaking pushed the quintet well into discomfort, the five men have walked away nationally embraced for their stunning effort and as they believe, better musicians for it.

“Not that we are going to do an acoustic record or anything like that, but it has opened us up to some more ideas. We know we are capable of doing something along those lines, so it may trickle into our future writing. It was a pretty insane experience.”

“Not that we are going to do an acoustic record or anything like that, but it has opened us up to some more ideas. We know we are capable of doing something along those lines, so it may trickle into our future writing. It was a pretty insane experience.”

National adoration is just the tip of the metaphorical iceberg which these New South Welshmen have deservedly attained with their third album Opera Oblivia. In fact, the record has achieved such monumental esteem that Hellions were recognised by the Australian Recording Industry Association and in turn awarded an ARIA nomination for Best Hard Rock/Heavy Metal album of 2016 (which sadly they were not victorious with). More importantly, however, how did this news sit with the five-piece when they were notified?
“Being nominated was beyond our collective belief. That alone was something we did not think would be on the cards for us for a few years, truthfully EVER! So it was hard to believe it happened, we were pinching ourselves because it was so mind-boggling.”

What about the ceremony?

“To attend the awards and be physically there and see everything and everyone, it was an absolutely insane night. I don’t think anyone left until the very early hours of the morning, or even late morning. It was so cool, we met people who we did not think we would ever meet and some people knew who we were which was extremely hard to fathom, we were baffled as to how they knew who we were. It was so crazy, we hung out with Shannon Knoll, Molly Meldrum and so much more; truthfully it is all a bit of haze to me sorry (laughs). It was very humbling and exceptionally fun, that’s the best way to describe it.”

Anthony continues with an elated voice – “We were half-expecting to be the odd ones out, but everyone was really welcoming. There was no hierarchy or anything like that, no-one had a ‘prima donna’ attitude and the ‘fame’ aspect was not apparent. Having the Violent Soho boys and DMA’S there helped break the ice a bit and allowed us to feel a bit more comfortable.”

Australia has actually been lower on the priority scale for Hellions at the beginning of 2017 as the band ventured overseas to tour Europe again. Not an outfit to shy away from a challenge though, the five-piece commenced a headline tour after their support run of friends in Deez Nuts and Comeback Kid; this again was a completely new enterprise and one which instigated some reluctance understandably.
“The response was excessively overwhelming. We went in with very low expectations and honestly, we had no idea what to expect, but we were very blown away by the whole adventure really.

“It was so nerve-wracking but exciting all the same. We just wanted to show those fans that attended our ability at our absolute best, because we were really thankful you know? It was completely humbling for people to come out to OUR shows rather than just seeing us as a compilation prize because we were supporting someone else (laughs).”

So Europe is accepting Hellions to a high regard?

“The UK is starting to feel like our second home, almost. I am kind of lost for words on how to describe it honestly, it was that good. It feels like it was a while ago now which is weird because it was only a couple of weeks ago, but I have a big smile on my face talking about it so it must have been amazing (laughs).”

Thankfully Australia is finally about to be rewarded with the band’s proper headline tour for the acclaimed third LP and while this is great news for the aficionados of the party punks, the band themselves are beyond delighted to take to their home nation’s roads again. In retrospect, this is completely logical, after three albums, supporting some of the world’s best heavy bands (Of Mice & Men, Enter Shikari), achieving a Triple J feature record, critical acclaim, global touring and numerous other achievements almost too exhausting to list – it is Hellions’ time to be the premiere act.

“It definitely feels that way especially with this tour we are about to embark on; it feels like we are now supposed to be at this point. I mean the UK headline shows were fantastic, but this upcoming tour is the one we are anticipating the most! We could have done it straight after the album was released, but we decided to wait on it for a little while, just to see how it was received and how the public reacted to it.”
He continues – “Now it feels like the right time and we are all jumping out of our skin; we are practically desperate to play these shows, in a good way. We are over the moon to play headline shows here and now that the record has been out for a while, it has just pieced together beautifully to launch it to the best effect you know?”

With their home town show selling out much faster than anticipated, the boys have added a second show to really thank their fans properly. However, there is an icing on the cake for the sequel: “We are performing both Indian Summer and Opera Oblivia in full; that was kind of an easy decision in the end. Sydney is our hometown and we were very overwhelmed with the response, to sell out the first show was pretty massive for us.”