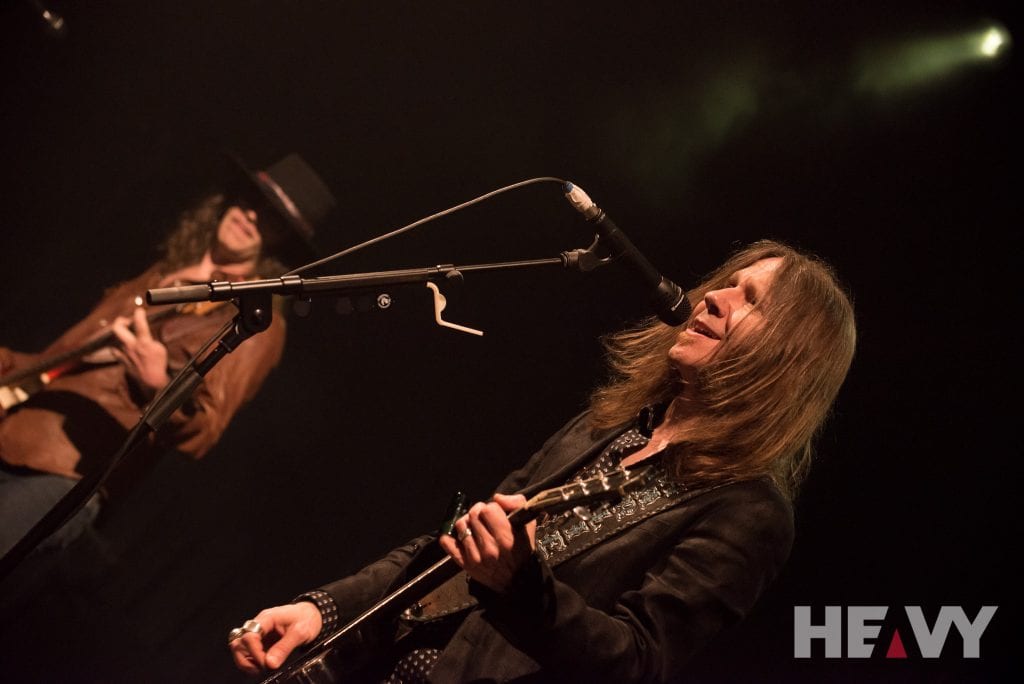 Blackberry Smoke’s Facebook page reads loud and clear ‘ALWAYS ON TOUR’. Although social media is an environment in which overly hyperbolic self-promotion is frequently brewed, this statement isn’t far from the truth. “We tour pretty much all year round”, confirms Blackberry Smoke’s frontman Charlie Starr.

Starr emits an aura that shines as bright as the gates of heaven and is undeniably making his way up the ranks towards the superior pedestals of southern rock royalty. However, Starr remains a gentle and humble soul. Upon discussing Blackberry Smoke’s latest album, Like An Arrow, the usually eloquent Starr stumbles over his words when attempting to explicate his recent experience of working with Gregg Allman. “I’d met him through a really good friend a handful of years ago, and he’s very… I mean it’s Gregg Allman”, effuses Starr. “Meeting him for the very first time was pretty heavy, ‘cos he’s very quiet, and he’s a little, not intense because he’s calm, but it’s just a heavy thing to meet Gregg Allman. He’s very serious and quiet, but very gracious.”

Allman’s shoulders aren’t the only ones Starr has rubbed with over the years. Eternally faced with comparisons to Lynyrd Skynyrd, Starr recounts memories made with the band themselves: “We’re all heavily influenced by [Skynyrd’s] music. Then it sort of all came full circle and we wound up playing shows with them and becoming friendly with them. It’s a little surreal at times, you know I’m like, I’m hugging Gary Rossington. It’s crazy.” And what value has Starr found in touring with southern heroes like Skynyrd and ZZ Top? “It’s not actually that we’ve learned anything from watching them. It’s that you learn how to tour yourselves”, professes Starr. “We learned how to play our shows and get out of the way and be efficient. Because you can’t be a part of tours like that and be loose cannons. You have to do your shit and be efficient with it. Do your job and move.”

Despite the explicit admissions that Starr is influenced by pioneers such as Skynyrd, Blackberry Smoke offer a neo-southern element to their sound that pushes the boundaries of prototypical southern music. The pleasure in debuting a new Blackberry Smoke record on one’s sound system is partly accountable to the uncertainty of what lies within the ridges of their vinyl records. “It’s our goal to make each record a different type of listening experience without sacrificing our sound. We don’t want to fall into the trap of being formulaic”, Starr asserts with definitive confidence.

Whilst such an approach can be praised in an industry that continually calls upon revampification, it is not without its critics. And unfortunately, with the incessant increase in virtual connectedness online, critics are now more abundant than maggots on necrotic flesh. “A lot of people now, thanks to social media, will complain but it’s like, you’re wasting your breath”, Starr chuckles, unruffled by such virtual hostility. “We’re gonna do what we wanna do. It’s not like we’re making a hip hop record. We’re not changing who we are, we just make a different record each time.”

Starr alluded to such fan disconcertion with regards to Waiting For The Thunder, the opening track on Like An Arrow. “I think the first time people heard it they were like ‘whaaaat, is this a Blackberry Smoke song? What is going on?’ But [the song is about] real life you know, I think that for people who are expecting to hear a drinking and party song, that’s not the one”, Starr speculates. Many people are quick to point the finger at Donald Trump when deliberating the subject of Waiting For The Thunder, as it encapsulates themes of power, upheaval and uncertainty. Apparently, we should not flatter Trump with such marked attention, though. “Somebody asked me the other day, ‘was it about Donald Trump?’ and I said no. No, it would be about the relationship between people of the world, and the world leaders – quote, unquote – and how scary the world is. It’s sort of biblical in a way, metaphorical”, posits Starr with the kind of trustworthy wisdom that tempts one towards nominating Starr himself for a world leader position.

Despite the tumultuous world we currently live in, Starr finds solace in his work. “[Touring is] really addictive. Sometimes when we play two shows in one place, it’s odd, you know it’s like, ‘we need to go’. I love it, keepin’ movin’. I love to go home too, of course, but as far as work goes, this is the best work I can imagine”, Starr says gleefully. But now that their UK tour has come to a close, fans are eager to hear Blackberry Smoke’s next studio venture, despite number one record Like An Arrow not yet celebrating its one-year anniversary. Are the blueprints for the next album set out? “I’ve got a bunch of songs written, maybe half [the album]. I haven’t been in a real big hurry. I don’t ever really stop writing. It’s always a process that’s spread over a large amount of time”, Smoke’s main songwriter Starr elucidates. “I don’t have the luxury of going ‘I’m taking a week off, I’m gonna go and write a record’, or however long it takes. I just gather the songs as they come out of the air.” Besides, you can’t rush perfection.