Dashboard Confessional mastermind Chris Carrabba seems like a happy-go-lucky guy, which is why the first thing it seems logical to ask him is why his songs are so damn sad.

“I will be the first to admit that plenty of them are sad”, he replies, “or explore how it feels to come out of the other end of being sad”. “I think it’s pretty well known that I’m a cheerful guy and I’m not a sad sack. But that’s because for all of those moments we all feel, when we’re feeling pensive, where you might get locked down or bogged down into one of those moments in your personal interactions, I have an outlet for that in song…obviously not everyone has that. So, I can pour it into a song and off my shoulders”.

Despite the gap between releases, Carrabba is continuing to work on new music for a prospective full-length dropping as soon as possible. Having said that, he hasn’t stopped releasing tunes, unveiling a covers EP for fans earlier this year that featured JB’s on two ends of the music scene spectrum: Julien Baker and Justin Bieber.

“I liked the Justin Bieber song”, he clarifies, “and I didn’t write a song that day and I wanted to record something, so I recorded it. The next day Cam from Sorority Noise was driving to meet Julien [Baker] to help her with her record. Julien is one of my best friends and Cam is one of my best friends, and Cam stayed the night at my house because his head lights were out so he couldn’t drive at night. And the next day they were in the studio together, so I recorded one of each of their songs, like “hey, look! I’m thinking about you guys”.

That was it, and that’s how Carrabba perceives his reason for making music sometimes – for the sake of enjoying himself. “The sheer bliss and enjoyment I get out of writing a song makes me long for it when I’m not writing a song”, he adds. “So it’s just what I do and it has a purpose”.

As made clear by his friendships, Carrabba isn’t shying away from the new crop of artists making waves in the scene, and he defines his excitement by sharing his thoughts on the “great groundswell of independent music, counterculture music, coming out of every youth culture right now”.

“I’m inspired by it. I don’t know that I’m specifically inspired by any once band because when I’m making a record, one of my rules is that I actively try to avoid contemporary music for fear that I might mistakenly appropriate somebody’s, not song or sound, but approach”. It’s a cycle, because when he finally does hear what he’s been missing out on, he’s inspired all over again. He adds that “one of the wonderful things” about the process is that “I get this massive deluge of new music all at once, I get this great, instant gratification. Which becomes inspiring. I probably start writing right away after that”.

Dashboard are hitting Australia for a tour next month, so the question remains as to whether Carrabba will use his trip down under to continue writing or whether the record is already done. Apparently, it’s “almost done”.

“The record may be done to be honest with you”, he notes, but he’s “not really ruling it out”. “We’ve written songs there, like I wrote a song called ‘Dusk and Summer’ while I was there because I was in a place that reminded me so much of this one spot in Florida…honestly, being in a foreign place makes you contemplative for things that are familiar. And there were these weird corollaries and the typography and the vibe of the people and all of that stuff. And all of a sudden I wrote this song and it ended up being the title track of one of our records”.

It’s interesting to wonder why Dashboard chose this time to come to Australia, amidst a clear intention to begin the flat-out cycle of a record release. “We really wanted to go”, Carrabba justifies. “We looked at the calendar and said if we wait to give traditional lead time, we won’t have the opportunity to go, and before you know it months and months will have passed and we wouldn’t have gotten to go to Australia”.

Despite all of the hype surrounding Dashboard over the years, and the loyalty that they’ve attracted from fans the world over, there is one thing that remains important to Carrabba, and it’s the meaning his songs have to his fans. “It may have meaning to them beyond the meaning that I thought I imbued in the song”, he argues. “And that’s when I really love a song. When I find someone else’s interpretation of it actually makes more sense than mine”. It’s a damn good thing no one is doubting that will continue to happen with what’s coming. 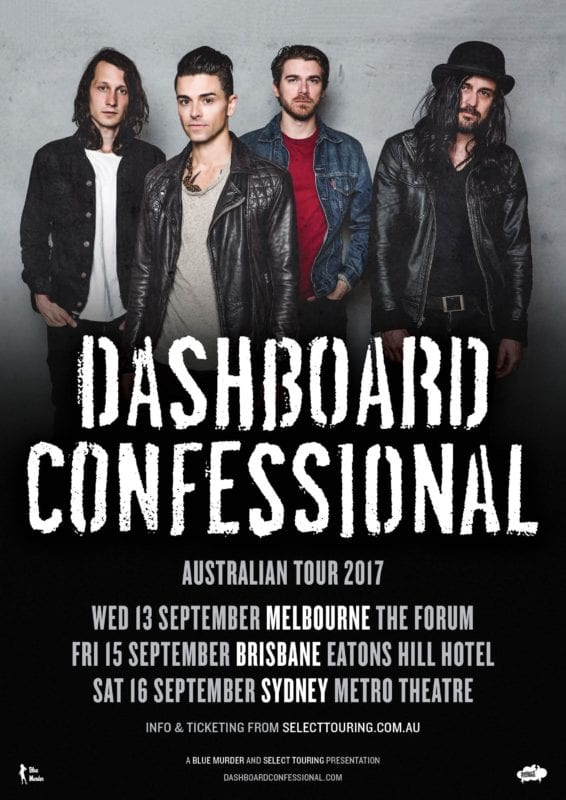