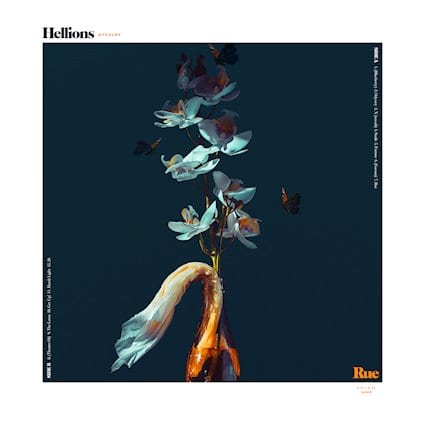 Sydney genre melding cool cats Hellions are set to release their fourth album Rue. It’s hard to believe knowing that the band’s incarnation was not that long ago (2013). It’s no secret, Hellions place themselves in a spin of genres musically and sonically, you never quite know what you’re going to get but one thing is certain, these (at times) sensual tunes will make you want to dance like nobody is watching you. With the producer described as the “fifth member of Hellions” Shane Edwards at the helm Rue is kind to the ear on all fronts.

Kicking off! From the get-go there is a real theatrical element within Rue, this is evident in the opening track “(Blueberry)” and later in the album on “(Cocoon)” and “(Theatre Of)”.  Each giving the album an intelligent flow from track to track.

“Odyssey” though it mixes in genres at the beginning it settles into a surf rock/hip-hop to sweet sounding track, the reason for this is the chorus vocal. Though Dre Faivre is the lead vocalist and takes care of the majority of vocal duties, which range from, yells to hip-hop to straight up gorgeous harmonies, Anthony Caruso (drums, percussion, vocals) Matthew Gravolin (guitar, vocals) and Josh Campiao (guitar, backing vocals) also add their fair share of vocals throughout the album.

It’s hard to call the backing vocals just that because they really offer more than vocals in the background. They add layers, harmonies and gang styles, this is evident on the first single “Smile” which features a looping layered vocal “I’m ready to run are you ready?” “Smile” musically and lyrically really grabs you and with lyrics like “If we can shut the fuck up, maybe we can learn to smile for once” it’s hard not to pay attention.

Dim the lights and get the candles out, title track “Rue” hits you right in the good feels, the tempo backs off and hearts get ah pumpin’. Lots of light/shade and the snare roles that Anthony Caruso adds to this track almost tip the epic scale right over.

Though the musicianship on Rue is something to behold “The Lotus” reaches the furthest heights, an almost tribal beginning breaking in and out of progressive/ hip-hop verse sections to gang vocal choruses. This track really takes you on a ride from start to finish.

Stand out tracks that can’t go unmentioned are “Get Up!” funky with splashes of progressive and hip hop. Followed by “Harsh Light” which offers a droning rhythm section by Caruso, Gravolin and Campiao in the verses. This track really elaborates on the “feel good” vibe within Rue.

The final track “26” follows a theme that is across all four of Hellion’s records, this is most likely very obvious to the diehard Hellions fans but I wanted to mention it none the less. “26” is a reflective track that signs off the album well.

Dre Faivre’s vocals have an obvious Australian accent on the album, it’s done in a way that’s not over the top but can be noticed. I point this out not because I’m making a patriotic statement rather a point of mentioning it because the vocals sound fantastic, they sit in the music really well and the phrasing and accents really pop from start to finish! Bravo Gentlemen!