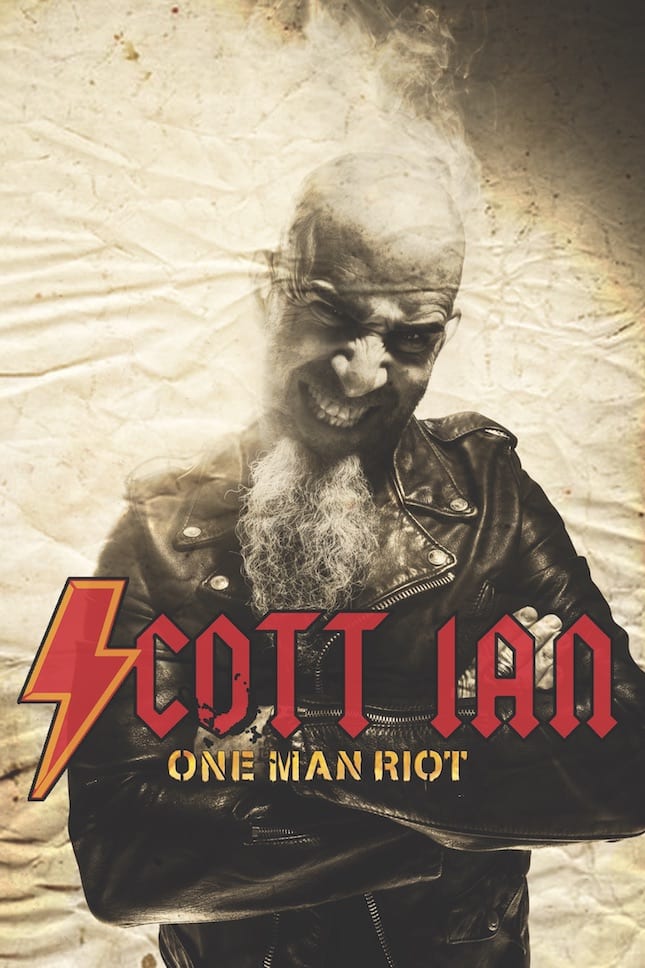 Last night I had the pleasure of listening to two hours of heavy metal anecdotes and stories from one of the pioneers of Thrash Metal and founder of Anthrax, Mr Scott Ian. I have been to several spoken word events in my life and all of them were hosted by Henry Rollins. I was both intrigued and a little excited to hear what sort of sordid tales Scott would share with us.

Ian is one of those few metal artists that has never been one to listen to or be influenced by what anyone else does—just Ike each of the Big Four who play by their own rules and don’t particularly care about what is going on around them.

Last night Ian started off by recalling a time, very early in his career, a well as his first overseas trip, finally escaping his mother’s basement bedroom to go to Europe for Anthrax’s first promo trip with Joey Belladonna and then band manager Joey Z. The story consists of meeting the team from Kerrang magazine, where they went for a drink to a “swanky” (as Ian thinks initially of!) pub close by the Kerrang office called the St. Moritz. Upon entering said establishment the five of them proceed to talk about getting some drinks in and conducting a non-formal interview chat of sorts. 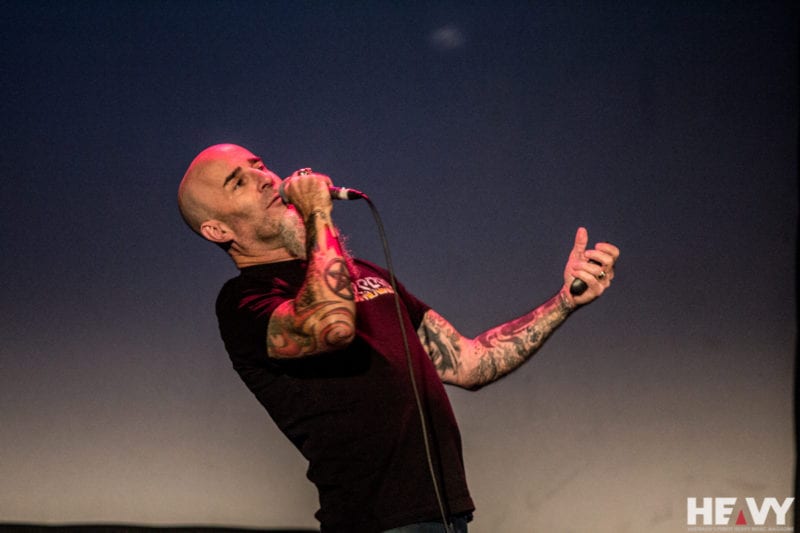 At this point, Scott mentioned he was roughly twenty-one years of age and had rarely left his bedroom let alone being overseas. As his “chaperones” organised themselves Scott reminisced on looking through the smoke-filled haze of the pub and then began questioning whether who he was seeing was really who he was seeing! Several “Is it really him? No, it can’t be him!” being excited, now apparently soprano, high voiced Scott Ian. This continued for a few sentences and then we were met with “It’s FUCKING LEMMY!” The crowd erupts into a well-restrained laughter to which Ian is taken aback due to our lack of being as excited as the twenty-one-year-old Scott was and meeting his hero, the one and only legendary Lemmy Kilminster. And here the story travels on.

As he tells his first story, Scott provided us with comic book style illustrations as a visual comedic backdrop. and referenced to give his tales a more plausible yet funny insight into what he thinks was going on and what was actually going on and it absolutely 100 % works, as often throughout the evening the fully immersed and adoring old and new heavy metal fans are in fits of absolute laughter and amazement. So for those of us here, we are treated to the very first night of how both Lemmy and Scott sat drinking at the bar of the St. Moritz, (Scott had only ever been drunk once in his life and tried to keep up with the hardened and well preserved liver of one legendary Mr. Kilminster,) Ian running from the bar at the end of his drinking capacity, falling into piles of trash, being kicked out of bed by manager Joey Z the next morning and then he invariably carries him through an English aeroplane terminal hightailing it to a boarding gate for Germany to continue on with the promo tour for 1985’s Spreading the Disease.

One of the things that we metalheads, whether old or new, love doing is reminiscing to anyone that will listen and telling that ONE, LIFE CHANGING MOMENT STORY about when we discovered and were gripped by the beautiful majesty that is HEAVY METAL! (Hell, I love telling the story about nine-year-old Metal V seeing ‘The Number of the Beast” video by Maiden on a Sunday morning new release video show.)

Scott continues on, with illustrative comic book evidence that he makes it Germany after having pretty much projectile vomited his entire insides on the plane and being told to get out, making it to his hotel room and in clear need of medical intervention. A Doctor visits the hotel room as requested and proceeds to entice one still inebriated, near alcohol poisoned, Scott Ian to be injected by a syringe with an unknown substance to bring him back to his spritely twenty-one year old, ‘never drunk a drop in his life’, self!

Fast forward a little and Scott proudly displays pictures for us all to see of the now infamous ‘Lemmy in short shorts pictures’ and asks the very valid question of why? Then the crowd is enlightened and told various quick anecdotes about how both Lemmy and Scott became and remained friends until Lemmy’s passing and the brief interludes of coming together again at various for the next thirty years. 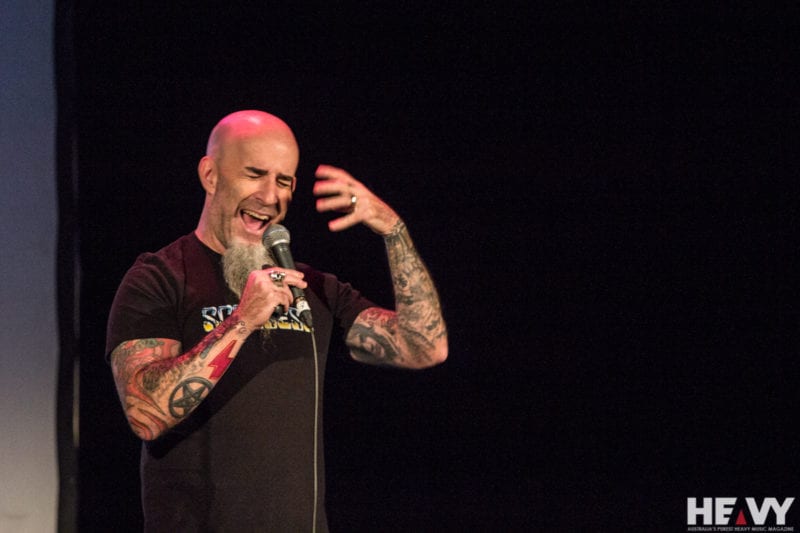 The Scott / Lemmy stories went on for around forty-five or so minutes and then there was a brief Q & A and the first question, OF COURSE, was about Dimebag and of the one and only mighty Pantera, to which Ian respectfully said he’ll “put a pin in that” and come back to it. A few more questions were asked and one, in particular, was about the one and only late Cliff Burton and a few quick tales on three years of mischief they managed to find themselves in.

Some of us in the audience couldn’t hear the questions as there wasn’t a microphone being passed around, but after the quick Cliff tales, Scott ventures back to the first audience member question which was in reference to none other than Dimebag Darrell and Pantera.

Now…At this point, Ian was totally taken aback because when the backdrop picture of Dimebag popped up on the big screen, there was this haunting and absolute reverential silence. Scott questioned both himself and the crowd, doubling back and looking at the screen to make sure the picture of Dime was actually up! He simply asked that why we would give a restrained laugh at Lemmy and complete silence for Dime? The few shouts from those of us present were because it was out of respect for the absolute legend and revered guitarist. Ian at this point gathered himself and rationalised the crowd’s love, respect and no offence intended. Then onwards Ian proceeded to tell us all the story is in his book, Access All Areas, but assures us it is better told by the man himself. I won’t give anything away, but the tale is hilarious and involves a prank played on Scott by Darrell and includes the late Dave Williams of Drowning Pool. The story is is based on one of the many wild evenings at Dimebag’s house and features heavily one Sebastian Bach of Skid Row, a KISS pinball machine, the pet goat in the pool and notorious NYPD. The hilarity that ensues from then on in and the three-year plot for revenge was amazing. As was the near three-hour reflection on a heavy metal legends career and his hilarious anecdotes.

This is my first review of a spoken word gig and I hope I have given enough to entice you to buy one or all of Scott Ian’s books or at the very least look up one of his shows and I sincerely hope I have done it and him some kind of justice.

I am pretty sure we all left the MCEC happy and fulfilled. I know I definitely was and now I just can’t wait to hear Bruce Dickinson do his spoken word event in a few short weeks 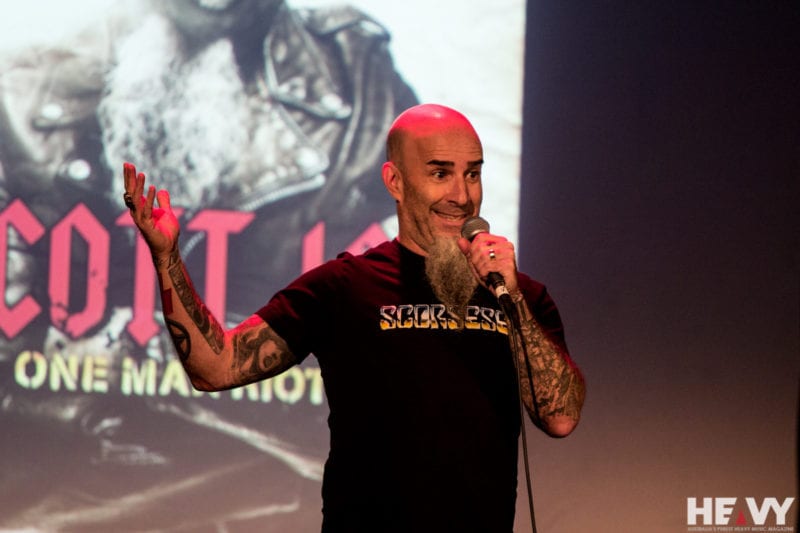 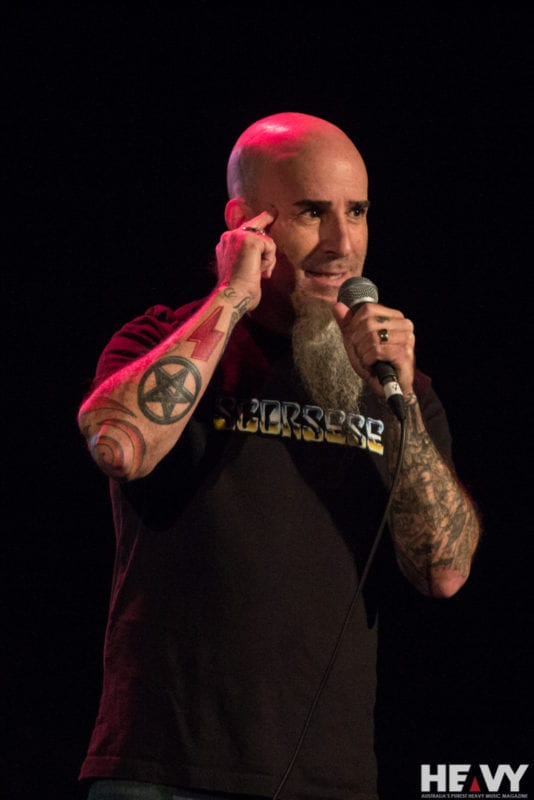 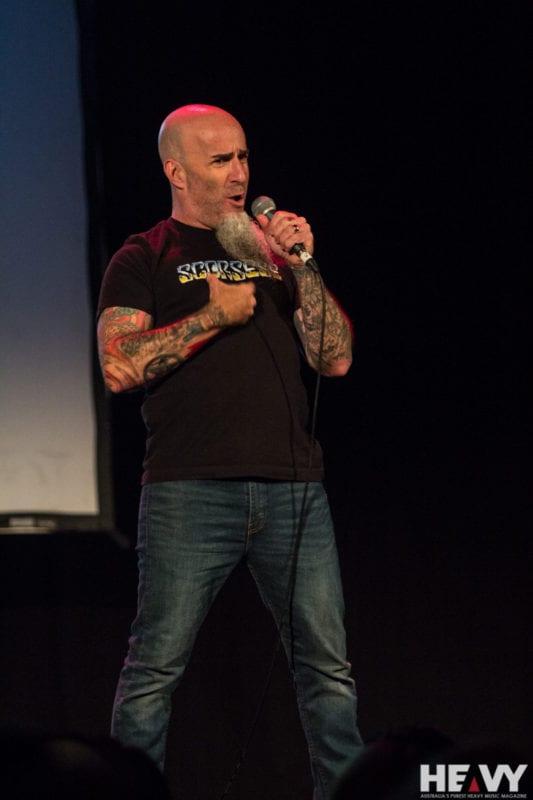 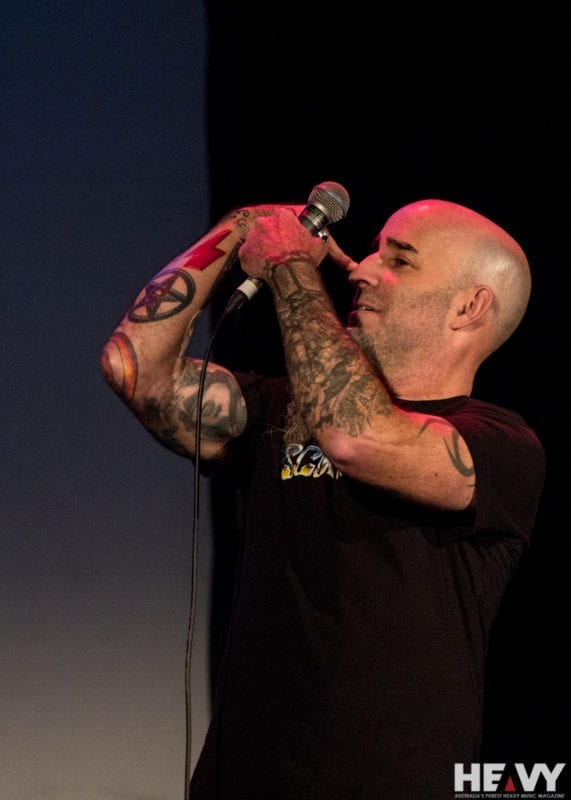